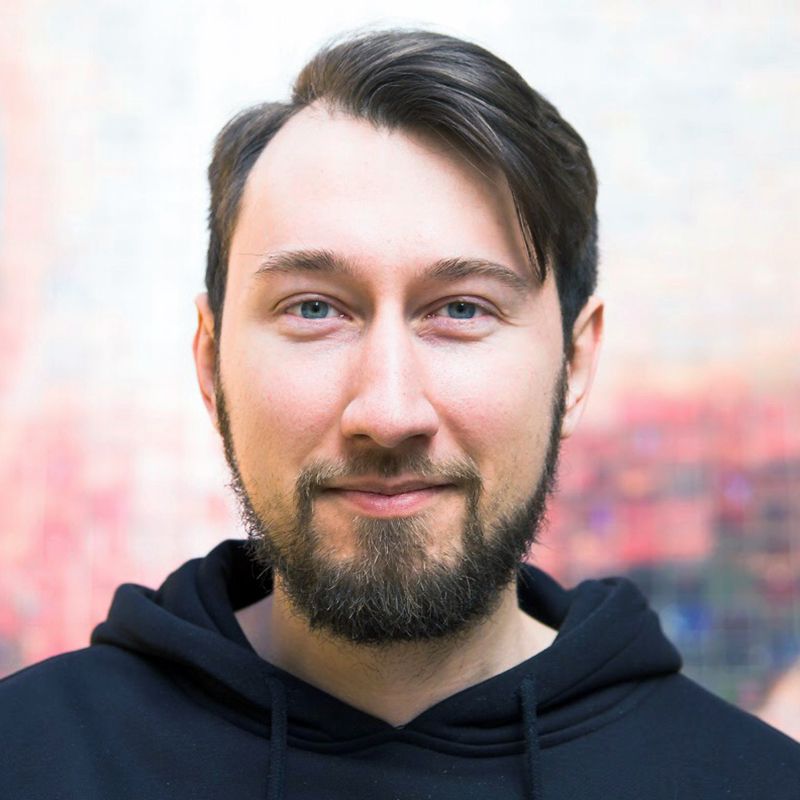 Web security is a topic that is often overlooked by frontend developers. When we assess the quality of the website, we often look at metrics like performance, SEO-friendliness and accessibility, while the website’s capacity to withstand malicious attacks sometimes falls under the radar. And even though the sensitive user data is stored server-side and significant measures must be taken by backend developers to protect the servers, in the end, the responsibility for securing that data is shared between both backend and frontend. While sensitive data may be safely locked in a backend warehouse, the frontend holds the keys to its front door, and stealing them is often the easiest way to gain access.

“The responsibility for securing users' data is shared between both backend and frontend.”

There are multiple attack vectors that malicious users can take to compromise our frontend applications, but fortunately, we can largely mitigate the risks of such attacks with just a few properly configured response headers and by following good development practices. In this article, we’ll cover 10 easy things that you can do to improve the protection of your web applications.

Before we start improving website security, it is important to have some feedback on the effectiveness of the changes that we make. And while quantifying what makes something “good development practice” may be difficult, the strength of security headers can be measured quite accurately. Much like we use Lighthouse to get performance, SEO and accessibility scores, we can use SecurityHeaders.com to get a security score based on the present response headers. For imperfect scores, it will also give us some tips on how to improve the score and, as a result, strengthen the security: 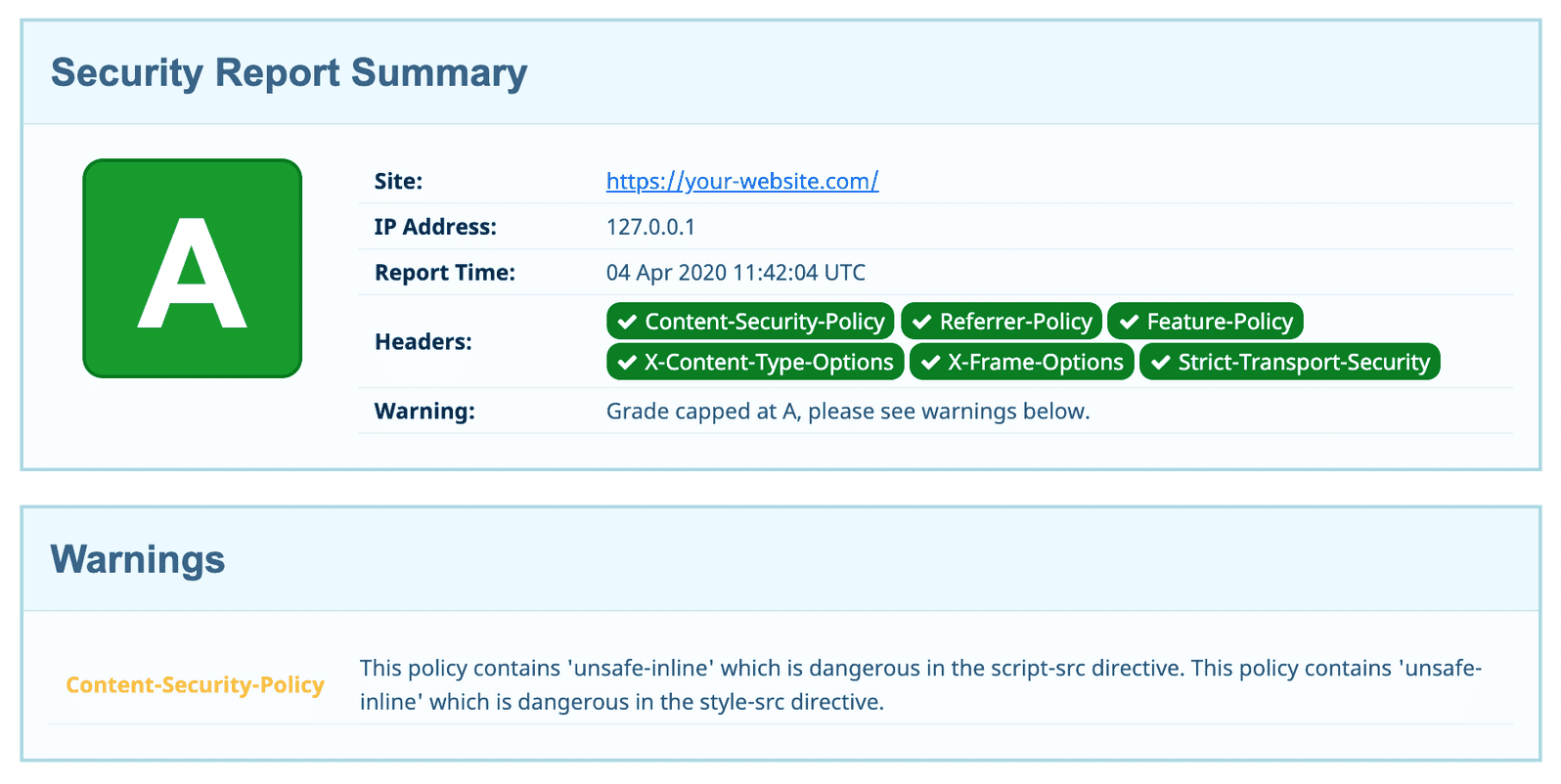 The highest score that SecurityHeaders can give us is “A+”, and we should always try to aim for it.

Sound content security policy (CSP) is the cornerstone of safety in frontend applications. CSP is a standard that was introduced in browsers to detect and mitigate certain types of code injection attacks, including cross-site scripting (XSS) and clickjacking.

Strong CSP can disable potentially harmful inline code execution and restrict the domains from which external resources are loaded. You can enable CSP by setting Content-Security-Policy header to a list of semicolon-delimited directives. If your website doesn’t need access to any external resources, a good starting value for the header might look like this:

Here we set script-src, img-src, style-src, and connect-src directives to self to indicate that all scripts, images, stylesheets and fetch calls respectively should be limited to the same origin that the HTML document is served from. Any other CSP directive not mentioned explicitly will fall back to the value specified by default-src directive. We set it to none to indicate that the default behavior is to reject connections to any URL.

However, hardly any web application is self-contained nowadays, so you may want to adjust this header to allow for other trusted domains that you may use, like domains for Google Fonts or AWS S3 buckets for instance. But it’s always better to start with the strictest policy and loosen it later if needed.

If malicious code does get injected from user input, we can instruct the browser to block the response by supplying "X-XSS-Protection": "1; mode=block" header.

Although XSS protection mode is enabled by default in most modern browsers, and we can also use content security policy to disable the use of inline JavaScript, it is still recommended to include X-XSS-Protection header to ensure better security for older browsers that don’t support CSP headers.

Clickjacking is an attack where the user on website A is tricked into performing some action on website B. To achieve this, a malicious user embeds website B into an invisible iframe which is then placed under the unsuspecting user’s cursor on website A. When the user clicks—or rather thinks he/she clicked—on the element on website A, he/she is actually clicking on something on a website B.

We can protect against such attacks by providing X-Frame-Options header that prohibits rendering of the website in a frame:

Alternatively, we can use frame-ancestors CSP directive, which provides a finer degree of control over which parents can or cannot embed the page in an iframe.

Part of good security practice is restricting access to anything that is not needed for the proper use of our website. We’ve already applied this principle using CSP to limit the number of domains the website is allowed to connect to, but it can also be applied to browser features. We can instruct the browser to deny access to certain features and APIs that our application doesn’t need by using Feature-Policy header.

We set Feature-Policy to a string of rules separated by a semicolon, where each rule is the name of the feature, followed by its policy name.

Smashing Magazine has a great article explaining Feature-Policy in great detail, but most of the time you’ll want to set none for all features that you don’t use.

When you click on a link that navigates away from your website, the destination website will receive the URL of the last location on your website in a referrer header. That URL may contain sensitive and semi-sensitive data (like session tokens and user IDs), which should never be exposed.

To prevent leaking of referrer value, we set Referrer-Policy header to no-referrer:

This value should be good in most cases, but if your application logic requires you to preserve referrer in some cases, check out this article by Scott Helme, where he breaks down all possible header values and when to apply them.

6. Don’t set innerHTML value based on the user input

Cross-site scripting attack in which malicious code gets injected into a website can happen through a number of different DOM APIs, but the most frequently used is innerHTML.

You should never set innerHTML based on unfiltered input from the user. Any value that can be directly manipulated by the user —be that text from an input field, a parameter from URL or local storage entry —should be escaped and sanitized first. Ideally, use textContent instead of innerHTML to prevent generating HTML output altogether. If you do need to provide rich-text editing to your users, use well-established libraries that use whitelisting instead of blacklisting to specify allowed HTML tags.

Unfortunately, innerHTML is not the only weak point in DOM API, and the code susceptible to XSS injections can still be hard to detect. This is why it is important to always have a strict content security policy that disallows inline code execution.

For the future, you may want to keep an eye on a new Trusted Types specification which aims to prevent all DOM-based cross-site scripting attacks.

Modern UI frameworks like React, Vue and Angular have a good level of security built into them and can largely eliminate the risks of XSS attacks. They automatically encode HTML output, reduce the need for using XSS-susceptible DOM APIs and give unambiguous and cautionary names to potentially dangerous methods, like dangerouslySetInnerHTML.

8. Keep your dependencies up to date

A quick look inside node_modules folder will confirm that our web applications are lego puzzles built out of hundreds (if not thousands) dependencies. Ensuring that these dependencies don’t contain any known security vulnerabilities is very important for the overall security of your website.

The best way to make sure that dependencies stay secure and up-to-date is to make vulnerability checking a part of the development process. To do that, you can integrate tools like Dependabot and Snyk, which will create pull requests for out-of-date or potentially vulnerable dependencies and help you apply fixes sooner.

Third-party services like Google Analytics, Intercom, Mixpanel and a hundred others can provide a “one line of code” solution to your business needs. At the same time, they can make your website more vulnerable, because if a third-party service gets compromised, then so will your website.

Should you decide to integrate a third-party service, make sure to set the strongest CSP policy that would still permit that service to work normally. Most of the popular services have documented what CSP directives they require, so make sure to follow their guidelines.

Special care should be taken when using Google Tag Manager, Segment or any other tools that allow anyone in your organization to integrate more third-party services. People with access to this tool must understand the security implication of connecting additional services and ideally discuss it with their development team.

10. Use Subresource Integrity for third-party scripts

For all third-party scripts that you use, make sure to include integrity attribute when possible. Browsers have Subresource Integrity feature that can validate the cryptographic hash of the script that you’re loading and make sure that it hasn’t been tampered with.

It’s worth clarifying that this technique is useful for third-party libraries, and to a lesser degree for third-party services. Most of the time, when you add a script for a third-party service, that script is only used to load another dependent script. It’s not possible to check the integrity of the dependent script because it can be modified at any time, so in this case, we have to fall back on a strict content security policy.

A safe browsing experience is an important part of any modern web application, and users want to be sure that their personal data remains secure and private. And while this data is stored on the backend, the responsibility for securing it extends to client-side applications as well.

There are many variations of UI-first attacks that malicious users can take advantage of, but you can greatly increase your chances of defending against them if you follow the recommendations provided in this article.