Think you’re missing out on genuine connections with the people around you? Bonder agrees. And it’s here to help.

This is not another social app. In fact, Bonder goes against the norm, leaning on its firm belief that everything out there is a repackaged variation of the same old. What you get with Bonder is a novel communication platform that hosts meaningful connections, bringing people together in more purposeful ways—thereby distinguishing itself from the somewhat superficial network found on other platforms.

Let’s take a look at Bonder in action. Open up the platform, check who’s around, see what they’re looking to discuss, do, learn… and find powerful new connections. Then, using unique tools like Private Circles, your contacts swiftly become more organized. Your network grows richer with people you trust. And soon, you’re more in tune with your community than ever, resulting in real-life contributions rather than futile screen time.

But that’s not all. More and more retailers are utilizing Bonder to offer extremely immersive experiences by connecting shoppers with departments, discounts and individuals who can offer the most relevant help. With this thoroughly unique offering, Bonder highlights the core advantage that brick and mortar stores have over e-shops: the human experience.

In 2017, STRV met Bonder’s Founder and CEO, Scott Swanson. As a Silicon Valley local with almost two decades of global infrastructure experience, Scott was armed with a profound concept and was quickly able to secure a number of notable investments. The next step was ensuring that his ambitions, as well as his investors’ finances, land in the safest hands possible.

To offer insight into his experience with STRV, Scott was kind enough to sit down with us for an interview. A self-proclaimed high-maintenance guy that never settles with good enough, this tech-savvy businessman is always expecting the best. Luckily, STRV jives well with that kind of mentality. We’ll let Scott provide the details. 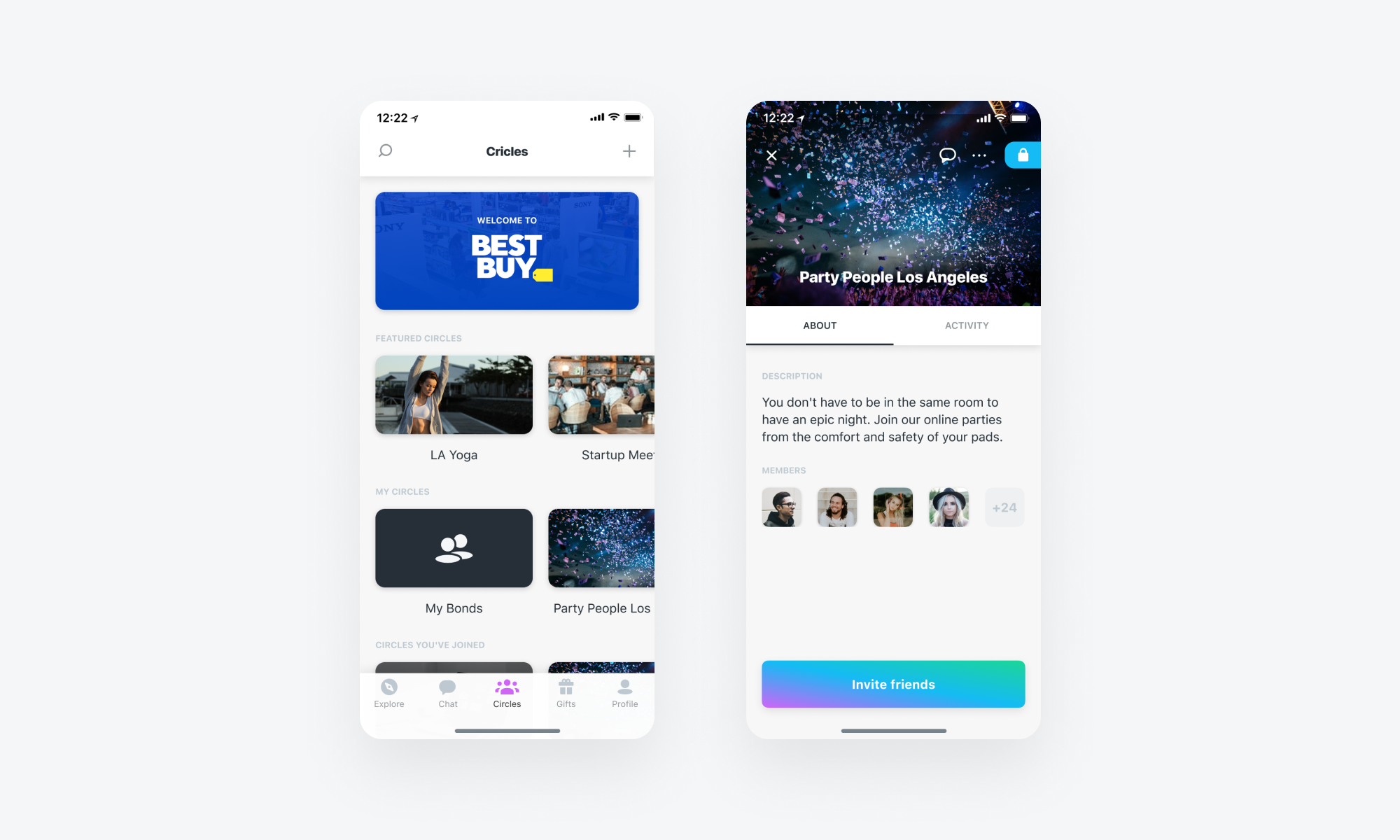 Let’s start with your journey of choosing a tech partner. You’re a man with limitless connections, a veteran of the trade. What was your decision process, and what made you certain that STRV was the answer?

I called a couple of friends that were high up at companies like Uber and Twitter, people that ran projects, and I heard STRV’s name more than once. I knew they weren’t the least expensive, but it was a matter of, ‘How can I protect my investors’ investment?’ If my vision is to be the Rolls-Royce of platforms, I want the best development team, the best code, the best end result. Every little thing matters to me. So, after repeatedly hearing STRV’s name, I did reference checks, had long conversations with people that STRV had done work for, and the feedback was just nothing but spectacular.

Which project stage was Bonder in when you joined forces with STRV? And how did the scope of our partnership take shape early on?

I had a small team of designers when I went to STRV, and I was really happy with what we had designed. But STRV’s response was, ‘Huh. It’s good, but it could be improved. We would rather have our own designers propose their ideas to you because we think that we can make this even better.’ And I’m really glad I listened to them. They made me something that, even today, is more futuristic than it is static. Even small details make a big difference between your app looking old or fresh.

At this time, I had a certain amount of money, and I could have gone to another company and gotten the whole thing built for probably all of it. Or I had STRV here saying, ‘Listen, we’re probably going to consume all of this money in just design and focus groups.’ I decided I would rather go this route, raise more money, and do it right. I wanted to have something that’s absolutely unique. 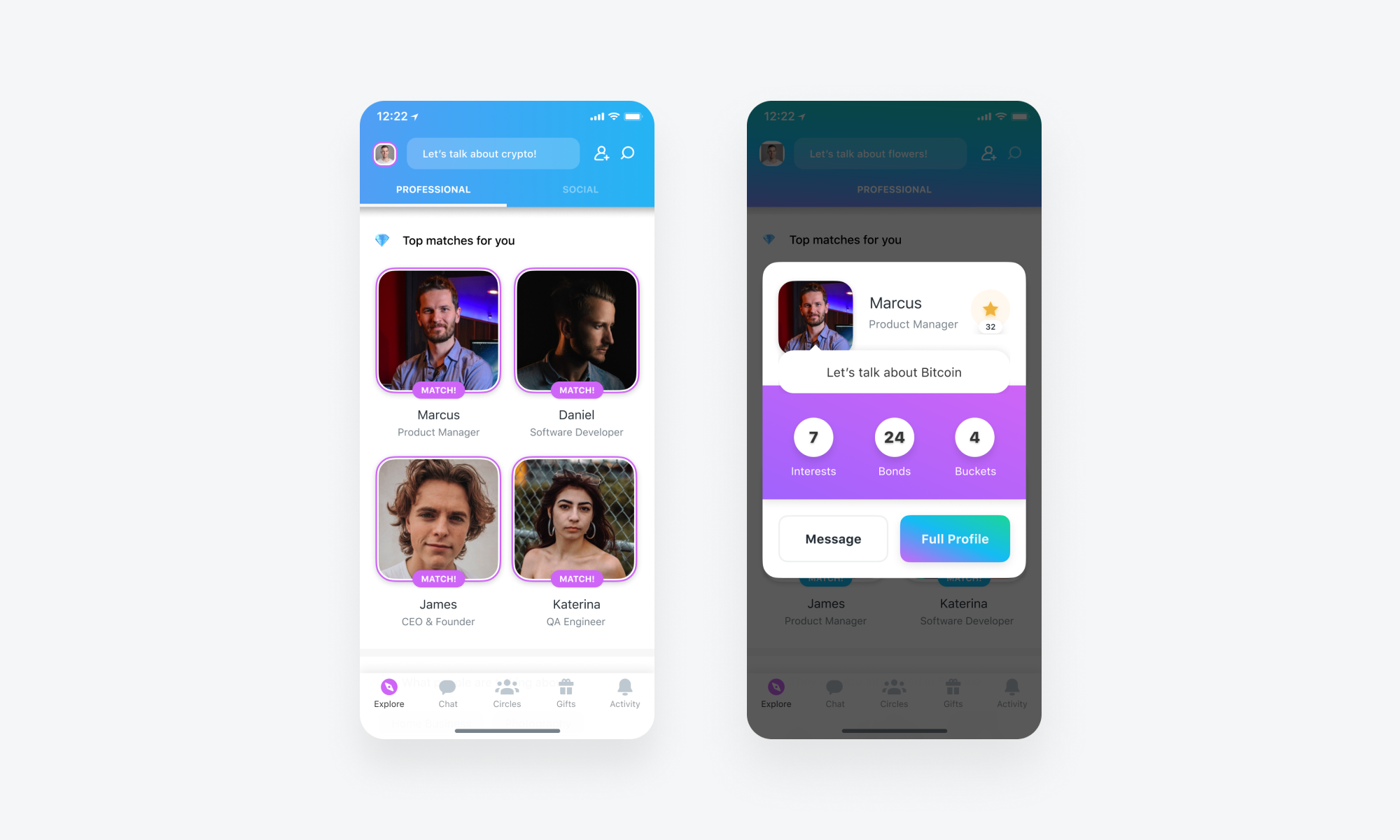 After three years of working side by side, how would you describe the collaboration with the STRV team?

Across the board, the execution has been excellent. And I’m very particular about everything; I wouldn’t say I’m the easiest person to work for. But the level of the team’s professionalism makes them a fantastic company. STRV never came back to me to say, ‘We can’t do that.’ Nor have they struggled with anything. It was more about them asking, ‘What’s your dream? What’s your budget?’ And I really appreciate that.

Who knows what kind of nightmares other people are having with horrible code or teams that just can’t build it right. I haven’t experienced any of that. Sure, I’ve cut STRV big checks, but I’ve got a great product - one that I can trust, and there’s a great team behind it that I can trust, too. It becomes addictive.

During Bonder’s highly complex stages of development, did your needs evolve in any way as the app came alive? And do you feel you’ve achieved all you’d hoped?

Thanks to the decision I made with STRV, I can look at my investors and say: I did the right thing, I hired the right team, I built the right product. I did it right.

I probably drove STRV’s development team crazy. I wouldn’t let certain things not exist in the app which I knew belonged there. Bonder’s a big app, but it’s not a lot of things. It’s a few pillars that come together in a certain way. I needed a social side, a business side, gifting and contributions - because I needed an ecosystem that people are going to be able to rest in. And if I didn’t provide any one of those things, Bonder wouldn’t be Bonder.

I was able to go to my investors and say I did it all and, yes, it cost more… but in the scope of development, I have friends that are raising $30 million and their products aren’t even built yet. Meanwhile, we’re ready to generate revenue. Our product is alive and I feel good about it. That’s why I went with STRV. They allowed me to sleep well at night, and to know that if anything had gone south (which it hasn’t), my investors could say, ‘You know what, he did his best.’ 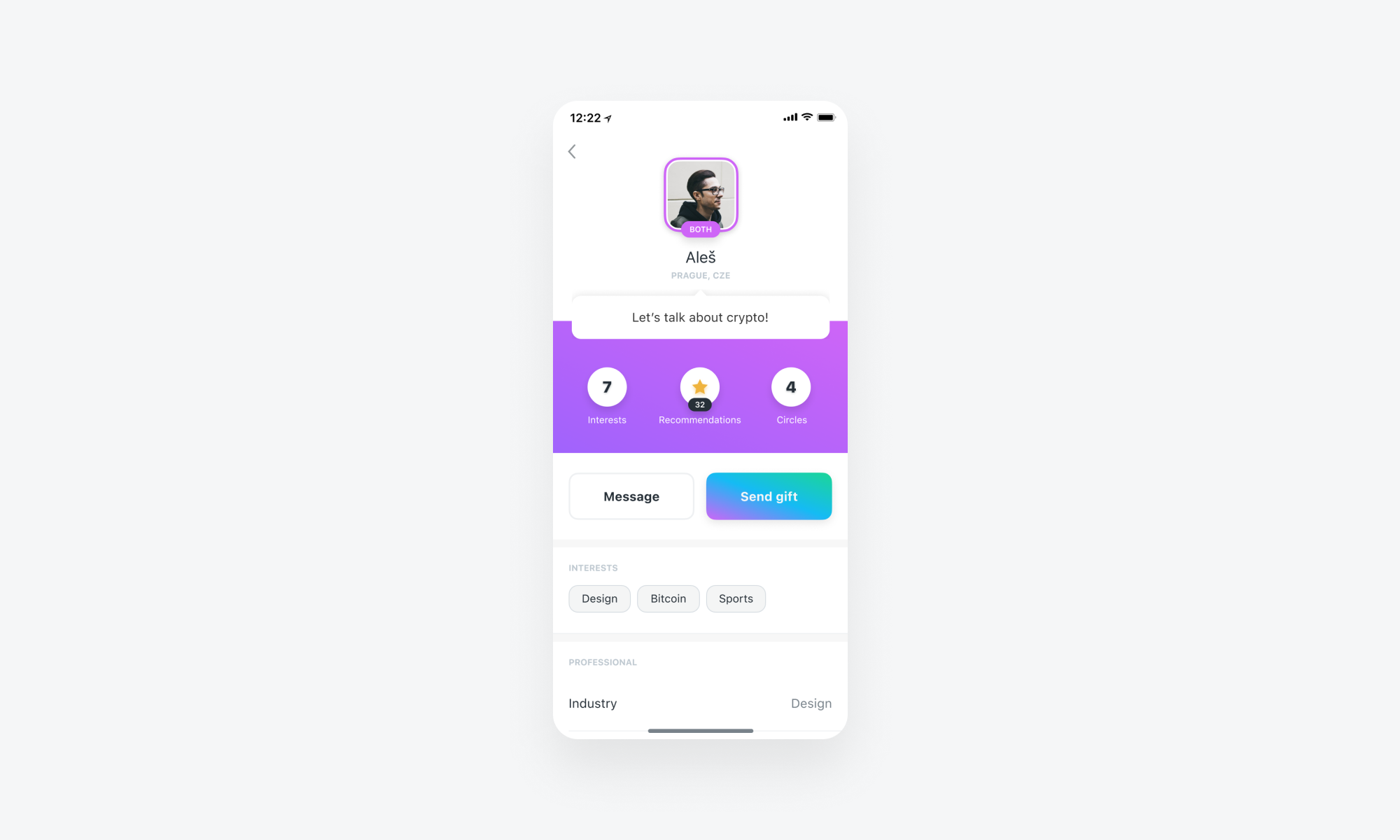 On journeys as long as Bonder’s, occasional obstacles are inevitable. For you, there was a moment between investments when you needed to take a short pause. How do you feel this was handled from STRV’s side?

We went through a little period of stagnation. That’s when [STRV CEO] Lubo and I sat down and had a conversation. Here’s a guy that’s running a company, but he found the time to say, ‘Listen, I believe in you. I believe in Bonder. And I’m going to help you punch this up and soon, we’re back in action.’ That is a very cool, beautiful thing to do. He put wind in our sails again.

And then, for the team to pick back up and adjust to whatever shifting needed to happen - they were able to do it seamlessly. You’d think people coming in and out of a project would be disruptive, that the continuity of our efforts was going to shatter. But that never happened.

Can you please tell us a bit more about the project? Specifically, what do you view as Bonder’s identity, its purpose in action?

We’re conscious innovators in the world of tech. We can be the Apple of communication platforms. Hard to envision when you’re not at critical mass, but it’ll be way clearer in action: Somebody walks out their door, they drop their range in Bonder down to 20 miles, go into professional mode and find a CEO in the automotive industry that wants to talk about cryptocurrency with people between the ages of 18 to 45.

Bonder’s WHY is to challenge the world of innovators to think differently. We’re uncensored. We’re ad-free. We don’t monitor, we don’t collect data. A user is not a data point to us. We’re all the things that people are starting to want in the world of human interaction.

We’re going to bring people into a world where we say, ‘Listen, you can come here and start rebuilding a network of contacts to change your world.’ This isn’t a place to post pictures and wait for likes. This is a different, immersive experience that you enter with intention. What do I need to achieve today, and how can I do it efficiently? Bonder is meant to be a utility, a tool for building and rebuilding networks of purpose.

Why can’t technology deliver one human being to another the same way we do lattes, cars and TVs? Because we haven’t yet asked it to do so. Until now. 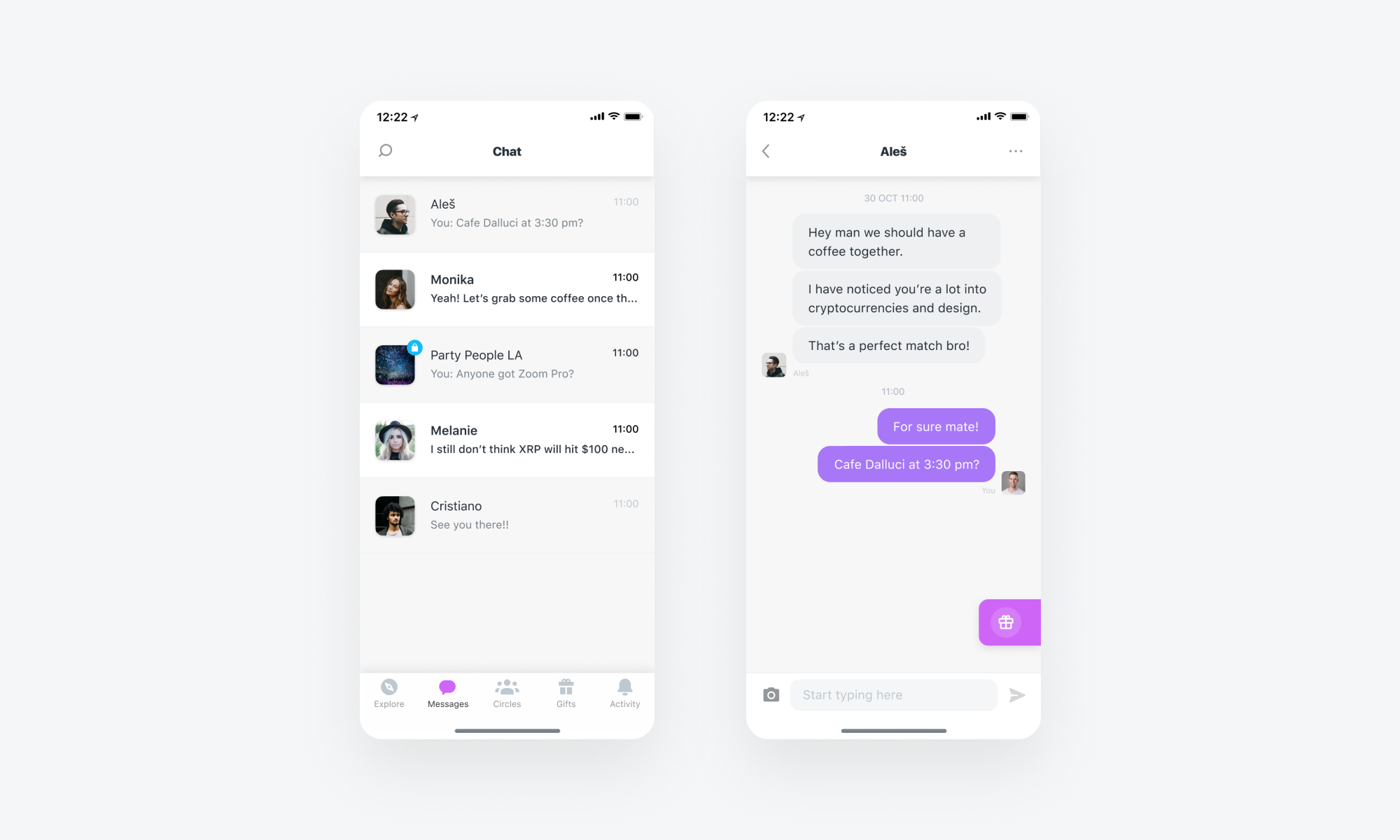 Looking into the future, how would you define the community Bonder hopes to build at a massive scale?

We’re an ecosystem of do-gooders, getting things done. The goal is to bring people into an environment where we’re all here to support each other. If I’m on the platform, I’m active, I’m showing others which mode I’m in and even what I want to talk about at that very moment, I can have a comfortable first encounter with someone near me. It’s not about interests. Those aren’t enough, and they won’t get me to walk up to you. But with Bonder, you’re telling the world, ‘I’m here, and I’m open to having a conversation.’ It’s very instant. You get a clear suggestion of people that you can say Hi to, and it could be the beginning of a great friendship.

Bonder has the ability to achieve way more than any of these social apps could ever achieve. My vision is one of people becoming better connected to the world, to those around them and their environment. We are the platform that actively concierges their world as they move through it.

And speaking of the future… Do you feel confident in relying on STRV going forward?

I feel like STRV’s ability to achieve anything, any vision that we have, ensures that we'll be working together in the future.

Want to know even more about this project? Or do you think STRV might be the right partner to propel your idea forward?