Held annually in Barcelona, Spain; Codegram's, Full Stack Fest, is a week-long language-agnostic development conference with an eye on the future.  STRV was there. These are our takeaways.

1. The Ins and Outs of Full Stack Fest

Their motto is simple; bring back the web. As FSF's co-founder, Josep "Txus" Bach puts it, "We put the emphasis on web technology.  Native apps for one reason or another are tied to corporations with closed platforms. We see the web as a way out of this. This is why (Full Stack Fest) mainly showcases topics such as peer-to-peer and decentralized web apps."

The conference's five-day experience was split into three core blocks with the first two days focusing on backend, a day off for the community to explore Barcelona, and then another two days mainly tackling frontend.

Full Stack's speaker line-up this year featured a highly curated cross-section of international CEO's, artists, as well as developers and engineers working across the stack.  Talks ranged from the practical, like optimizing frontend performance and building peer-to-peer web apps, to the more forward-thinking, like decentralized IoT and the new Web Authentication API.  Here are a few of the presentations we found particularly inspiring.

In Andre's own words, "The times we live in have made it necessary to disrupt mainstream social networks," and Scuttlebutt aims to do just that.

The Scuttlebutt off-the-grid network effectively works offline by saving the data of the people you follow locally onto your device and then continuously syncing when you connect to the internet.
Unlike with traditional centralized systems like Facebook or Twitter, Scuttlebutt (a protocol of the Node.js hacker community), doesn't have a dedicated server or website — meaning there is no single company with control over the network.

One of the many things which makes Scuttlebutt uniquely interesting is how it deals with and distributes information.  On standard social networks, once someone shares a bit of info that info has the ability to uncontrollably spread like wildfire and, at times, with zero accountability.  As the information spreads, it can also become convoluted and incorrect, eventually deteriorating into little more than a bad rumor or nonsense.

With Scuttlebutt, on the other hand, a user's shared information is secured with cryptography and is registered in their diary.

To send a private message, a user must only record their encrypted message in their diary, thus keeping it invisible to just anyone with access.  The authenticity of the diary is preserved as well as all diary entries referencing the message previously written. This is a brilliant method for preventing the tampering of information and also makes replication profoundly easier.

In 2015 Pinterest had a decision to make: invest more in their mobile site or force users to download their native app (which metrics showed was the better choice).  After making the decision to let the mobile site die, Zach explained how his team learned the hard way that what the metrics couldn't predict was people's distaste for forced app downloads.

After a wave of bad reviews poured in it quickly became apparent that a complete redesign of their mobile experience was in order. They knew that if they wanted to stop hemorrhaging potential new users, the mobile site would need to to function like a native app in the browser, so they rebuilt it from scratch as a Progressive Web App (PWA).

For Zach and his team, successfully implementing their PWA came down to a couple core concepts: Reduce, Reuse, Review.

Reduce -  For them, the goal was to shoot for less than 200kb of Javascript for initial page loads. You have to be very careful with how big your JS is and especially how much you're sending.

Reuse - Pinterest's magic formula came down to a combination of using Service Workers in conjunction with Precaching and Runtime Caching.  Or as Zach put it, Cache, Cache, Cache!

Review - Realizing that even the most lightweight framework gets bloated over time, the Pinterest team set budgets which they regularly audit with Google’s Lighthouse as well as performance metrics. Zach made sure to mention where developers usually go wrong in this step is thinking that once something is fixed, it's fixed for good. Things can easily regress. Stay vigilant!

After revisiting their mobile web metrics a year later, well…. there was quite a different story.   They saw a 100% increase in weekly active users (over 300% in India), and mobile sign-ups increased by 843% yearly.  As Zach put it, “when you get metrics like that, you’re rolling in the cash!”

The Full Stack Fest conference was held in the lovely Les Corts district of Barcelona. We flew into town a day early with hopes of having a nice, cold beer on the beach while taking in some of the sights. Much to our surprise, however, the watered down Spanish beer at most restaurants just wasn’t doing it for us (living in Prague, we have a pretty high standard for beer). Fortunately, on the way back from the beach, the STRV team found a pub called the El Tap near the hotel where we could finally enjoy a proper craft beer.

Additional activities offered during the week included renting bikes and segways, going on group runs through the city, paddle boarding, an Ethereum programming workshop, and also tapas and beer sampling.

All-in-all the STRV crew had a wonderful time in Barcelona. We’d like to offer a thanks to all of the Codegram staff and speakers for organizing an excellent event and look forward to checking it out again next year. 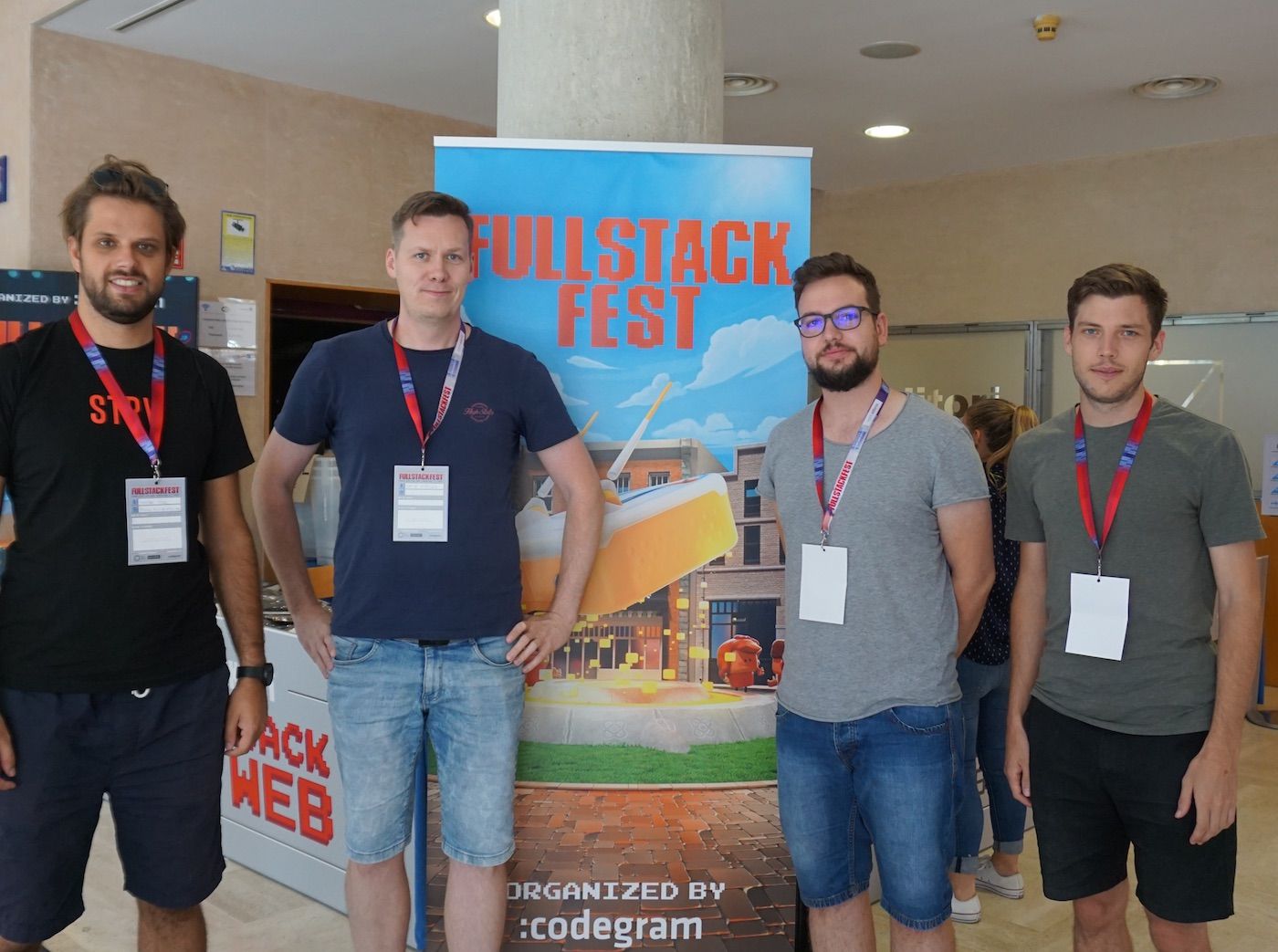