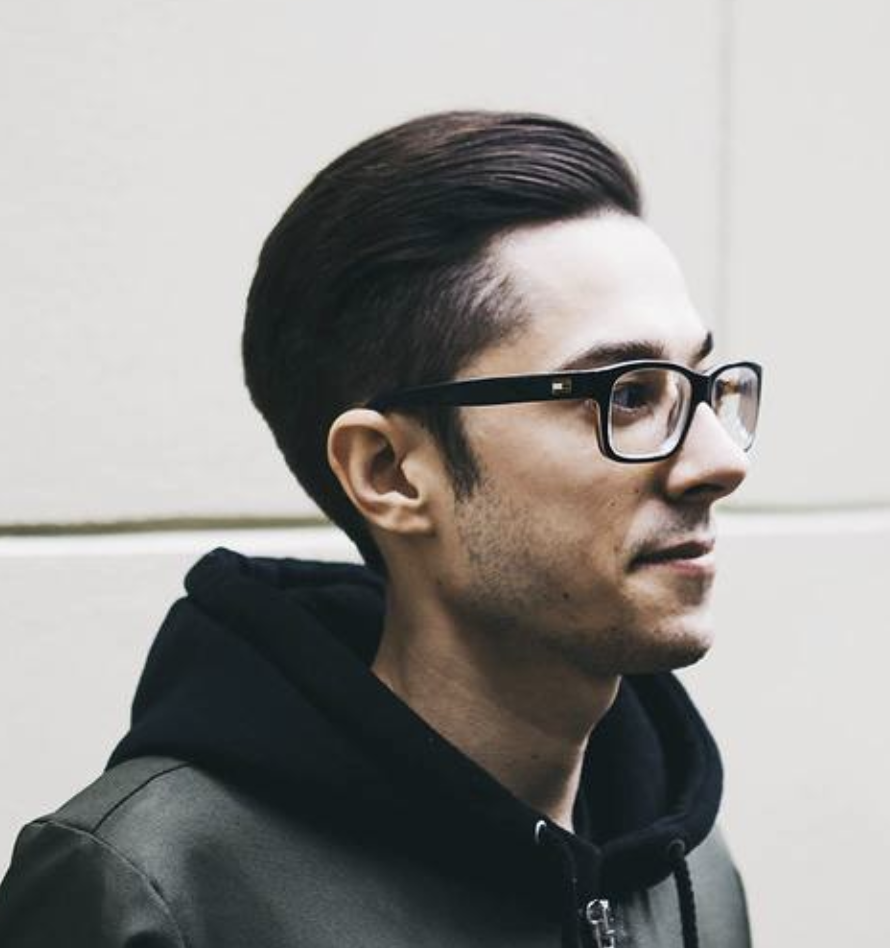 A behind-the-scenes look at the design process behind our company’s holiday gift this past Christmas.

At STRV, getting creative with absolutely everything we get our hands on is sort of our “thing.” The freedom we have to explore uncharted territory on client projects translates into what we do internally. Our events tend to be thematic down to every detail, our office is a world of its own and our merch… well, it’s not exactly a logo-and-go type deal. If our people are going to wear STRV apparel, it has to be something they’d buy. If it’s something they’d buy, it needs to be valuable. And if you’re going for value, you better put in the effort.

That’s exactly what our design and marketing teams did for our most recent merch endeavor. We put in the effort. And we’re happy to share the result.

…Here’s how we made it, and what it represents.

Committed to the STRV tradition of giving ourselves something special every Christmas, our 2019 brainstorming sessions began well in advance. After considering a few options, we decided that adding to our ever-growing collection of custom-made company merch was the way to go. It would be exclusive. Internal only. A great gift for the entire team, and a cool way to end the year.

New merch may sound pretty simple, but sticking our company logo on whatever we could find in a catalog isn’t what we’re about. At STRV, we choose brave ideas over easy. And this was the perfect opportunity to do just that.

With a few signature pieces hanging in our closet already—such as the Brave Human Inside hoodie, the Zero Bugs Given shirt and, most recently, the Winter Merch series—we wanted to outdo ourselves. So we aimed high.

To reflect the past year, we wanted this 2019 gift to emphasize unity, inclusivity, mutual respect and company culture. The values that are amongst the most important to us as a team.

Getting this idea across, and doing it right, required special care. The challenge was figuring out how to put those values into something tangible, something which would let us all proudly represent STRV and its message.

COMBINING THE PIECES INTO ONE BIG IDEA

Together with our marketing team, we began searching for a theme and the right angle.

During one of our design & marketing team syncs (which we actually decided to do biweekly thanks to the productivity of these merch sessions), we came across the “leavers jackets” concept. It’s a trend that sounded almost too simple at first. But the more we began exploring the context and how we could utilize it, the more it started to make sense.

For those who aren’t familiar: leavers jackets are often made by students after graduation. It’s a way to honor the community they’d built, a symbol representing inclusivity and a souvenir to remind them of their school years.

To decide if we could play with this concept, we first had to settle on the message we wanted to convey. It needed to be something that would resonate well with the entire team and would set the tone for the year to come. Thanks to STRV’s sense of community, we figured this out quite quickly.

The goal became to communicate the feeling of inclusivity, to combine this with the personalized nature of each piece and to incite a sense of owner's pride. Straightforward and honest. All that was left was making sure we could achieve it. 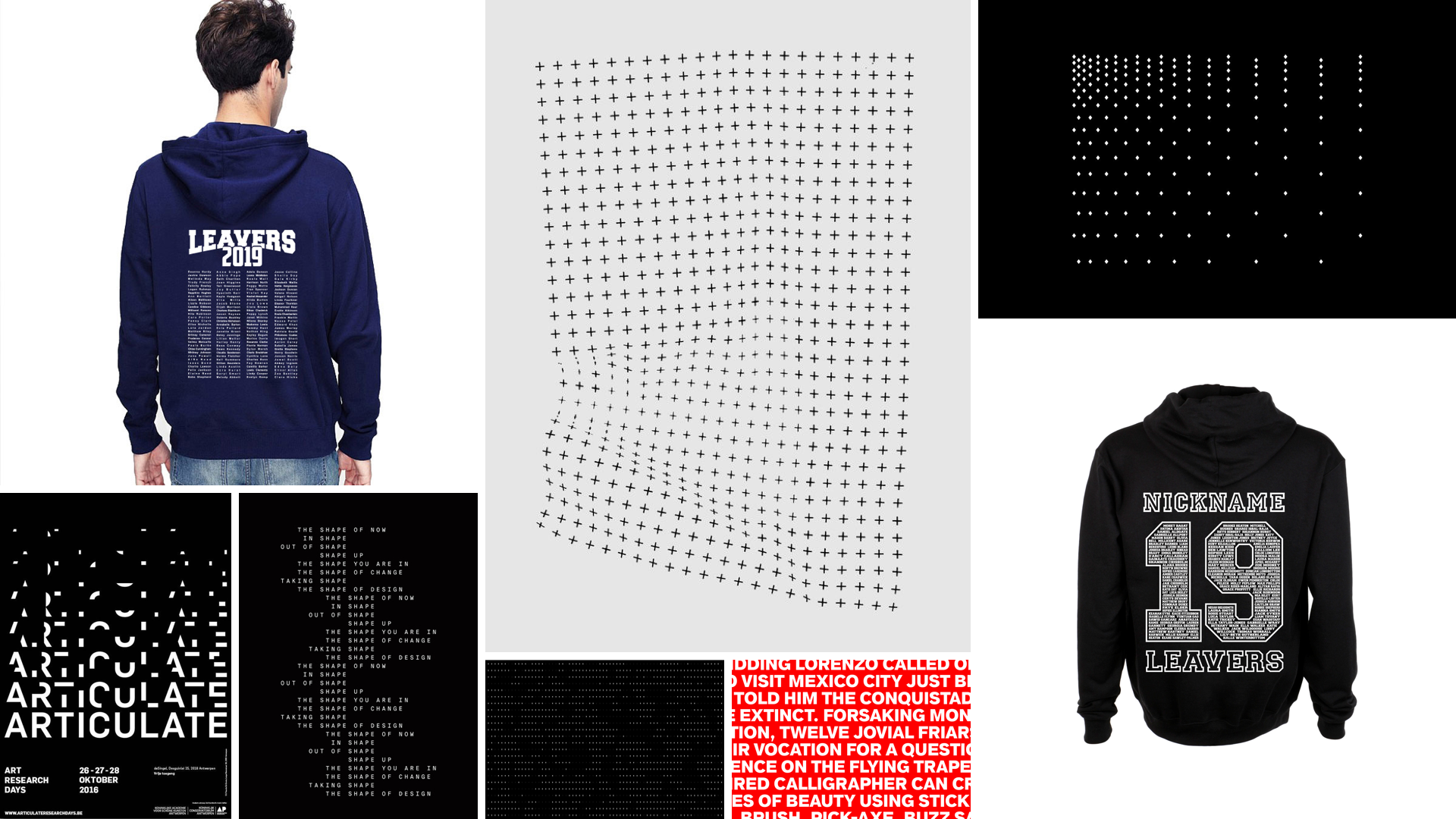 Design mood board for crewneck.

The leavers jackets idea kept coming back to us. We began exploring the various ways we could approach it and, together with Tom Vranek—who handled the design aspect—we created and presented multiple variations of the layout.

The main visual that tends to be on leavers jackets is a list of names. We took that and simplified it by using only initials. This gave us more flexibility, and it meant we didn’t need to worry about having to choose a miniscule font size to fit all names into the print area. Both frontside and backside print options were tested, along with various shapes of the “initials grid,” and we reviewed everything with the team in search of the best fit.

Since we had quite a lot of control over the entire production process, we were given the space to play with a few details that may seem small, but that have a big impact.

One of those details was highlighting each merch owner's name in the list of initials, which was the answer to our dilemma of how to best personalize each piece. It also allowed us to incorporate the cursor symbol, a unifying brand identity component which represents the restless curiosity of everyone at STRV: always thinking, always moving forward.

By adding the cursor symbol in combination with the highlighted initials, we wanted to say that the person—the owner of the piece and a member of our team—is restlessly thinking, just as we all are. This represents the inclusive community and team culture found at STRV.

To finish the look, we included some basic company info at the bottom part of the crewneck, making the whole layout feel complete.

At the very end of the design phase, after all of the stakeholders were fully on-board, it came down to playing with spacing, font size and scale to find that sweet spot of absolute visual balance. Only then did we send it all for test printing. 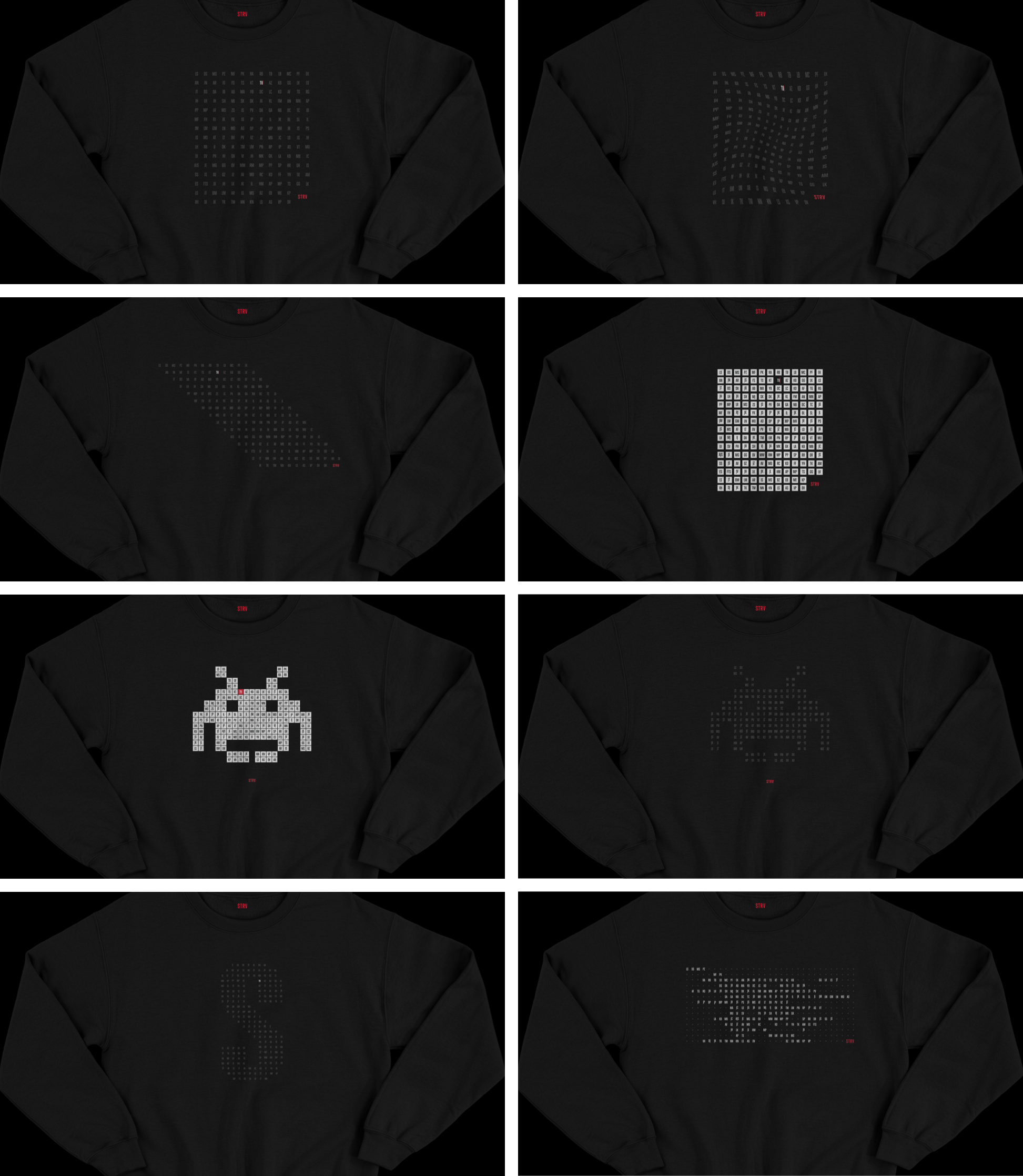 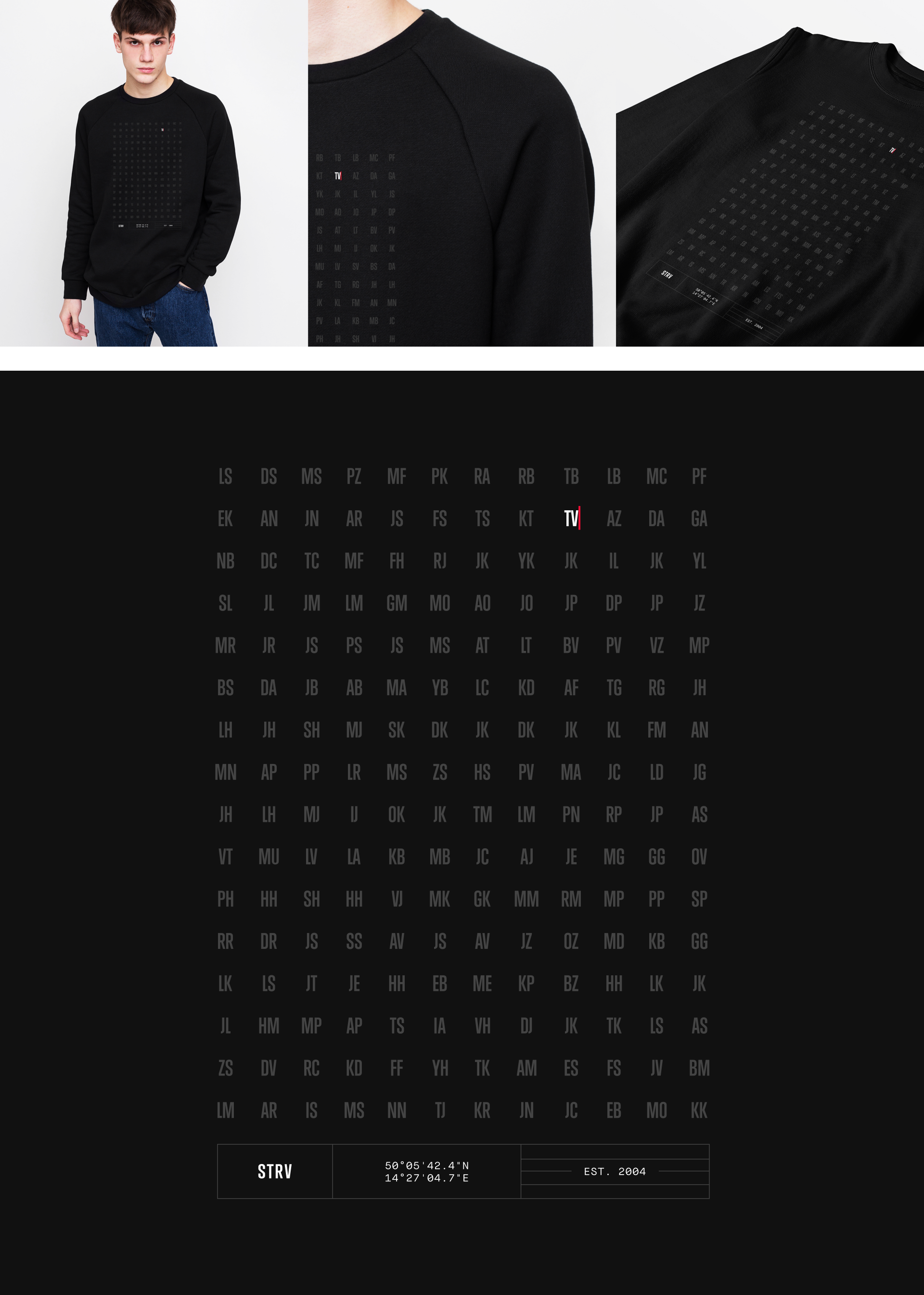 JUST IN TIME FOR CHRISTMAS

We made sure to have our gifts ready for STRV’s final All Hands company meeting, which was followed by our Christmas party. Every single crewneck came in a custom eco-paper wrap with “Santa's message,” as well as its own Christmas bag. Following updates regarding company news, future plans and announcements during the meeting, our team was told to check under the Christmas tree.

After weeks of design and production, the 2019 Xmas Sweatshirts finally found themselves in the hands of our fellow team members, and the excited reactions were exactly why going the extra mile is worth it every year. 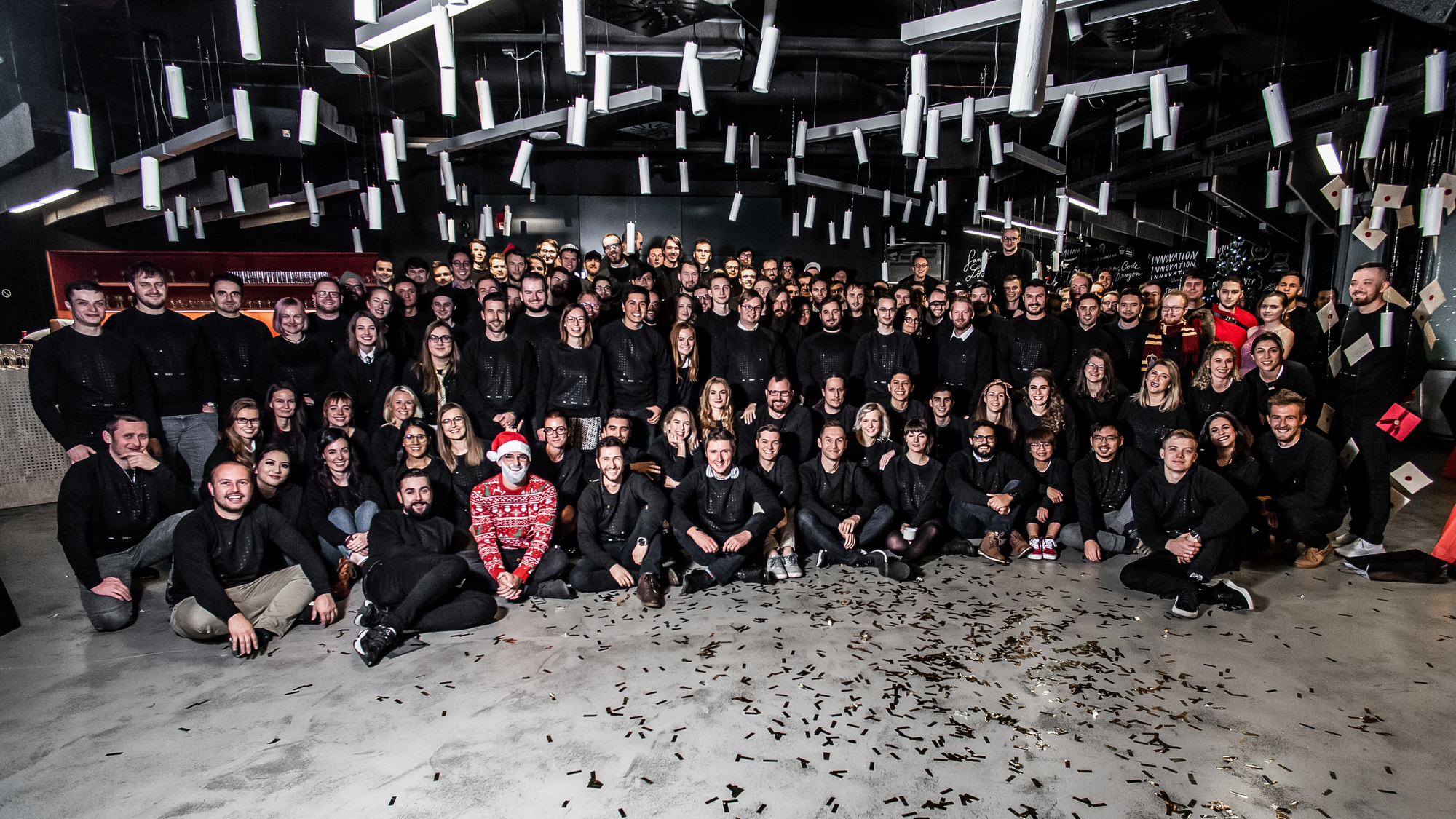 Group photo of our team just a few minutes before the Harry Potter themed party.

From the get go, the plan was always to keep this project internal only. But following enthusiastic feedback from our team and external people who’ve seen the crewnecks, we decided to share a look at the process and outcome with all of you guys, too.

A few photos could probably do the job, but we thought, “Why not have fun with it?” So we went ahead and shot a short promo video for our company’s (and personal) social profiles.

With the help of video producer Nela and our “pro” models Linda (copywriter) and Roman (designer), we shot some footage in various spots around the office. No big production or a specific idea in mind, but more of an improvised session based on the evening’s vibe and our brand identity.

You saw the result at the very beginning of this article, you’ve now heard the whole story and, hopefully, we’ve left you feeling inspired to get creative with your merch (or just personal pieces). Why go simple when you can go different? 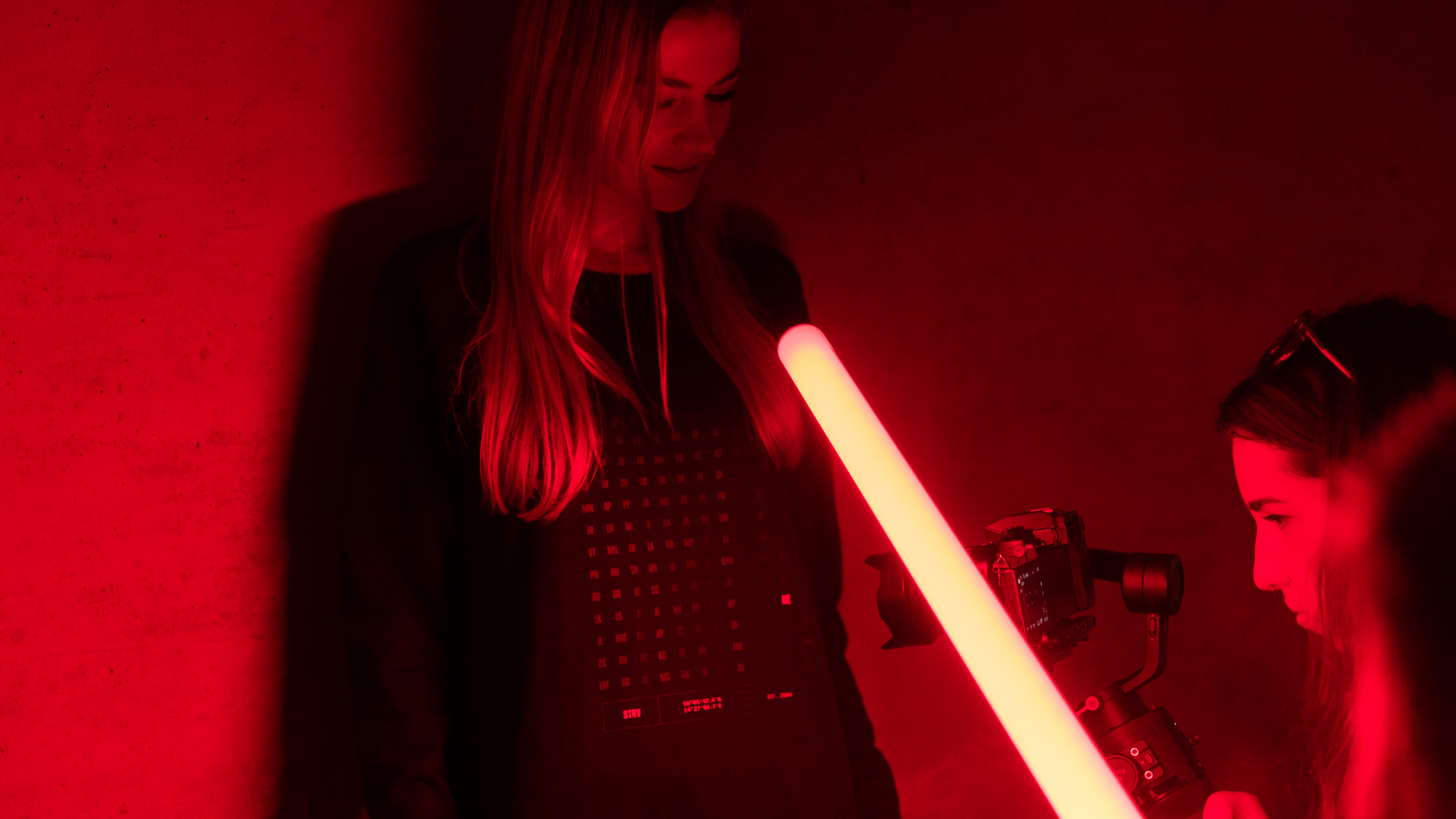 A behind-the-scenes shot while playing around with neon lights.