With more than $60 million in funding from the likes of Dapper Labs, Metaversal is doing something right. The venture studio invests in and co-produces NFT projects, and its CEO and co-founder Yossi Hasson joined us to share his experiences with web3, discuss DAOs and address NFT misconceptions.

At this point, you’ve probably heard that we hosted the Next Level Talks: NFT – Beyond the Buzzword event in our Prague office on May 28th. Maybe you were even in among the almost 200 people joining us in person.

The full event lasted for more than two hours — plus a solid Scrollbar afterparty — so we’re splitting the wrap-up into three parts. You can check out the Decentraland summary and stay tuned for part three, Scavenger Land. Now back to Metaversal.

Thank you to TheFutureParty community for their question, included below. 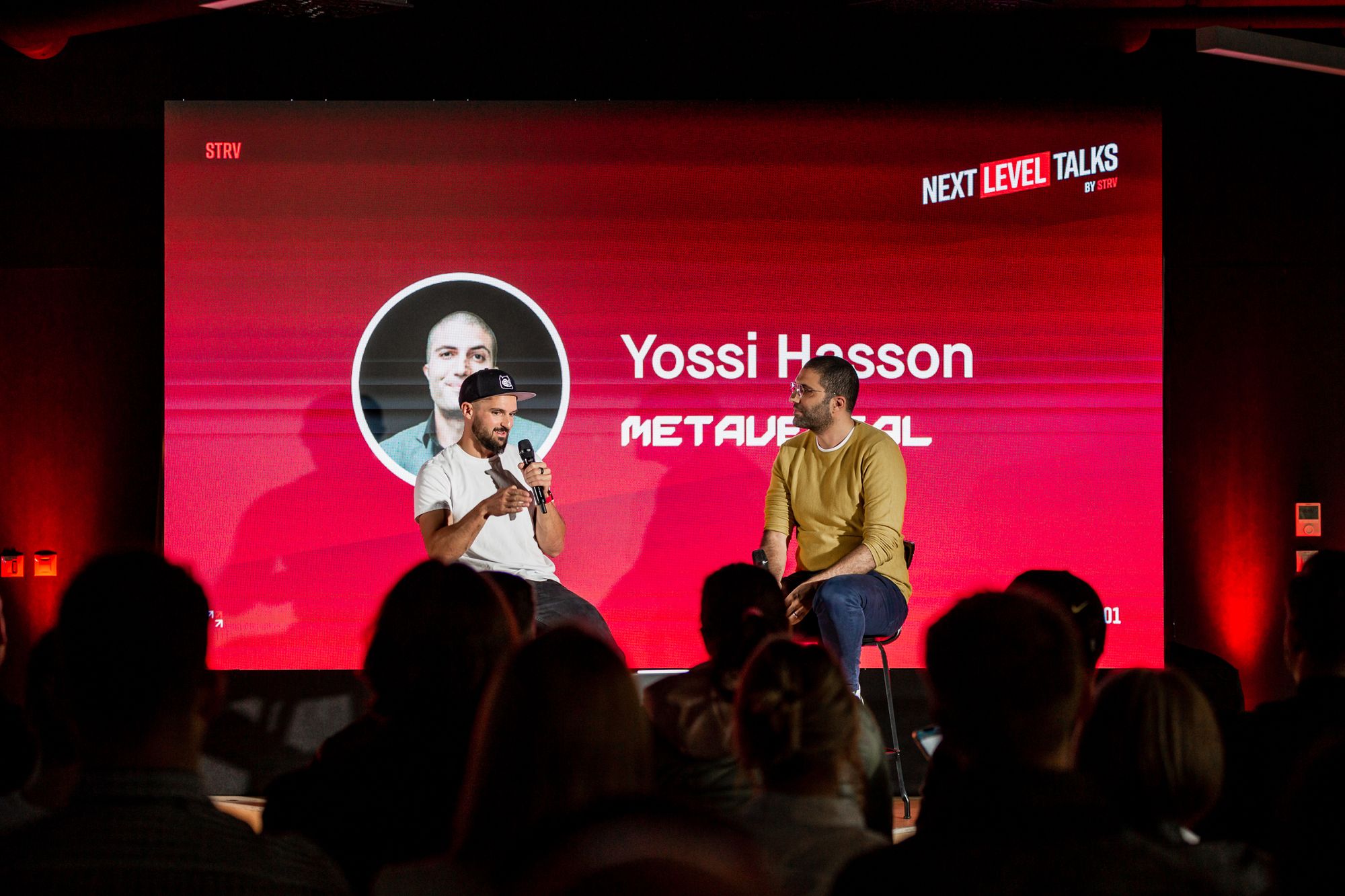 An established tech entrepreneur, Yossi started one of the first open-source cloud companies in 2004 and gradually learned about Bitcoin. That got him interested in the idea of an incentive that can sit on top of open-source software.

Cue a nine-year journey of investments into blockchain and Bitcoin companies. Eventually, NFTs entered the scene and Metaversal was born, coming in with a bold pitch.

“This is the biggest opportunity that we have seen today, using that digital asset and ownership idea. The rules are yet to be written and there are few people who can write those rules. So we need $50 million to be one of the people to write those rules,” Yossi recalled.

Metaversal’s ambitions are investing in the assets being produced, having a team capable of figuring out which assets will stand the test of time and helping creators and artists by being the partner that can translate any story or vision into a web3/metaverse/NFT strategy — with the ability to fund it, produce it and bring it to market.

NFTs: A Buzzword Worth the Hype?

“They’re a buzzword for the right reasons,” Yossi began, solidifying his stance that the bad rap based on the notion that NFTs are “a hype, a flash in the pan, or it’s going to disappear and people are spending stupid amounts of money” isn’t representative of reality.

So why is he convinced that those arguments are wrong? Yossi believes they come from people who haven’t really grasped the fundamentals of what NFTs can represent.

“It is going to possibly disrupt every industry that you can think of,” Yossi said. “You now have, for the first time, people trying to figure out: How do you distribute, how do you govern and how do you own virtual real estate that could represent something in the physical world?”

Is Metaversal Building a New Industry Within Entertainment?

Metaversal’s work includes a collaboration with the producers of “The Hunger Games.” The team approached Metaversal with an idea to reimagine how a storyteller produces IP (Intellectual Property).

The traditional Hollywood approach? A story is pitched to a studio, and the studio funds it, owns it and gets about 90% of the returns. The new concept flips that around by first building an audience for the story, and even creating together with that community.

The first project being built by Metaversal together with the studio is Megarunner, which is about a universe where the currency of power is speed. It will first come out as a comic book, which doubles as an “access pass” to the universe. The intention is to eventually turn the story into a movie featuring the characters that people own within the universe.

“We think this is a really interesting way to tell stories. And why do we take it on as a project? Because if it’s successful, there’s an entirely new industry that’s going to be built out of collaborative storytelling, moviemaking and production.” 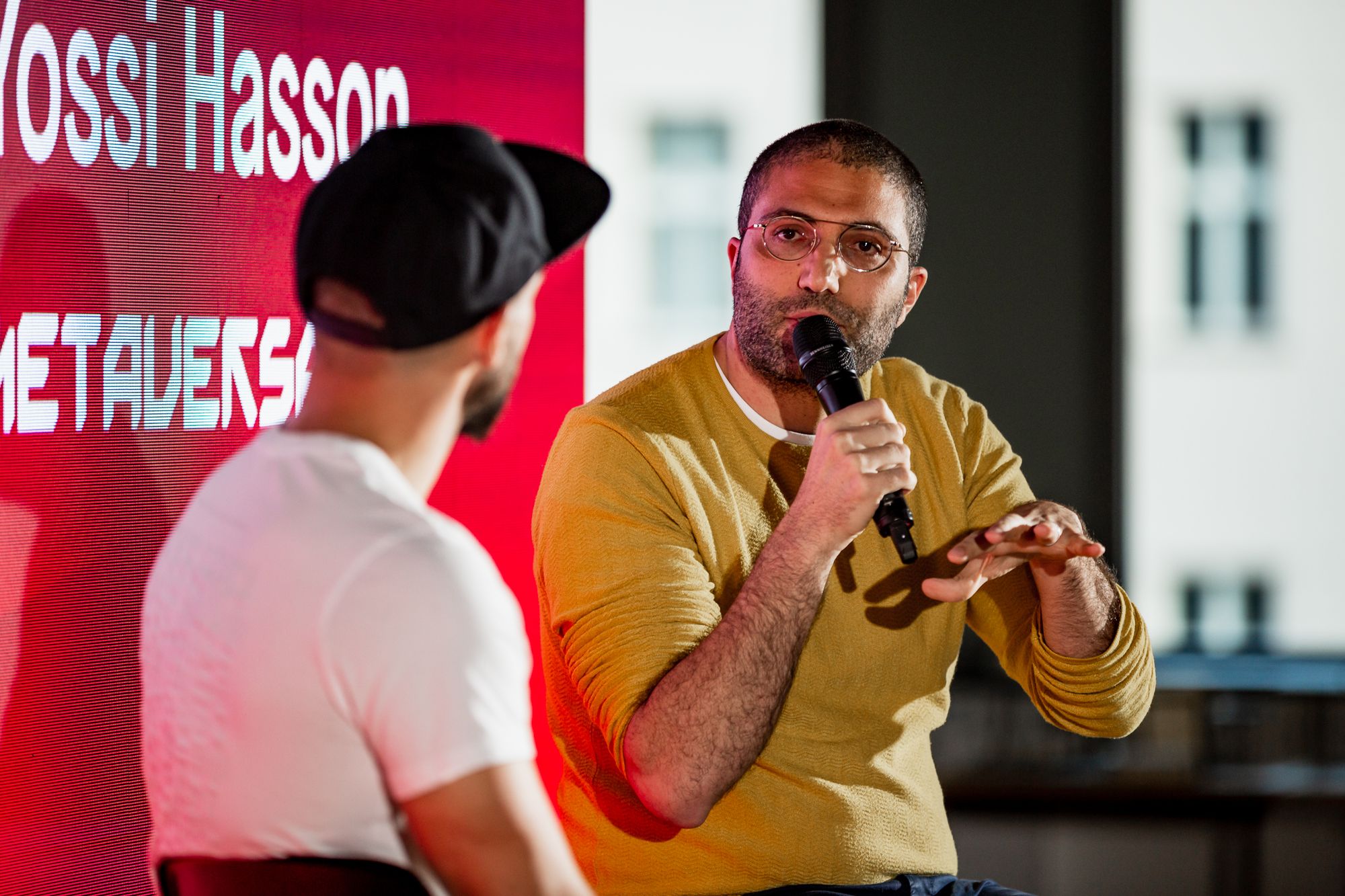 The DAO (Decentralized Autonomous Organization) is a way for people to be able to vote on decisions within an organization. That decision-making capability is represented by a token. Yossi brought up two notable DAOs under Metaversal’s wing: StoryDAO and MetaLettersDAO.

MetaLettersDAO acts as an invitation to anyone to design a letter that will be released under an open-source license. Whoever designs a letter joins the DAO, which supports emerging artists and developers in learning about web3 and helps showcase them within the industry.

“It’s a way to try and bring in more people into our community and into the world of web3 in an open and transparent way,” Yossi explained.

Yossi Addresses Meta: ‘Fool Me Once, Shame on You…’

“We believe in an open metaverse, coming from our background in open-source software,” said Yossi. He does not believe that companies like Meta and Epic Games — which has raised billions to build the metaverse — have the same goal in mind.

“We think that’s just the current system trying to replicate the current system, and are not in support of a closed metaverse,” Yossi said, adding, “If you look at the DNA of a company like Facebook, its genesis is about getting information about you and selling advertising to you.”

Yossi stated that what Meta has done to lose people’s trust will not be forgotten, especially as the company enters a new frontier which will include everyone’s assets and information.

“I think most people are going to say, No, thank you. I’d rather go with a more open, trustworthy approach where I control my data, where the community’s building that experience, where individual creators are being rewarded for building those experiences and not being taxed — what Meta’s trying to do, charging 47.5% for every transaction on the platform.”

If you ask Yossi, that’s exactly why Meta has spent billions on rebranding. “We’re not stupid. Fool me once, shame on you. Fool me twice, shame on me.”

Is Web3 the Biggest Movement of Our Lifetime?

Yossi would say so. Lucky for those just joining the party, he thinks we’re still in the early stages of this journey, and of a new asset class being born.

Citing past stepping stones like the printing press, radio, TV and the internet, all of which changed how we learned about the world, Yossi said this is simply the next wave.

“If you follow where culture goes, that’s where value goes. And if this is the technology that is storing culture, showcasing culture, allowing you to both invest in culture and potentially trade it, but also experience it… then this is where the industry is going to be spending all of its time. And it’s going to be the new emerging platform.” 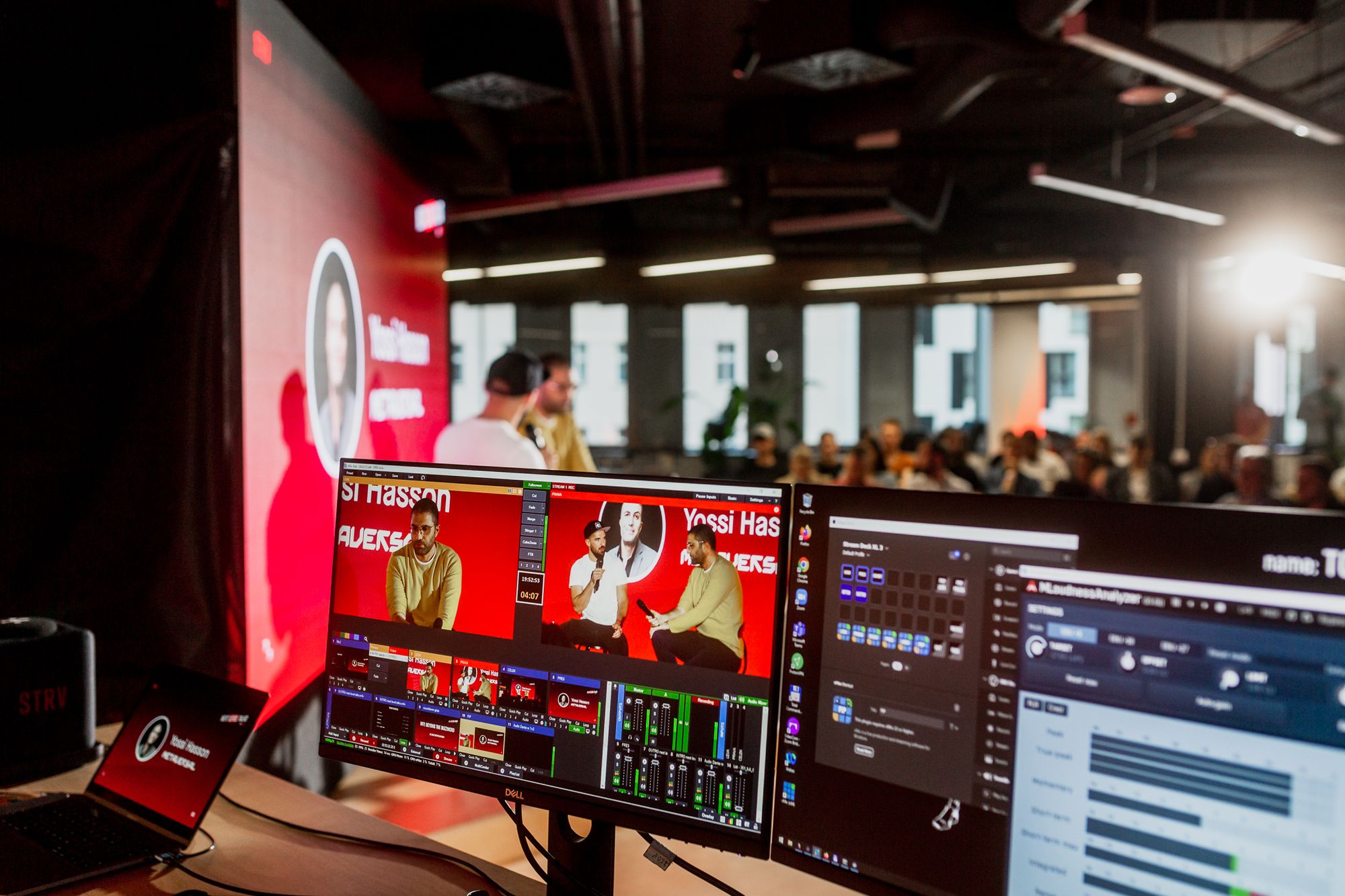 If You Want to Understand Web3, Just Walk Right In

Yossi’s advice is to just go through the “pain and confusion” of buying your first NFT. But if you need a bit more guidance, there are resources available.

“There’s a cool platform called RabbitHole.gg, which is a cool site that tries to take you through the process of different elements of the web3 world and rewards you for doing so.”

Of course, Yossi also admitted that anyone can fall victim to situations like buying into non-existent projects — something he’s gone through himself. But those experiences create the necessary knowledge. So go in with caution, just be ready to fail here and there.

And as a final rule of thumb when discovering the world of Discords and beyond, Yossi said: “Go deep instead of wide.” If you like a project, buy something, join the Discord, meet the people, be a part of the conversations. Spend time in that community and contribute. Take the time to actually slow down in an industry that’s speeding up.

According to Yossi, this is a “10-year bit.” So if you get overwhelmed with the constant changes in the NFT market, a good way to cope is to take it easy.

“Try not to look too much, which means no more than twice a day,” he said with a laugh. As for that 10-year mark, “We think there will be a number of ways to allow broader audiences to participate in those iconic NFT pieces.”

To Yossi, that may mean a variety of things. Fractionalizing and allowing others to own a smaller stake, lending the NFT or borrowing against it and putting it into yield protocols in the DeFi world… multiple ways of potentially monetizing this collection.

As for companies, he’s convinced they’ll be a thing of the past. We’ll have protocols that may be powered by the DAO, but it will be the ethereums and token networks of the world that will be programming us, as opposed to the other way around. But before all that, we need to focus on the tools that will make web3 simpler right now.

“So if you are working on that, please come talk to me. I’d love to invest.” 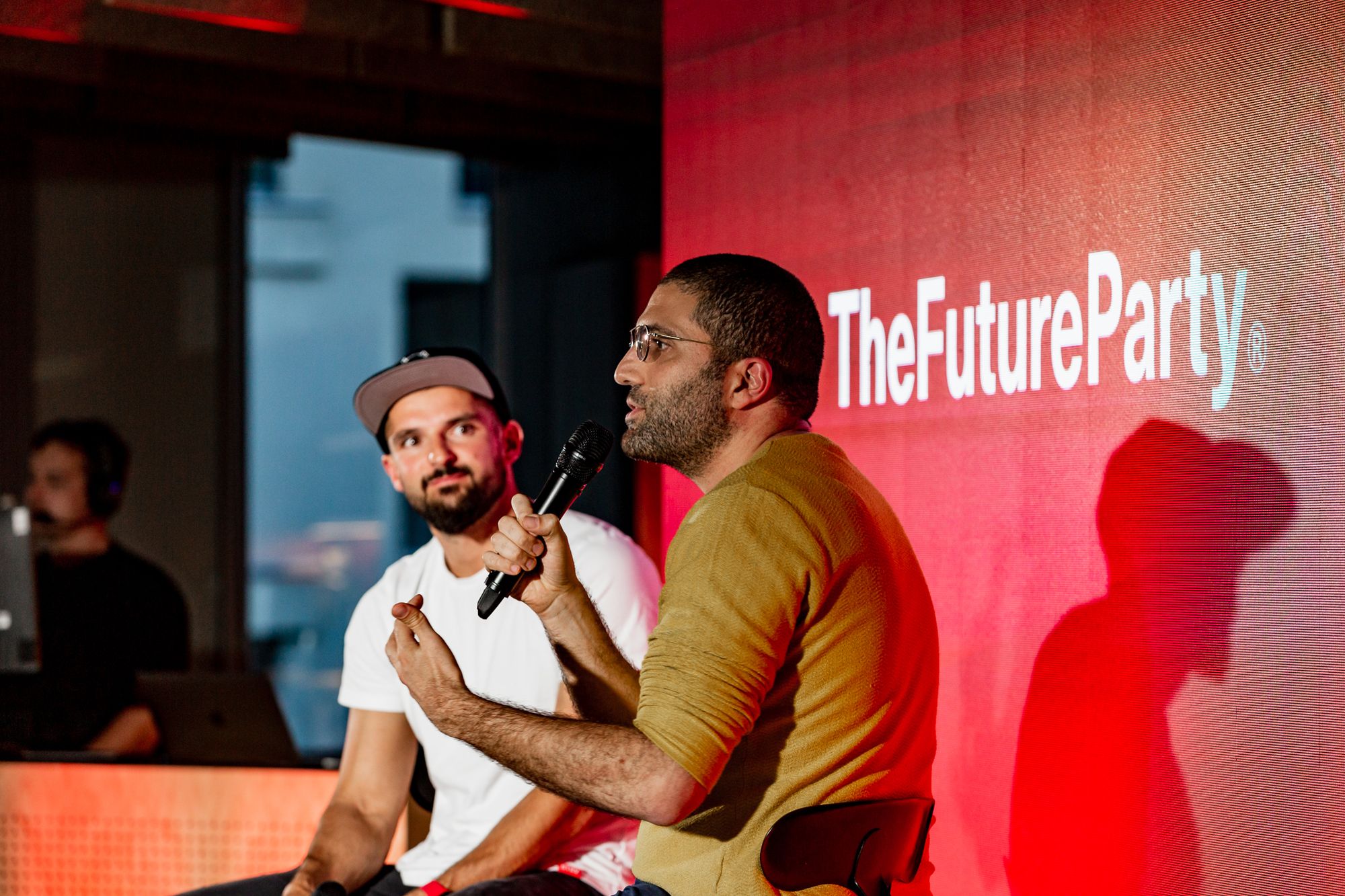 TheFutureParty Asks: How Do You Convince a Big Studio That NFTs Matter?

Question in full: What advice would you give to someone working in the entertainment industry in a big studio and is trying to convince their bosses that NFTs are a thing, but they don’t listen?

Yossi jokingly suggested, “Leave the company, come and talk to us and let’s build something together, because you seem much smarter than your boss and you’re on the cusp of culture.”

And if that’s not an option, he’s got another idea.

“Find a community that is in that space that you can partner with. There are a number of different Hollywood brands or people that are entering the space. I mentioned StoryDAO as one of the projects that’s bringing in people all the time. There’s another one called Jenkins the Valet, where anyone who has a Bored Ape can give their Bored Ape to a group of people who are going to now build stories and movies using those characters. You could join the world of Runner that we’re doing…

“There are multiple people in the industry that are looking for great talent who have the experience that you’ve built within Hollywood that want to go out and produce this. Or go and launch your own DAO. And if all else fails, send your boss to me and we’ll have a conversation with him.”

One final thank you to Yossi Hasson and TheFutureParty. Stay tuned for the Scavenger Land wrap-up!