Football (soccer) fans, may we have your attention please.

If you haven’t heard of or experienced Live Penalty, let us explain. The core of the project is a customized football launching machine that can be controlled by multiple players through their phones, letting you score goals against real goalkeepers, with a real ball, in a real stadium. But, from your living room (or wherever you find yourself). It’s virtual, yet tangible. It’s awesome.

In 2018, STRV became a partner on this project. It was an undertaking that could hardly have been feasible a decade ago. Joining the founder, Pavel Kacerle, and his team, we invested time and resources into making this idea come alive. Now, after being chosen for the leAD 2019 accelerator (supported by Adidas) and following successful beta testing and a media-covered live stream, we’re proud to present the outcome of outstanding teamwork and fearless execution.

Using the newest technology, Live Penalty translates a player’s mobile command into real-life action within a revolutionary 0.5 seconds. Players play to win, and are gradually eliminated based on a point system. No virtual goggles needed. Just turn up the sound, watch your screen—and you’re there.

Live the game. Experience the roaring energy of a world-renowned stadium. Play against real football heroes. Or play against someone you kind of want to kick a ball at.

With behind-the-scenes input from Live Penalty CEO Pavel Kacerle and our STRV Product Manager on the project, Jakub Vodak, we decided to dive into just how this idea was born, why we decided to partner up and what’s got big brands looking to collaborate. 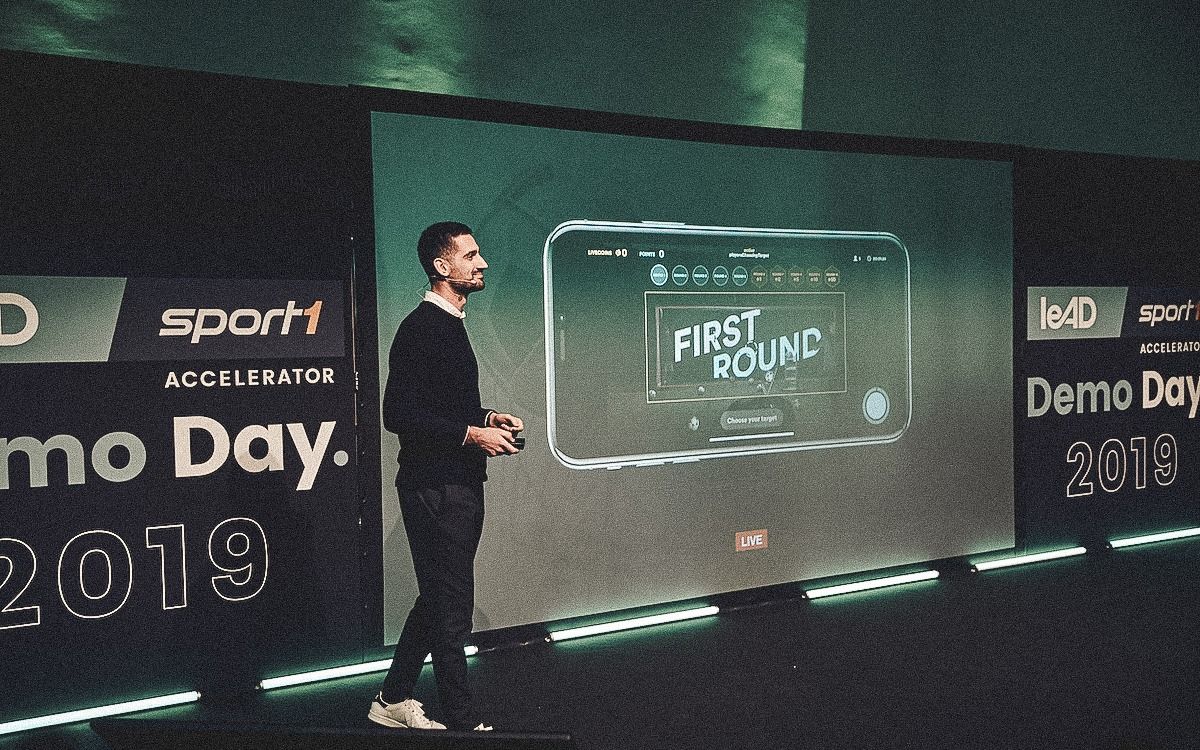 THE ORIGIN STORY: FROM MARKETING IDEA TO GOING ALL IN

Fresh off a project for Marvel, Pavel was working for Nivea as a stereoscopy supervisor when the idea to shoot real footballs at real goalies via social media started taking shape. As one of the biggest sponsors of clubs like Real Madrid, Liverpool, AC Milan and PSG, Nivea is heavily linked with the football industry. And Pavel saw potential not only within that industry, but with his new connections.

“The first variation of this idea to have multiple players on social media commenting emojis that represented parts of the goal—like top right, center left and so on—and we’d randomly choose a winner, who would then get the chance to shoot one-on-one against the live goalkeeper,” Pavel said. “This would allow Nivea, in combination with one of their clubs, to give away products to the fans.”

But this proved to come with challenges that were very difficult to overcome for little reward, especially due to the utilization of social media and Facebook’s ever-changing platform.

“That’s when we realized that we needed to move everything into our own mobile app development, enabling more features which would have otherwise been limited by social media,” added Pavel. 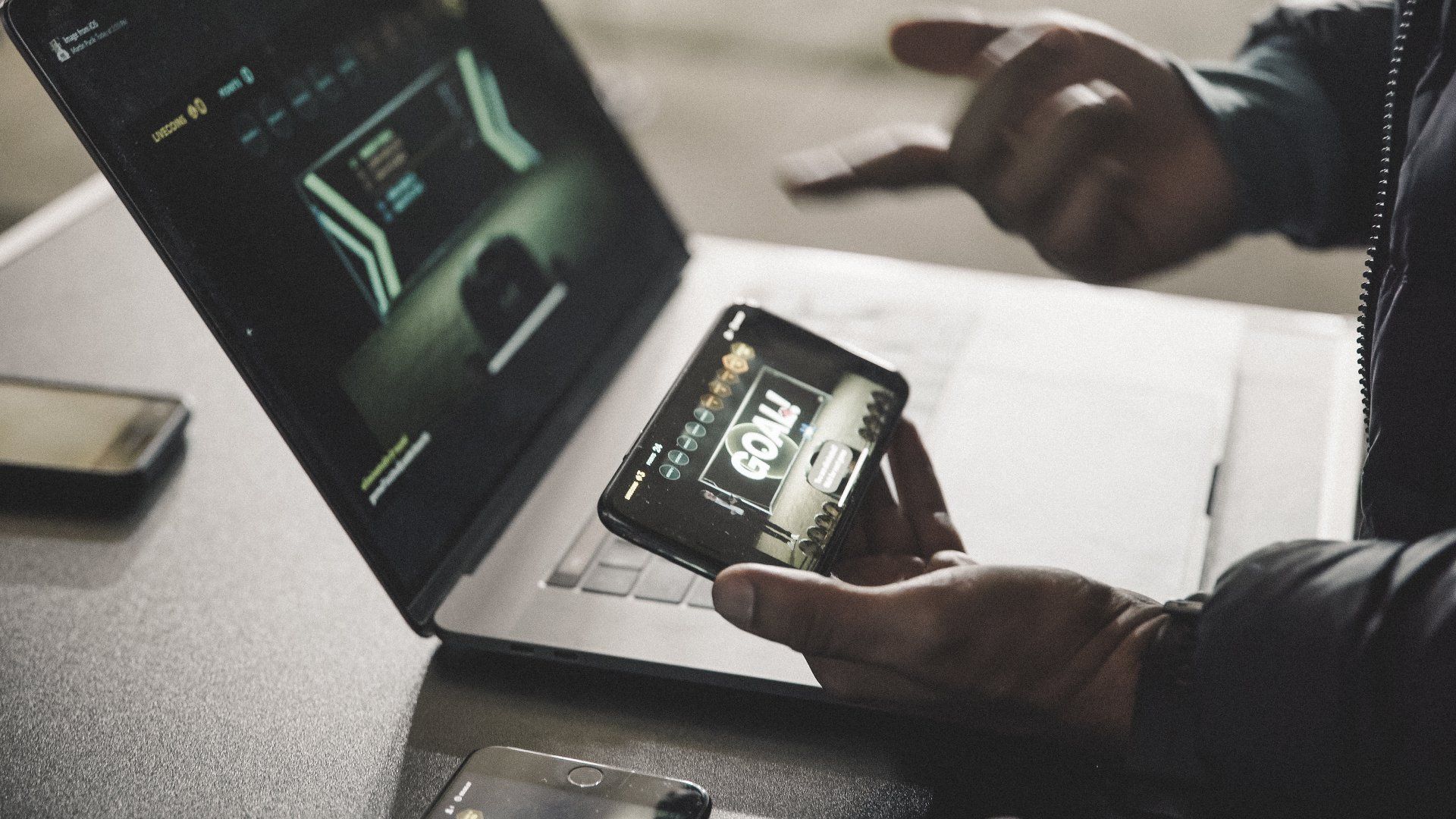 STRV doesn’t throw around the word “brave” just for kicks. Our restless curiosity comes into play not just when we’re already working out a project’s detail, but when we come across an idea that excites us before we’re a part of it. Live Penalty felt big, it felt brave, and it was right up our alley.

When we asked Jakub if it was a swift done deal, he explained, “Our CEO Lubo spoke with Live Penalty’s team a number of times after. There were a few uncertainties about how to do some things—like how to get the live stream latency (the amount of time it takes for a single frame of video to transfer from the camera to the display) super low—but he grew very interested in the project and saw real potential.”

One of the main issues was tackled almost immediately. Lubo felt that more research was needed before moving ahead, so STRV found a service that could guarantee latency below two seconds—which is a very difficult feat. After that, the STRV team on the project began expanding. 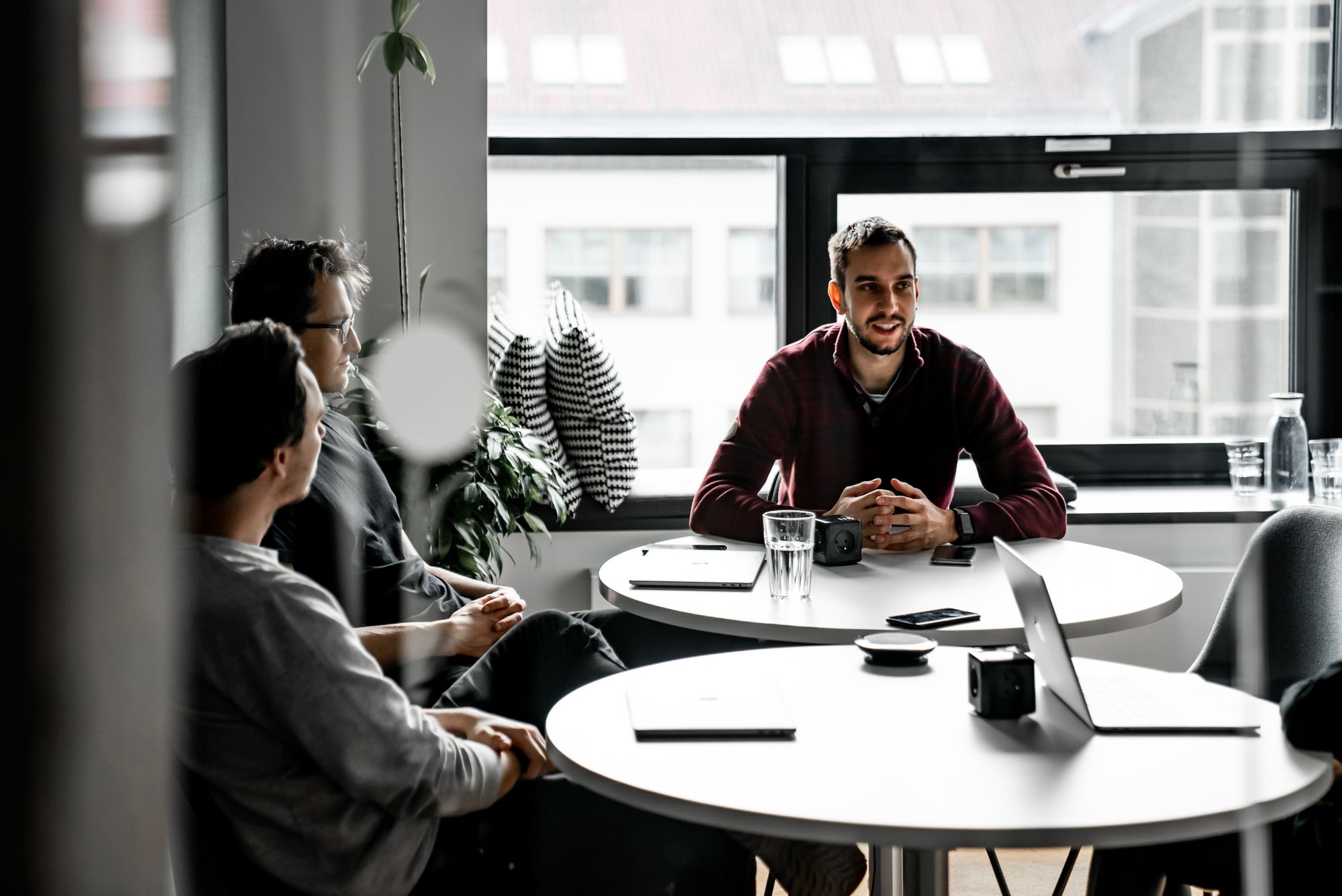 Jakub was one of the first to officially join the project’s official team.

“I came onto the project as product manager in spring 2019, when Live Penalty had a prototype and were interested in iOS and Android mobile apps,” said Jakub. “We started working on product specifications, discussing the technologies, building a gameplan. Gradually, we began pulling in our engineers, who helped figure out the database structure and how the Live Penalty game could be stored within. That’s what got the project going from our end.”

On average, the STRV team onboarded one engineer every two weeks to ensure smooth transitions. To set up proper communication between everyone on the project, the team implemented weekly sprints that ensured everyone was always up-to-date. From the beginning onward, they utilized Jira task management to remain organized and stuck to weekly syncs. This gave everyone space to express any concerns and celebrate victories.

“There are now 13 of us from STRV on the project, and setting up communication amongst us and the Live Penalty team is crucial,” added Jakub. “To cover all details, we sometimes go over things over the course of multiple meetings, especially because the Live Penalty team does not have much experience with building products for mobile. The best way to reach an understanding in this case is by making everyone a part of the process.”

In fact, as of a few months ago, the Live Penalty team has spent a lot of time working from STRV’s Prague office. So although we differentiate between teams for the purpose of this article, it really is one big team working together towards one goal: getting Live Penalty to its full potential. 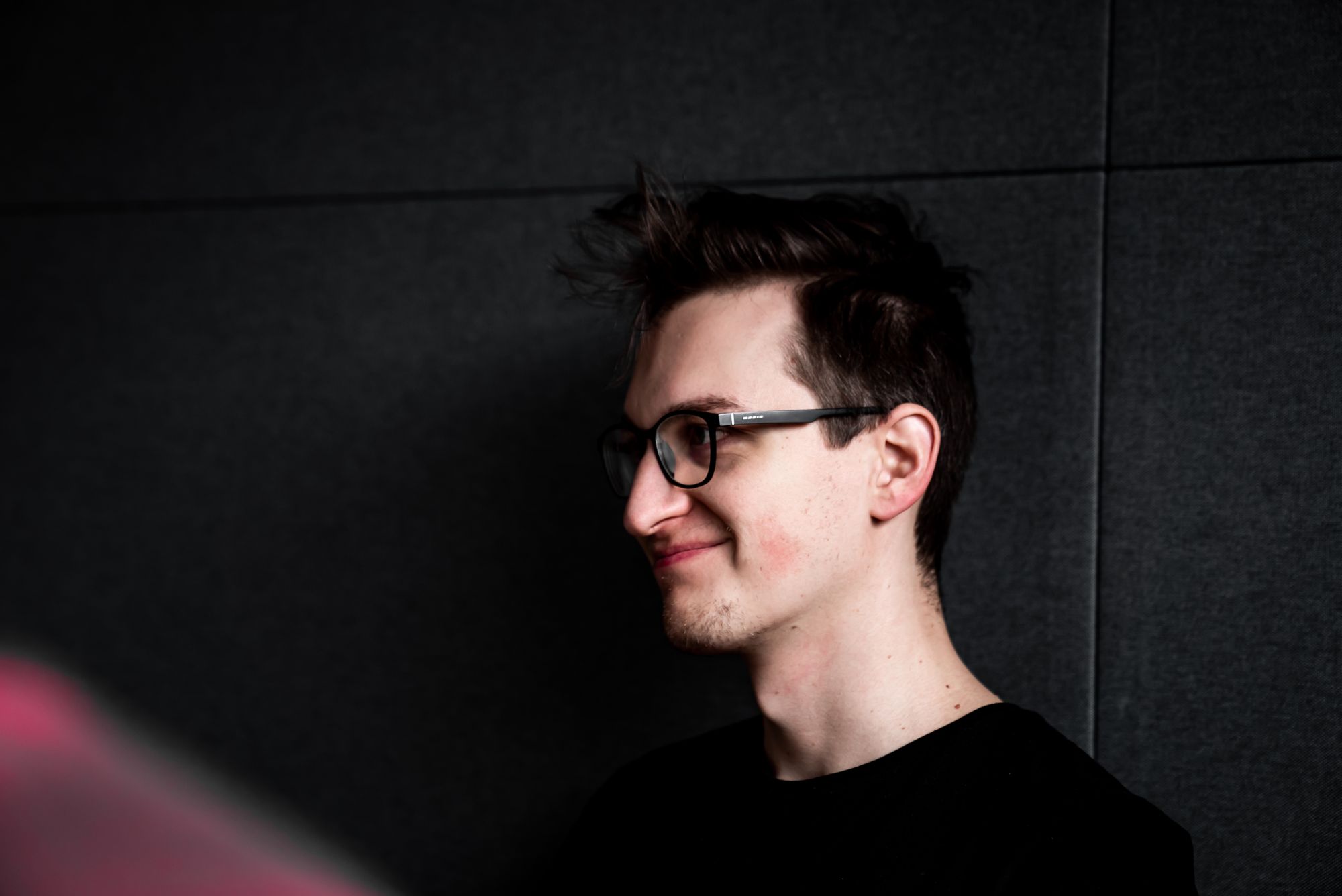 With uncharted territory comes the necessity to consider new angles. First came building a customized football launcher and a highly automated stage. Eventually, a chain of improvements gave players the ability to influence the launcher with a combination of accuracy and speed, getting the game as close to the real thing as possible.

In terms of engineering, the team had to figure out how to let thousands of players play by controlling a single football machine live at the same time, while ensuring seamless communication between multiple online devices in real time.

Development required close examination of aspects that needed to be handled with great care—like perfecting the database that pushes data from server to client with practically no delay; handling the administration part of the app (for instance, a part of the app is dedicated to the moderator, allowing him/her to see all information about the game, and another part is for the referee); and perfecting every pixel of the LED panel behind the goal, which is a crucial part of the experience because it displays dynamic game animations and information.

The complex nature of the game is in-line with the complexities of any sport—there are rules to follow, but it’s a thrill to play and watch when you know them. But it does present another challenge: explaining how the elimination-based game and its point system actually work. Making this as clear and easy as possible is one of Live Penalty’s priorities, and a huge thank you goes to all Beta testers who provide feedback. (You can become one of them here!)

HITTING THE NEXT LEVEL

Connecting the digital with the real world is revolutionizing innumerable industries, and sports are no exception. In 2019, Live Penalty applied to tech accelerator program leAD and was chosen out of 340 startups to take part. The program is a joint venture between SPORT1—the top live sports platform in Germany—and leAD, which boosts sports tech startups from seed to fully functioning profitable ventures.

After joining the leAD sports accelerator in September, the Live Penalty team spent about 12 weeks there. That has resulted in a lot of contacts in the sports industry, lots of connections, and Live Penalty as a partner is being considered by a number of big brands.

When asked about current and future goals, Pavel explained, “We’re focusing on more than the typical football markets, such as South America or Europe. Our efforts are also oriented towards Africa or Asia, where we see immense potential for growth—especially amongst esports players.”

As Live Penalty goes through regular live beta sessions, which have been going on every week since November, the plan is clear and on track: Once the iOS app hits the Apple App store at the end of January, followed by Android mid-February, Live Penalty can start regular broadcasting. Through connections with local influencers, the enthusiastic followers of this project can expect the game to be ready for big events with clubs like Manchester City and the European Football Championship, UEFA Euro 2020.

Want to know even more about this project? Or do you think STRV might be the right partner to propel your idea forward?