As we enter the “messy middle” era, the tech market continues to recover from its nightmarish summer and tsunami of layoffs. October saw 30% more funding than last month, although the average deal size still leaves something to be desired.

O Canada, how do you do it? The country’s growth is stealing headlines, as is biotech with its consistent traction. Meta’s own team isn’t feeling Zuck’s vision, Apple is hitting Spotify with a “you shall not pass” and an army of verified Elon Musks is getting on the Chief Twit’s last nerve.

Below are the month’s most notable news and numbers, including year-on-year (YoY) and month-to-month comparisons as well as leading industries and companies worthy of attention. 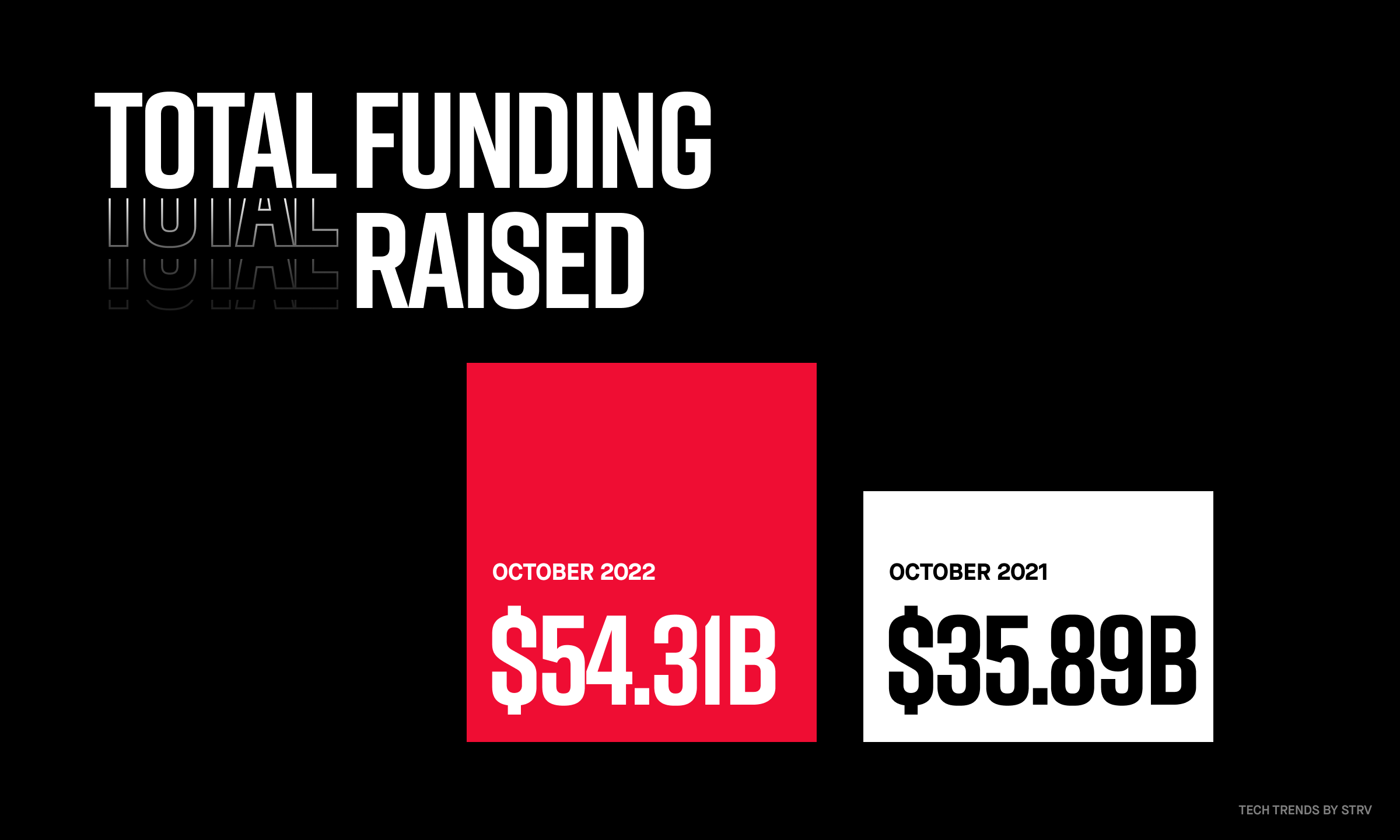 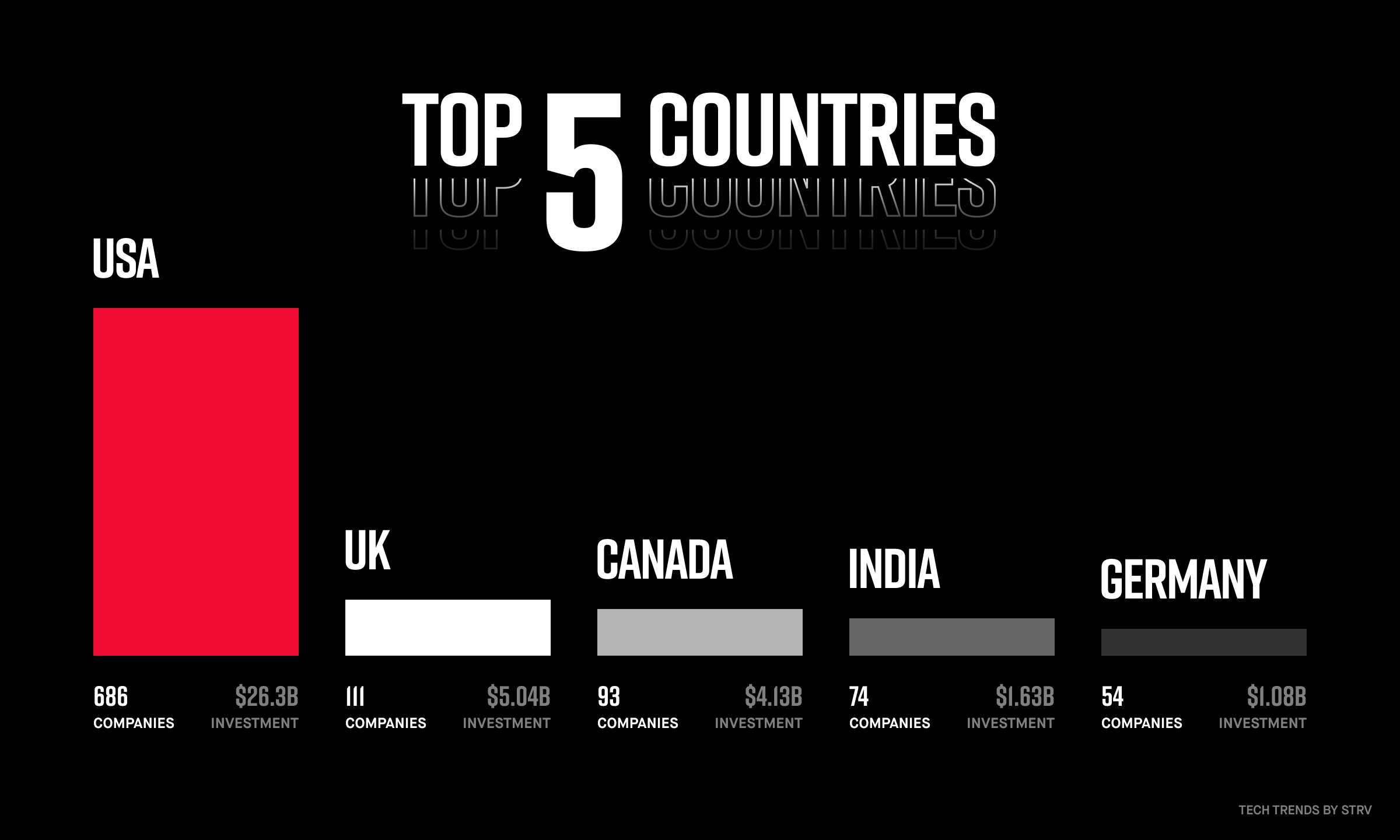 Conclusion: October saw significantly more funding than the same period in ‘21 and 30% more than September. However, the average deal size shrank — meaning that individual companies received smaller investments. All of the top-performing countries scored more than $1 billion in funding (after a long time), with Canada's explosive growth being the highlight. 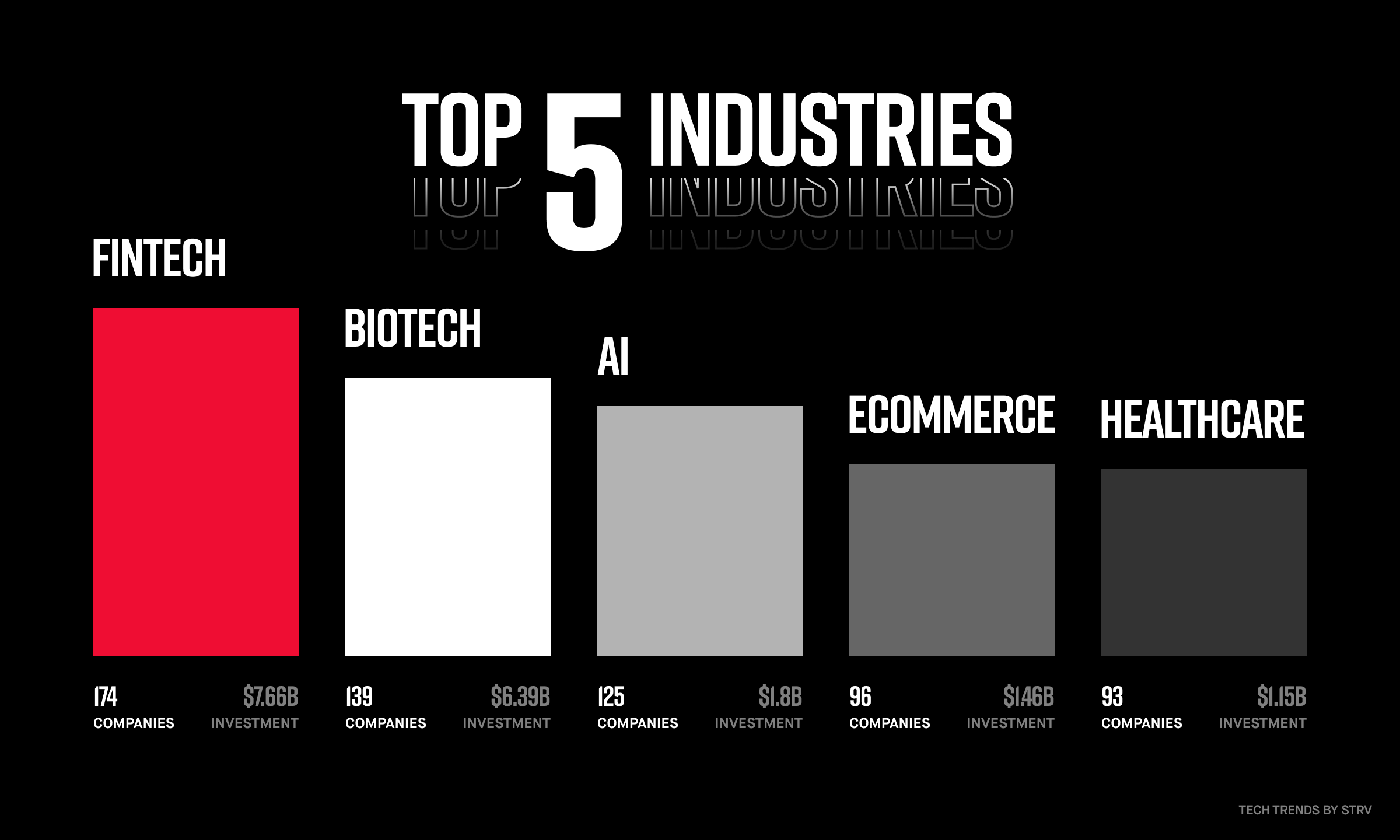 Conclusion: As the long-reigning fintech industry shows signs of stagnation — along with other industries’ investment numbers fading — biotech continues to be the only space with consistent traction.

If last year was the biggest rager the tech scene had ever seen, then this year is the savage hangover making us second-guess all the cannonballs into pools of cash.

VC funding in Q3 totaled $81 billion. That’s down 52% YoY and 33% quarter-over-quarter. The managing partner and founder of Contrary Capital said we’re entering a “messy middle” era as “companies can no longer raise $5—10 million seed rounds with nothing but a deck and the assumption that revenue multiples will skyrocket beyond historical norms.”

The number of layoffs in October has more than doubled compared to the previous month, and that’s just one of the tech industry’s problems. A number of quarterly earnings reports prove that even Silicon Valley greats are feeling the burn of soaring interest rates and inflation.

But wait! A glimmer of hope and a dash of good news (for a select few).

Meta has also unveiled its Q3 results but this story deserves its own section because boy oh boy, is there a lot going on.

Meta stock plunged 25% to its lowest point since 2016 after uninspiring Q3 earnings numbers outlined losses from its $3.67 billion (over $9 billion this year) investment into AR and VR tech. The company is now valued at ~$265 billion, down from $1+ trillion in 2021.

So what’s behind Meta’s lack of success on the metaverse front? Well…

Gloomy news or not, innovation continues. Meta has a new feature called Make-A-Video that enables users to make videos out of text prompts, which now makes the company a rival not only to TikTok but also to DALL-E.

Maybe we’re just not seeing the big picture here. Perhaps Zuck is way ahead of us in his grand vision to rather be early than fashionably late. Meta announced the Meta Quest Pro, a mixed-reality headset that retails at $1,499 (compared to $399 for the inferior Meta Quest 2). Fair enough — since the worldwide market for AR/VR headsets grew by 92.1% YoY in 2021 (with 11.2 million units shipped) and the VR devices market is predicted to hit $13.28 billion by 2026.

Will all of this plus the recent announcements about virtual legs, an Iron Man VR game, integration with Microsoft work apps and a partnership with ‘The Office’ prove the haters wrong?

At last. The resolution to an epic 10-month saga is here. Elon’s acquisition of Twitter for $44 billion makes it one of the largest tech deals in history, right behind Microsoft’s acquisition of Activision Blizzard for $68.7 billion and Dell’s acquisition of EMC for $67 billion.

In those 10 months, we’ve witnessed a dramatic series of court hearings, fraud accusations, rumors and whistleblowing, all mainly related to Musk’s doubts about the validity of Twitter’s user base — a.k.a. the guessing game of “spam, bot or regular Joe?”

Even before the purchase, internal documents showed Musk’s plans to cut Twitter’s workforce by 75%. Elon claimed the info was false — yet eventually pulled the plug on roughly 50% of 7,500 people “to place Twitter on a healthy path.” At one point, Twitter’s transition team told staff they would receive an email about whether they still had a job.

But lo and behold, Twitter is now reaching out to dozens of fired employees and asking them to return. Turns out, some were laid off by mistake and are crucial to bringing new features to life.

The turmoil has made advertisers pull back from the platform, worried that Musk’s reign would trigger a boost of hate speech and misinformation. The Volkswagen Group recommended that its auto brands — including Audi, Lamborghini, Bentley and Porsche — pause their spending on Twitter, fearing that their ads may appear alongside problematic content. The marketing teams of Danish brewing business Carlsberg Group were instructed to do the same.

So far, the most noteworthy idea from Musk has been Twitter Blue — a monthly subscription giving the most engaged users access to premium features. It was supposed to be $20 a month, but it’s now $8. Guess when Stephen King complains, you listen.

Our opinion? The chaos can either be great for Twitter (particularly in monetary terms) or kill it entirely. And when we say chaos, we also mean the multitude of verified Elon Musks popping up, providing sage advice like “if you want to be like me, drink your own pee” — and then being suspended. Seems like not all Twitter innovations are going as planned.

To end on a wholesome(ish) note, Musk has also hinted at a Vine revival. For you kids out there, Vine was essentially TikTok back in the day. And it looks like the Vine fan base is alive and well, with 69.4% of the 2.8 million people voting in Musk’s poll supporting a Vine comeback.

The More You Know

To keep you entirely caught up, a few highlights worthy of attention:

($150M in latest funding) Bilt Rewards offers a credit card and loyalty program where customers can earn points on any rent payments made with the Bilt Mastercard. These points can then be used to help cover a downpayment or to book travel with select airlines and hotels, among other things. The funding will help build additional tools, strengthen relationships with existing loyalty and real estate partners and expand the Bilt Rewards platform across the US.

($26M in latest funding) Katalyst is a wearable health tech company that brings EMS (Electro Muscle Stimulation)-specific training to an at-home format and delivers a two-hour workout in 20 minutes, directly activating up to 90% of muscle fibers. The company intends to use the funds to scale production, develop the brand and grow the team.

($12.3M in latest funding) Zerion is a smart web3 wallet and investing tool that enables anyone with a mobile phone to manage their DeFi and NFT portfolios. The funding will be used to build out a Zerion product that aims to streamline cross-chain identity — to ultimately challenge the dominance of the “go-to web3 wallet” MetaMask.

($6.2M in latest funding) Fintor is a platform for buying and selling fractional equity shares in real estate properties. Users can buy and sell the shares of an investment property, similar to how assets are traded on the public markets. The funding will further allow the company to continue growing its user base while expanding its number of investment properties.

($1M in latest funding) Agapé is an app for strengthening romantic relationships through personalized daily questions. The scientifically-designed platform is an S21 Y Combinator alumnus that is now #17 in the Health & Fitness category in the US App Store. The funding intentions haven’t been publicly disclosed.