The goal of The FA App is to unite and empower the Friedreich's Ataxia community, allowing FAers to participate in finding a cure by enabling novel forms of research. It is structurally (and permanently) not-for-profit. And it remains one of the most meaningful projects STRV has built.

Friedreich’s Ataxia (FA) is a debilitating neuromuscular disorder affecting roughly 15,000 people. The FA App project was spearheaded by EndFA working closely with FARA (the Friedreich’s Ataxia Research Alliance), which has been pursuing treatments and a cure for over two decades. This app’s overarching goal is to help in the search.

We’d like to share some details about the Discovery Phase of this project, which began when we joined forces with EndFA to design and build the FA App.

The Discovery Phase was largely about trying to understand the FA community through focus groups and interviews. These initial weeks allowed us to create a product that has since become a fundamental tool for FA researchers, advocacy organizations, clinicians, and individuals and families living with FA.

We spoke to Katerina Douskova (Chief of STRV Labs and former Chief Product Officer), who was the project’s product manager during Discovery. Kate was kind enough to share her experience with getting to know the community and crafting the FA App, as well as how it continues to evolve today. 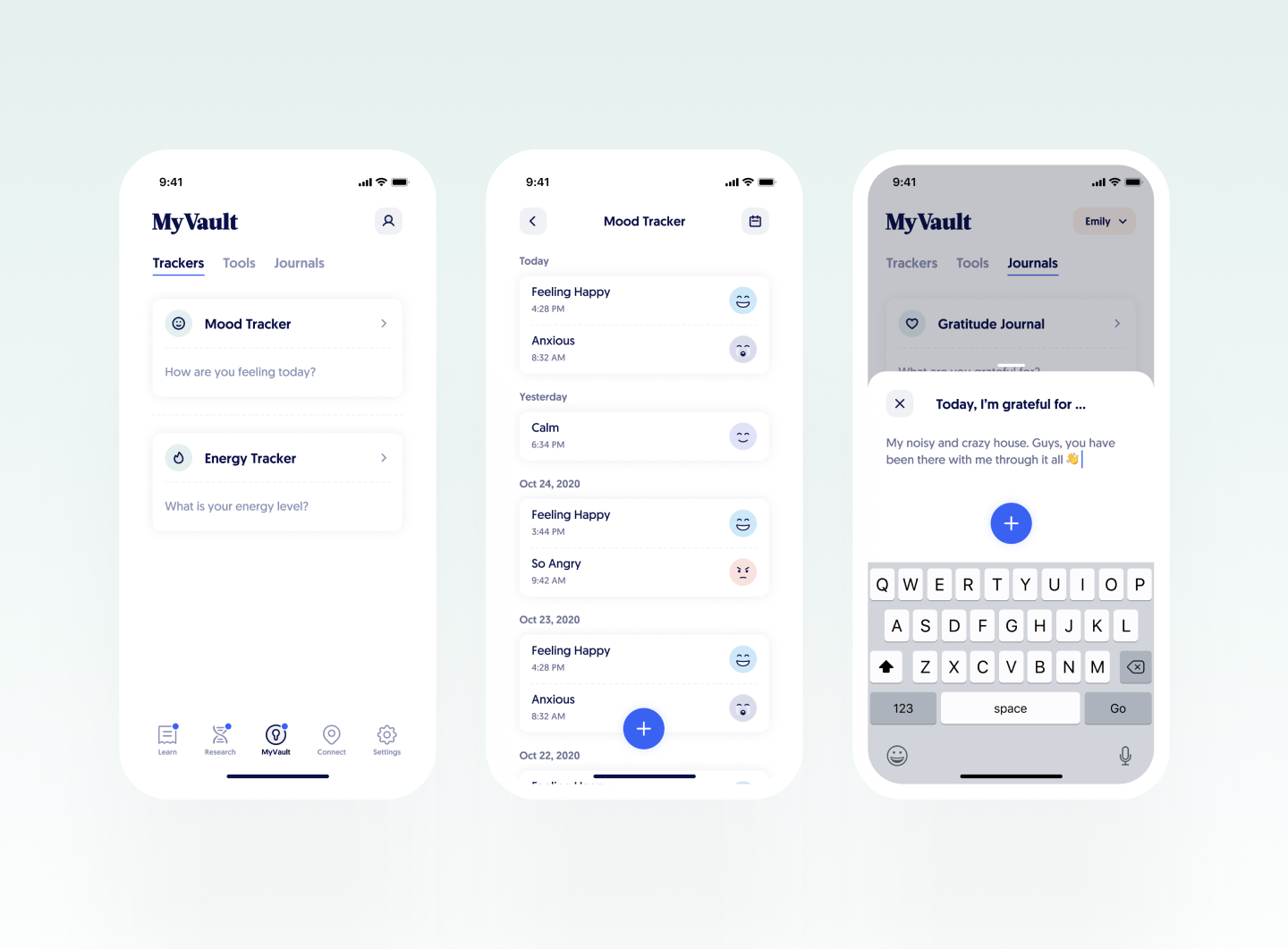 Before we get into the details of Discovery, can you tell us who took part in this phase from the STRV side?

We had the standard product manager (PM) and designer on the job. What was unusual was that, due to the number of users that we would be targeting and talking to, we had two PMs — just to make sure that collecting all the data wouldn’t take months.

We also involved our technical leads because we wanted to make sure that, from the technical standpoint, we’d be able to develop everything needed — specifically the many security and privacy features and, as we'll discuss later, a lot of accessibility features. We wanted to make sure that when we made promises to the FA community, we weren't lying.

Can you tell us about the Discovery Phase and how it was adjusted to suit the FA App needs?

The Discovery process started out as usual. We had our main point of contact on the client side who then connected us to other subject matter experts. That introduced us to the community and the problem they were trying to solve. At this stage, we gathered and read as much information as possible to understand the community and the gap that the app was meant to fill.

The second part was interacting with the users through focus groups and interviews. Traditional focus groups are: You get everyone in one room, show them a few screens, get their thoughts. You also create personas and search for commonality. With the FA app, we had calls with people from 10–12 different countries at a time, all unified by this community yet looking at things from various angles — not just culturally but because of the many different needs. And the user personas created themselves.

The third part was when the designer came in. We not only started designing the user flows and wireframes — which is standard for Discovery — but also started thinking about accessibility. Normally, we first focus on features and how to attract users, and accessibility comes after. This project required a shift. Accessibility in the first place, then figuring out how we can build features into it.

The last part was sitting down with our engineers and figuring out how to bring it all together. Mapping everything out was complex due to the amount of information, and it wasn't like we could look at any competitors. And even if we could, we didn’t want to compare ourselves. We wanted to create something specifically for this community, to get it right. 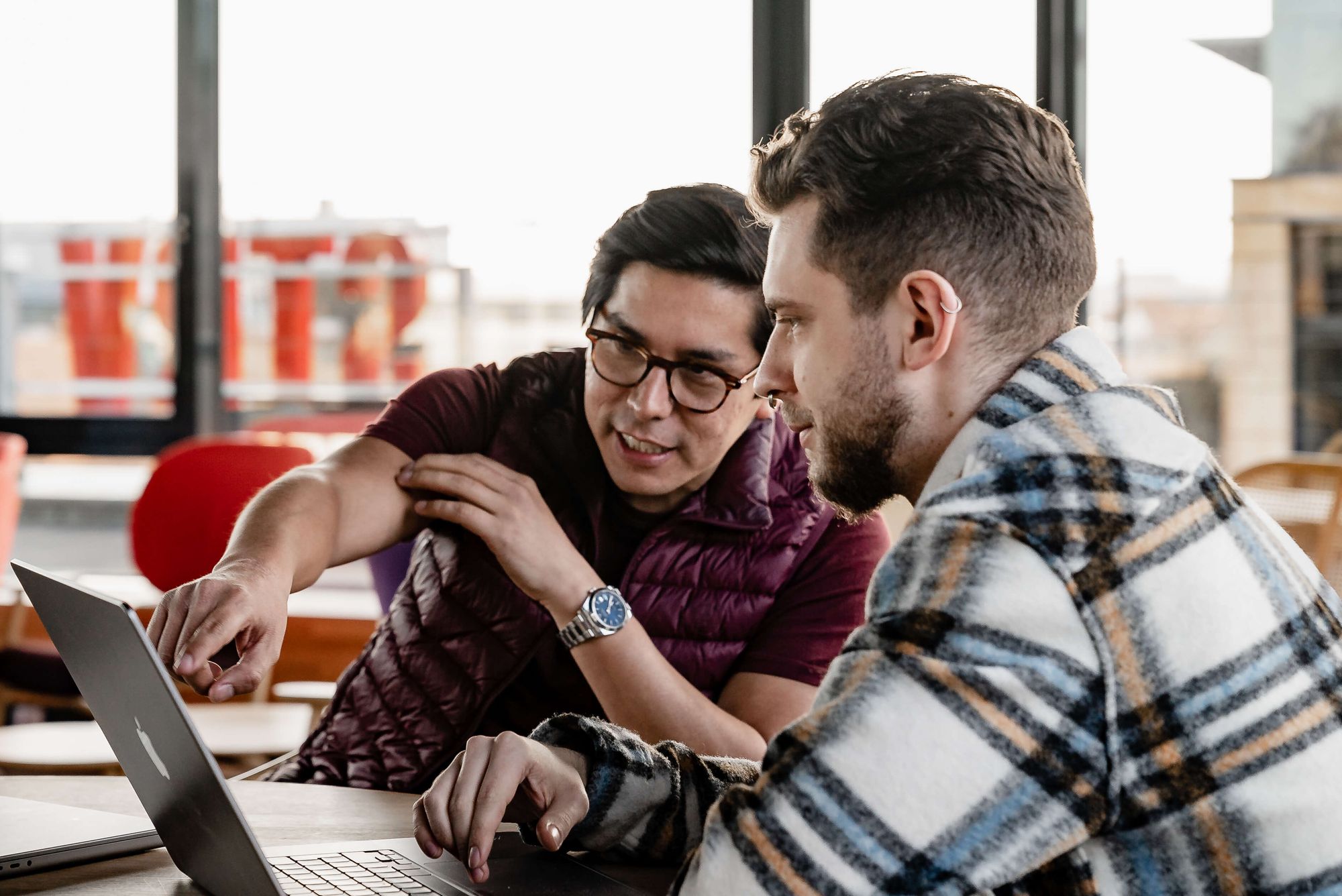 When and how did you know that such an extensive Discovery was a must-have?

We knew we were venturing into a space that we weren’t 100% comfortable with — not in terms of development, but because we’d be talking to people about very personal, private things.

The FA App’s user base is very unique. When we launch a traditional app, we usually ask, “Who's our primary user?” And that's who we target from the start. Then, as development goes on, we begin targeting other groups.

With this project, it wasn’t one user base. To generalize, it was three. We needed to target the primary user base — patients who have FA (called FAers) — but also that community around them, which includes two user bases: The friends, family and people who support FAers, as well as physicians, doctors and researchers.

Regarding the FAers, for us to be able to create a safe space where they would share things with us, it just made sense that we just prolonged the Discovery to make sure that we were able to hear all of their perspectives. It was also imperative that we talk to all three of the user bases mentioned, to ensure all of them had the pieces they needed straight from the initial launch.

Unlike most apps, we couldn’t launch and then, a month later, add another feature that would attract another set of users. Here, we needed to make sure that the people who have FA and their parents felt comfortable using it from the getgo; and, on the other side, we had to be able to intelligently and efficiently connect with the doctors.

How did learnings from Discovery inform product decisions throughout the project?

In one word, Discovery was eye-opening. When we met with our contacts from EndFA and FAA (Friedrich's Ataxia Accelerator) in the beginning, they provided tons of information that gave us a sense of what we wanted to build. But when you actually sit down with people — it's like when you learn something in theory, and then you actually practice it in real life.

Although I think we were very well-prepared in terms of knowing what this condition does, hearing about the actual struggles firsthand rather than reading about them pivoted us immensely. We realized some things that we considered not as important to have in the initial launch were actually crucial, and vice versa.

I think it also gave us perspective. We realized that we weren’t building a standard app. We were here to try and help people, to connect them… it humanized the whole development process, at least for me. It put a face to this condition, which made it so much more personal. 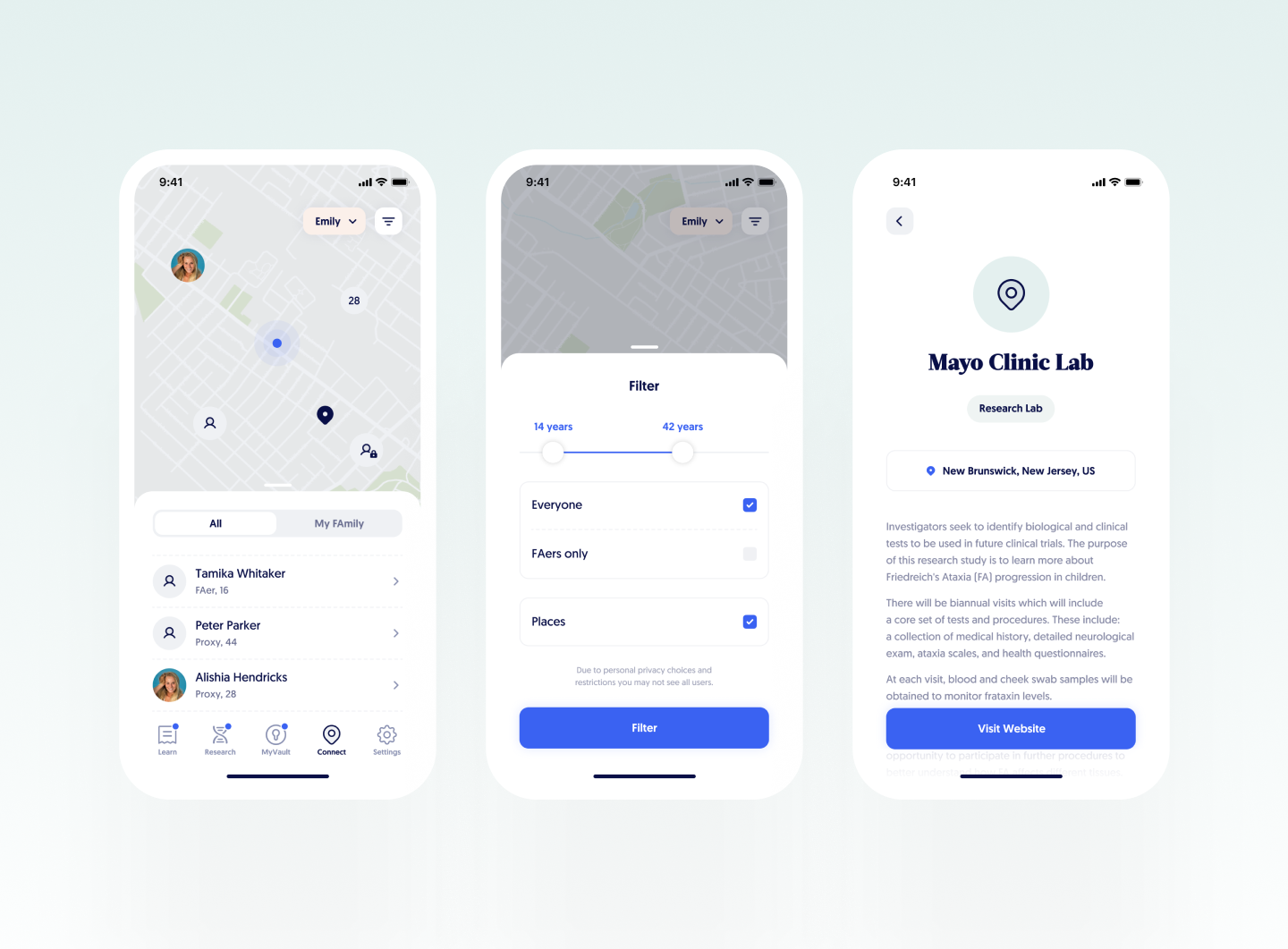 How important was accessibility and did it pose any challenges?

Accessibility was fundamental. Specifically to have multiple designs to avoid scaring recently-diagnosed people while still catering to those further along.

FA affects a lot of muscles and neurological aspects. As the condition progresses, people lose some motor skills — but how they're lost is not the same for everybody. There are certain levels. You can’t know if someone will progress from level 3 to level 5 in a one-year time span or in 10 years, and this was something we took into consideration.

A simple example is: As muscles start to wear out, people begin to shake or lose their motor skills, especially in their hands. The easy fix for an app is, “Let’s make the buttons bigger.” But, at the same time, our biggest challenge was the user base of people who’d only recently been diagnosed. Chances are, their motor skills are still okay.

Our solution was to have different designs for different stages of FA. We didn’t want people to open the app and think, “Oh. This is the inevitable future.” That’s scary. Getting this right was a challenge from both the design and UX perspectives.

What kinds of improvements and further research have we done post-launch?

The initial launch focused largely on community and on collecting the right amount of data. Once we launched, it was all about improving how FAers’ can input their information. For example, if they had a doctor's appointment, what’s the easiest way they can input the information into the app so that the researchers can access it?

Recently, we shared the app with the researchers and asked for feedback. “Are you getting the data you need? Are you going to be doing any new tests?” I'm happy to say that majority of the feedback came down to copy changes and had nothing to do with the app’s functionality. Our efforts really came full circle.

Still, there’s always more to do. Currently, virtual clinical studies are a big focus. We're trying to partner with some third parties to see how we can most easily group that community. And we’re constantly looking for easier ways to connect researchers and to get more data into the app. We’ve also improved social components, which help people build their own network on the app.

How has the FA community reacted to the FA App?

The reaction of the community has been overwhelmingly positive. I won’t lie; I was really nervous about releasing this. Mostly because it's such a personal topic. And to a lot of people, it's their whole world, a reality that they have to live every day. We tried to be as sensitive and professional in developing something with empathy and care. My nerves before the launch came down to, “Is this going to live up to the expectations? Is this going to be everything that they had wished and hoped for?”

Thankfully, the launch went really, really smoothly. The feedback we got from the community was a huge thank you and that it's exactly what was needed — which is just everything we imagined. It’s exactly what you’d hope to hear.