The world of Venture Capital (VC) was no fool in April, giving space for Canada and Europe to shine while continuing to support fintech with all it's got.

The past month saw the return of Canada to the list of top industries, with Germany sticking around largely thanks to Berlin-based startup Delivery Hero’s $1.54 billion in funding. And as it turns out, the metaverse confuses 84% of Americans and cannabis is buying a ticket to Europe.

Below are our observations for April 2022, including year-on-year and month-to-month comparisons as well as leading industries and companies most deserving of attention. 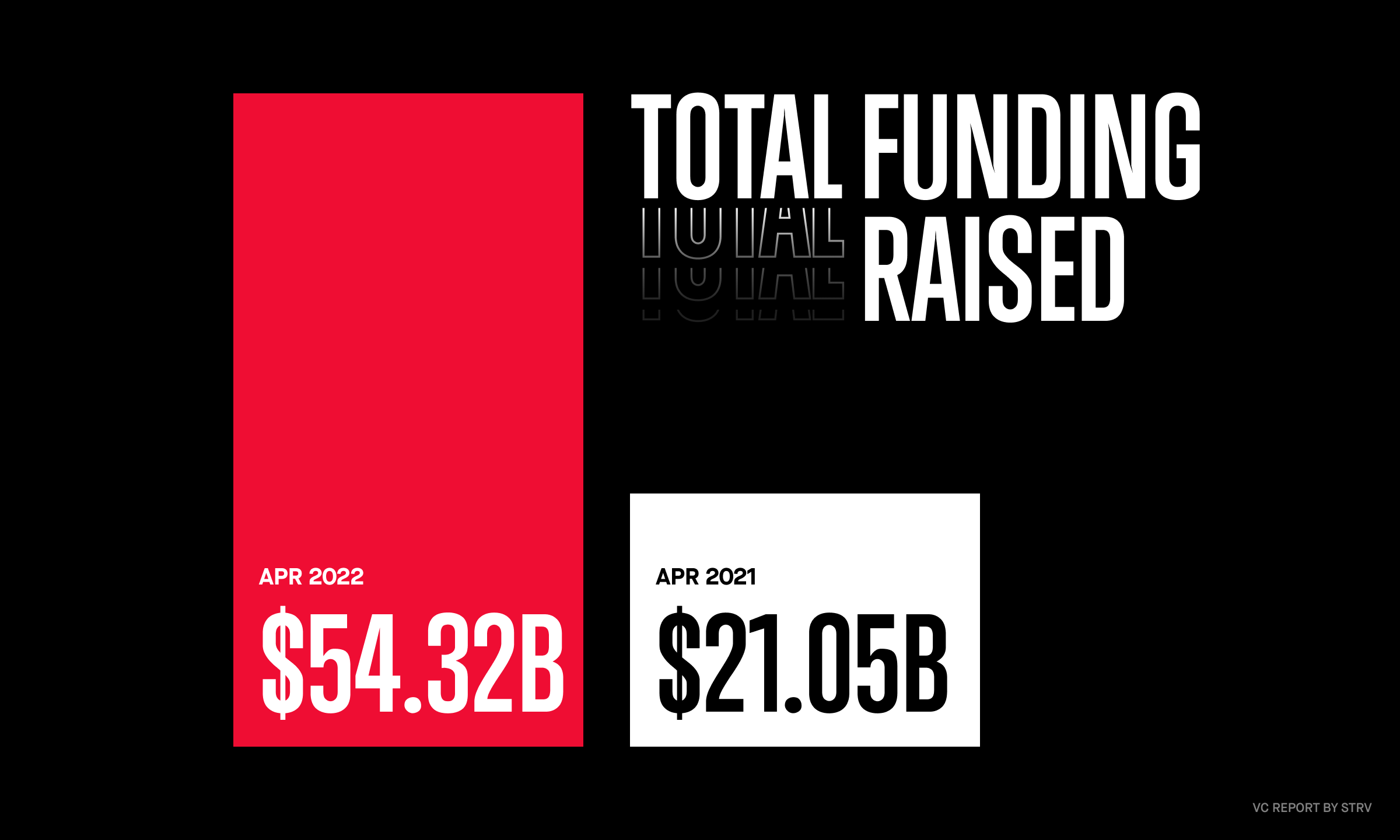 Although it may seem that the world of VC funding is hitting the brakes when compared to the previous month (-15%), the amount of money that’s been poured into startups has actually increased by 9% since March ‘22 — with the median deal size growing from $4.3 million to $7.7 million in just one month (+62% vs. March ‘22). 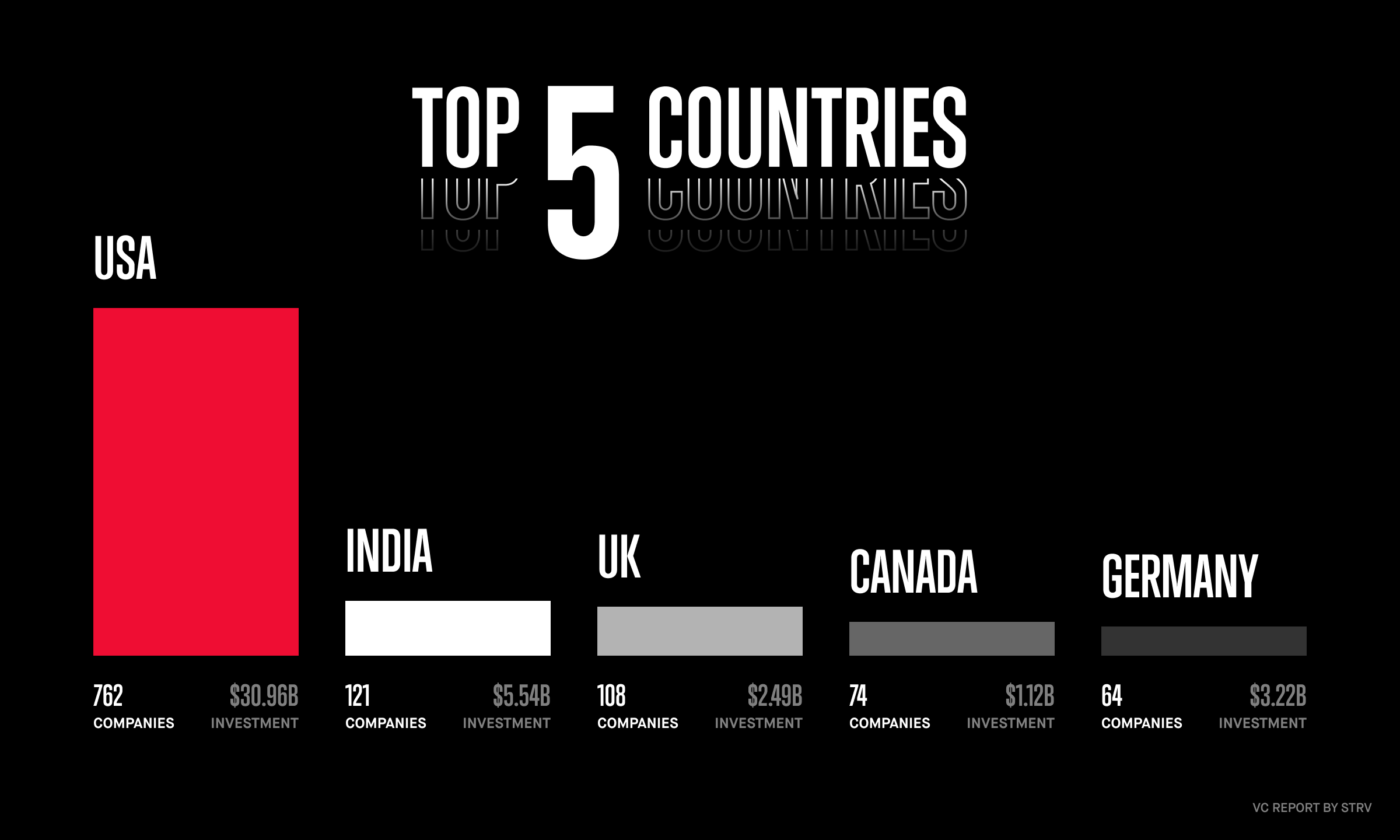 Conclusion: The top 3 countries remain the same, but Canada is back as it continues to gain momentum as the most promising successor to Silicon Valley (more on that in last month’s report). Germany’s spectacular results in overall funding and yearly growth are mainly thanks to foodtech startup Delivery Hero, which secured $1.54 billion in its latest funding round. 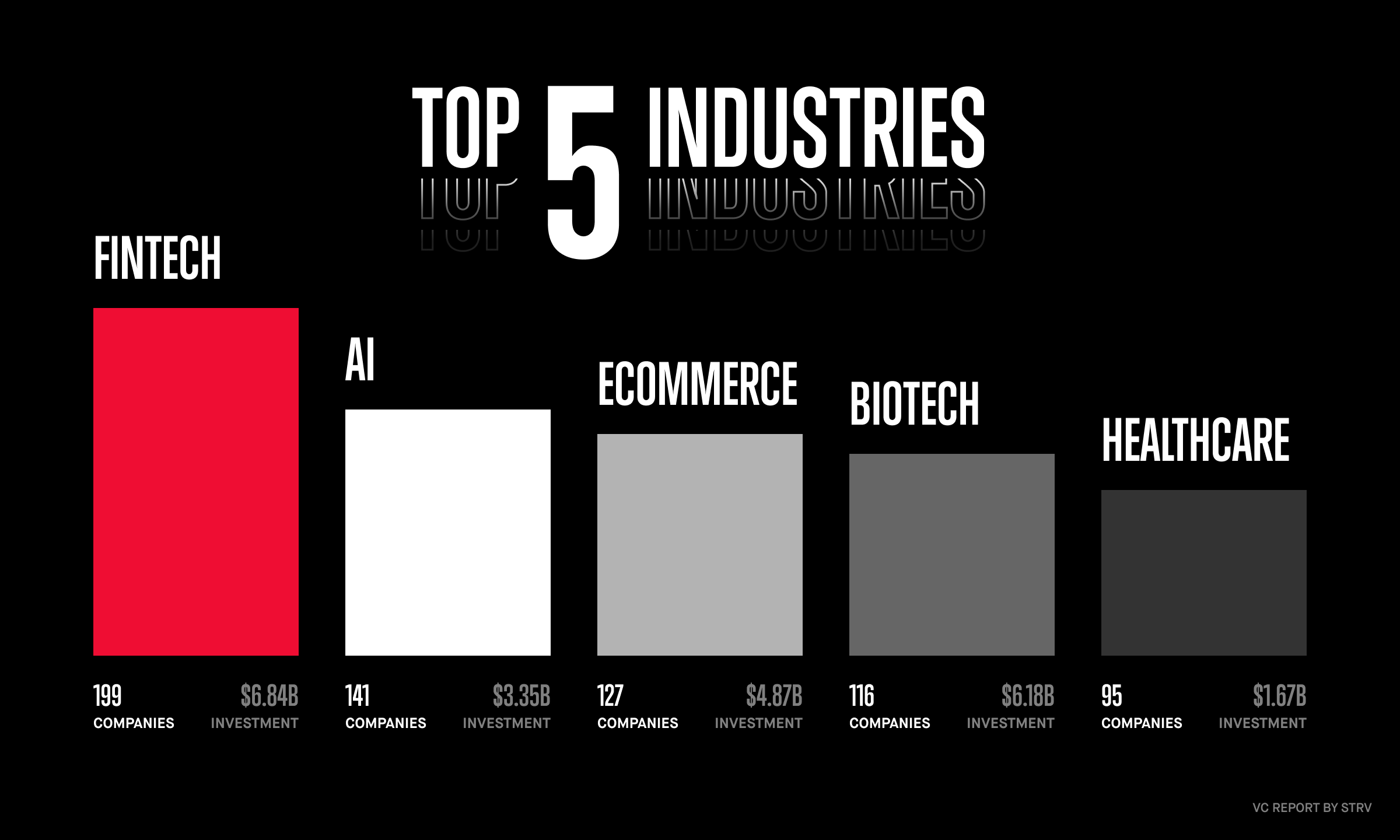 95 companies accumulated $1.67B in investment and saw a 34% year-on-year growth.

As all things metaverse and NFT continue crowding headlines, we’re looking under the hood. Yes, Epic Games raised $2 billion at a staggering $32 billion valuation to build out a metaverse for the younger generation. But the market isn’t prepped for mass adoption just yet.

A Piper Sandler survey found that 48% of teens are either unsure or uninterested in the metaverse, while only 16% of Americans can correctly describe it, according to Ipsos. On top of that, creators aren't that excited about Meta’s metaverse Horizon Worlds monetization plans, mostly due to Meta fees and other costs that could reach up to ~50%.

The NFT world isn’t all rainbows and butterflies, either. According to the Wall Street Journal, NFT sales have dropped by 92% since their peak in September ‘21, going from a daily average of 225,000 to only 19,000, a number that continues to decline.

And sure, big game developers like Konami, Ubisoft and Square Enix are getting into the world of pixelated monkeys — but VGS's The Game Developers Conference’s annual State of the Game Industry Report shows that 70% of game developers don't want to get into NFTs. One developer wrote, "How this hasn't been identified as a pyramid scheme is beyond me." Scam or not, what a ride. A bizarre, deafening, kinda funny ride.

Netflix and Not So Chill

But hey, glass half full POV: Netflix still has 221.6+ million subscribers, making it the largest streaming service in the world. It also reported revenue in line with analyst projections, while its earnings of $3.53 per share left Wall Street estimates of $2.90 in the dust.

The company is raising subscription prices and tweaking its business operations to cut costs and boost profits. But even if the days of maximizing user growth are long gone, Netflix subscribers are just a part of a larger financial picture. It is likely that the changes will make the company’s business model more mature. All’s well that ends well, right?

European startups are dodging the Q1 VC funding slowdown Matrix-style, according to CB Insights and Crunchbase data. The startups attracted $26.8 billion in funding during the first quarter of 2022 — that’s a 20% quarter-on-quarter increase and a 33% year-on-year increase.

In the first three months of the year, 10 European unicorns raised between $1 billion (Checkout.com) and $289 million (PayFit). Twenty unicorns were minted in Europe over that period, more than in any quarter of 2021. Early-stage funding in Q1 2022 was $9.4 billion accounting for 67% of the deal share, a 50% year-on-year increase from the first quarter of 2021 — making it the key success driver for the region. Let's agree that Europe’s a lot of things, but lazy ain’t one of them.

With the success of cannabis businesses in the US, investors are also seeing potential elsewhere. Europe is prepped and ready to be the world’s biggest cannabis market as countries like the UK and Germany contemplate legalizing recreational use. Legal regulations continue to be the biggest blocker for cannabis companies looking to enter Europe but, since medical cannabis isn’t illegal at the federal level across the EU, companies can and likely will take advantage. Because of course they will.

Andreessen Horowitz has unveiled a piloted program for early-stage entrepreneurs: a16z START. In exchange for an unannounced percentage of ownership (specific investment terms are not yet disclosed), a16z START offers early-stage founders up to $1 million in venture capital (twice the $500,000 of Y Combinator) and has six categories in its application form: American dynamism, consumer, enterprise, fintech, games and “other.”

The remote-first program accepts founders on a rolling basis and connects them with partners for advice, potential customers and/or investors while enlarging their entrepreneurial network.

This symbolizes a new trend of investors actively engaging in the startup scouting process within the highly competitive seed market. Sequoia recently debuted The Arc, an accelerator with an emphasis on backing “outlier” founders across Europe and the US with $1 million. Similarly, Techstars debuted Rising Stars, an $8 million fund backed by Twitter and Amazon aimed at earlier-stage, underrepresented companies.

Let's hope this will make the pie bigger and chock-full of talent, instead of everyone fighting for the tastiest piece of one overwhelmed tart.

($53M in funding) The female-focused digital investment and robo-advisor platform provides solutions for all stages of women’s financial lives to help them build wealth. Its offerings include digital investing tools, banking services and career and money coaching, as well as private wealth management for high-net-worth clients who want a personalized financial strategy.

($50M in funding) Studio is an LA-based online learning platform that, like Masterclass, allows people to gain creative skills from renowned professional artists and artisans. The startup was formerly known as Monthly due to its 30-day online courses. Users can learn from instructors like Milk Bar’s chef Christina Tosi and Grammy-nominated singer-songwriter Charlie Puth.

($20M in funding) Developing a platform intended to provide distribution and payment solutions for creators, artists and musicians, the company helps collect, track and share earnings. Among other things, it visualizes performance data and brings clarity to the complicated process of revenue management, ensuring everyone involved in the creative process gets paid.

($2M in funding) Silks is a play-to-earn platform leveraging a blockchain-enabled metaverse to parallel the real world of thoroughbred horse racing. It aims to democratize thoroughbred racehorse ownership for the masses and gamify the experience by utilizing the metaverse and a P2E economy.

($1.9M in funding) Focusing on grassroots ball sports, the sports tech startup is building an app using computer vision AI, design and mobile tech. The company’s app creates match reports, offers chats with team members and helps build one’s profile with statistics. The app is for all ball sports, with an initial focus on football (soccer), tennis, padel and basketball.