The world of Venture Capital (VC) has hit a plateau, with the total capital raised remaining stagnant compared to last month. Fintech continues suffering, biotech is on the rise and attracting funds isn’t getting easier.

Tension reigns in the tech industry. Meta saw its first-ever quarterly revenue decline and Amazon ran at a $2 billion loss — while its stock went up. A total of 186 companies experienced layoffs and Q2 cryptocurrency losses reached $670 million.

Below are our observations for July 2022, including year-on-year (YoY) and month-to-month comparisons as well as leading industries and companies most deserving of attention. 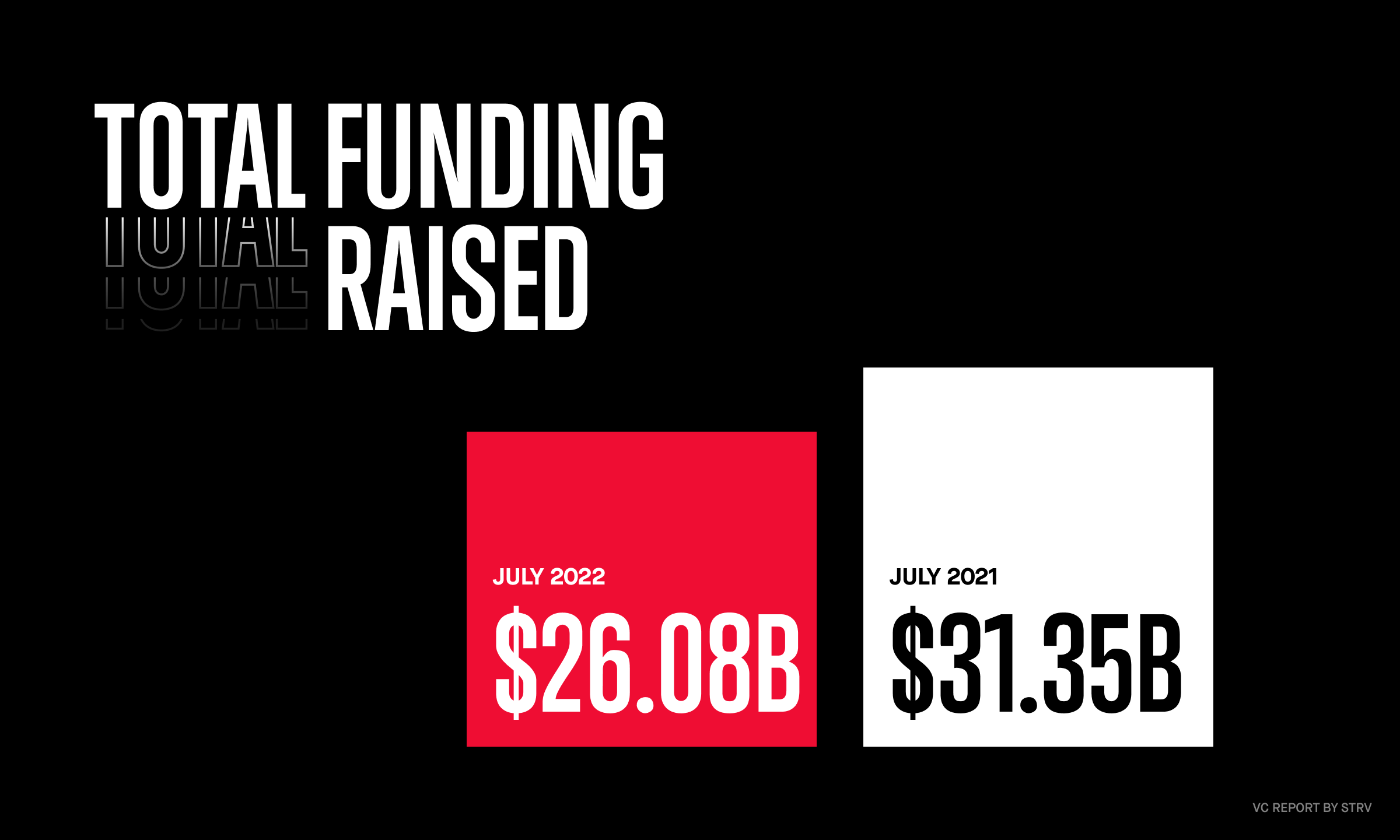 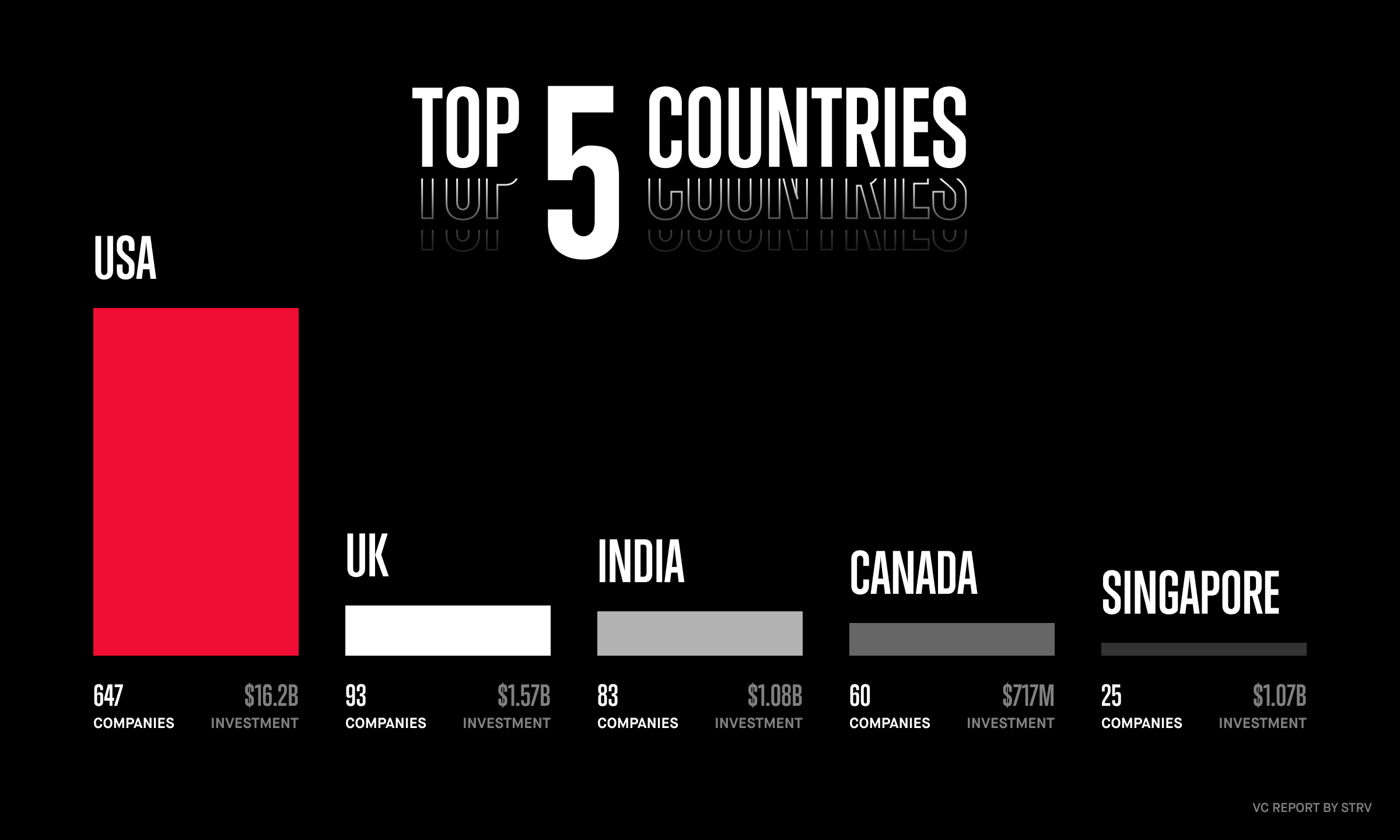 Conclusion: When compared to last month, the number of companies that raised funding and the total capital raised have remained virtually the same. Singapore has made it to the list for the first time since the inception of this report (Sept. ‘21). 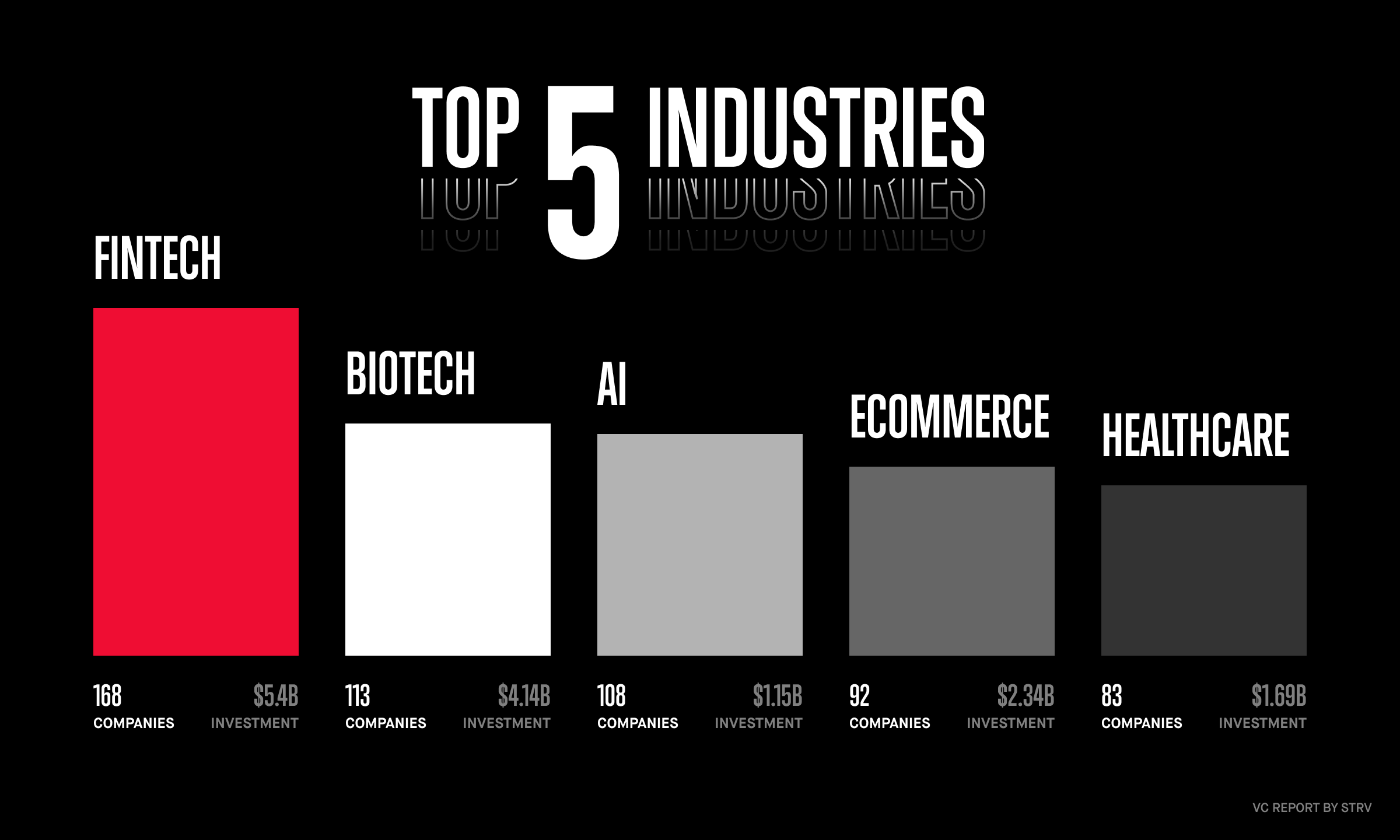 Conclusion: The capital raised in the fintech space shrunk by nearly 2x compared to last month. Biotechnology is gaining momentum moving, from 4th to 2nd place this month with +$1B in total funding vs. last month.

From Riches to Rags

With Q2 wrapped up, everyone’s waiting to see how the tech market weathers the storm. Crunchbase reported that ~$120 billion was invested into startups in Q2 ‘22. Although that’s ~27% lower compared to Q2 ‘22 and Q1 ‘21, it’s still a larger result than in any quarter of 2020.

Here's a rundown of the key industries' performance in Q2 ‘22:

Startups across all sectors are struggling to raise funds out in the wild. Dropbox-owned doc-sharing platform DocSend released data showing that founders have sent up to 10.9% more pitch decks than Q2 ‘21, while investor activity with pitch decks fell 7.2%.

VC firm Tiger Global will slow startup investments in the next two quarters. Its hedge fund losses throughout May account for 52% of all the gains it made in the stock funds since its founding in 2001. Sources speculate that Tiger is sitting on billions in cash reserves. Rawr.

Sit Down, Be Humble

Companies have presented their quarterly earnings reports. Let’s take a look at the highlights.

Fake It Till They Slash It

The domino effect of the overvalued 2021 startup valuations continues as a dramatic turn of events unfolds before our eyes.

Klarna (previously Europe’s most valuable private tech company) saw its worth drop from $46B to $6.7B. FTX will be purchasing crypto lender BlockFi for up to $240M; just last August, BlockFi was valued at $4.75 billion — meaning its price tag is now 5% of what it used to be. That comes to having dropped in value by roughly $14.3 million per day.

Stripe (once the most valuable US startup) cut the value of its internal shares by 28% — lowering its valuation from $95 billion to $74 billion with undisclosed reasoning. Shares of Zomato (the first Indian consumer tech startup to go public last year) dropped 14% and hit a record low on the final day of the lock-in period.

Airlift (an instant delivery service and Pakistan’s most valued startup that once raised over $109 million) is shutting down after unsuccessful attempts to secure a new funding round. Deezer (a French music streaming service) saw its shares sink by 35% during its market debut. Analysts believe Deezer lacks the financial firepower to take on music streaming giants like Spotify.

A Team of No One

As the tech layoff streak continues, July was a bit more merciful than June. A total of 16,104 employees were laid off, which sounds bad until you realize it’s 2% less than last month. A total of 186 companies let staff go in July, compared to 156 in June. Yay?

More than 117 unicorns have announced layoffs this year. Most layoffs have occurred in fintech, followed by crypto and real estate. Here are some of the “lowlights.”

The Cult of Crypto

The cryptocurrency losses of Q2 hit $670M across the web3 ecosystem and are down 52% from the same period last year. About 97% of losses were the result of hacks. Yikes.

OpenSea’s monthly trading volume on the Ethereum blockchain has fallen from $4.86 billion in January to $3.49 billion in April, $2.6 billion in May and just $696.6 million in June. Meta is shutting down Novi, its crypto wallet pilot, though it may repurpose the tech for future metaverse projects.

Although the cryptocurrency market isn’t doing so hot, tech businesses are relentlessly exploring the possibility of investments in case things pick up again. Reddit is launching a new avatar marketplace and Snap is looking to make NFTs into AR filters. So don’t worry. Things may seem all bad, but they’re also weird and confusing.

($39.7M in latest funding) Shares is a social investment platform that allows anyone to invest without minimums. The company intends to use the funds to expand across Europe.

($13M in latest funding) Sweatcoin “pays” users a digital currency based on daily steps. With the new funds, it hopes to attract more users and launch a new cryptocurrency called SWEAT.

($12.3M in latest funding) Pogo is a financial app that uncovers new ways to earn and save money. The company will use the latest funds to expand operations and its business reach.

($1.4M in latest funding) An AI-based editing app that automatically removes stuttering and pauses from podcasts, Resound is now working on enhancing its offer.

($10M in latest funding) The sports metaverse platform allows users to chat in groups, play games, purchase digital collectibles and draft teams during live matches and sports streams. With the new funding, Stadium Live plans to hire engineering and product resources to push out more features that will help retention and monetization and to build their app for Android.