With so much happening in the Venture Capital (VC) world, we’ve expanded our report to include additional industry details, more highlights and the preliminary results for the 2022 VC Investor Ranking — courtesy of Dealroom.co.

The past month saw a 141% year-on-year increase in funding, there may be a slowdown in total VC activity around the corner, the food-delivery sector has reached “winner takes all” stakes and NFTs are hitting a financial lag.

Below are our observations for March 2022, including year-on-year and month-to-month comparisons as well as leading industries and companies most deserving of attention. 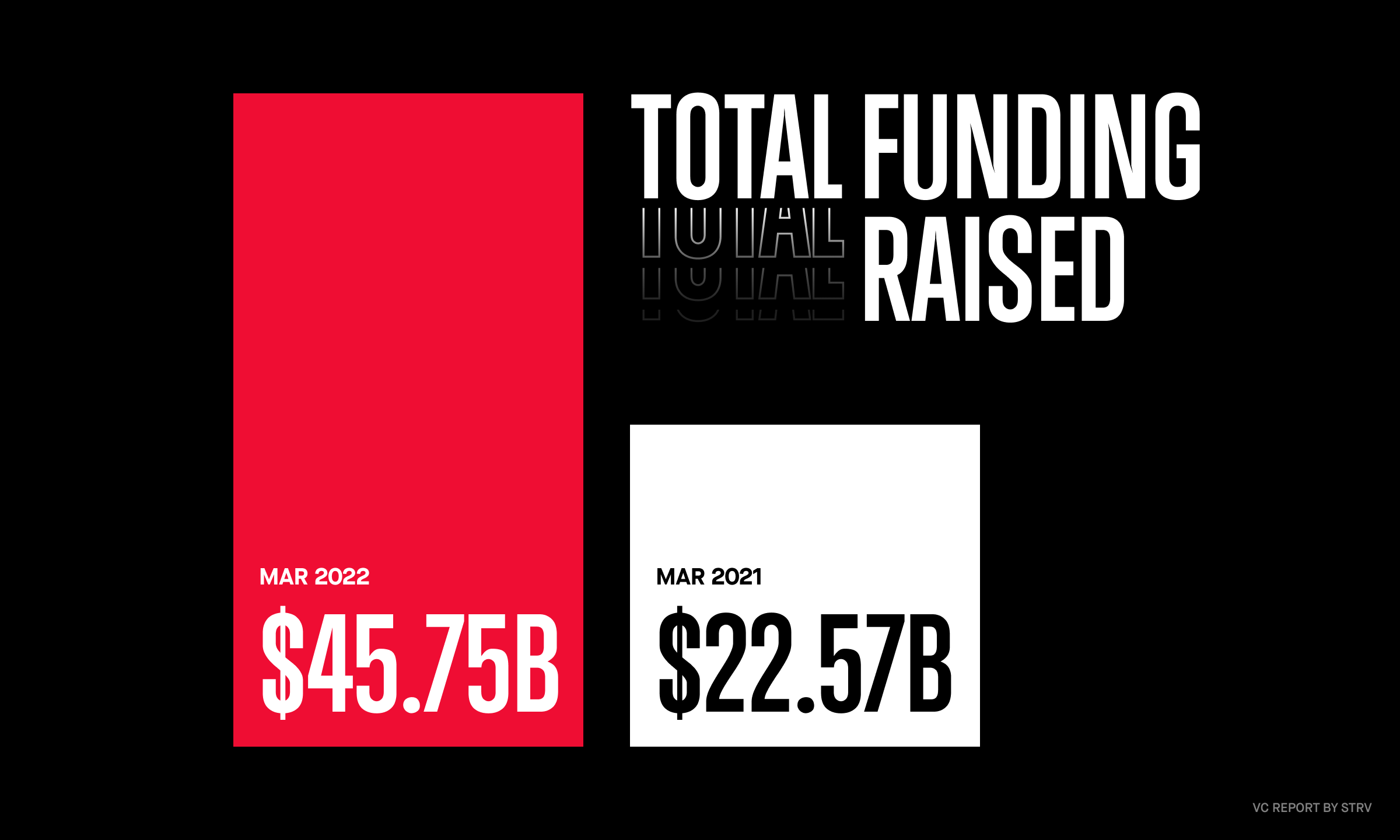 This March, the total number of companies that raised funding was 1,766, compared to 733 in March of last year. This is a 141% year-on-year increase. The total funding raised was $45.75 billion, with a 120% year-on-year increase; last year, March clocked in at $22.57 billion and doubled both the companies and funding compared to January and February. 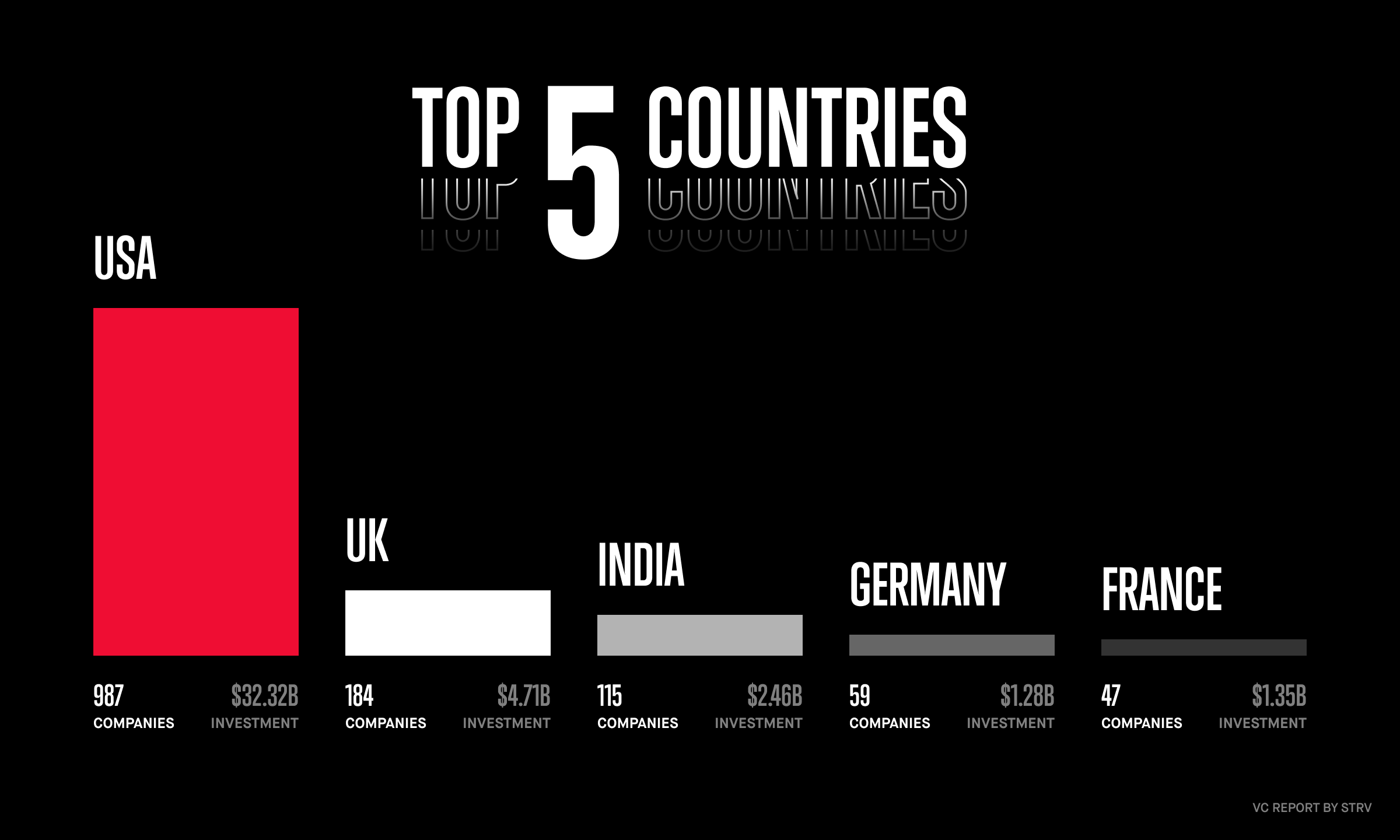 Conclusion: France is back in the top 5 and India shows spectacular performance compared to last year, while Canada — last month’s 3rd top performer — got booted out. 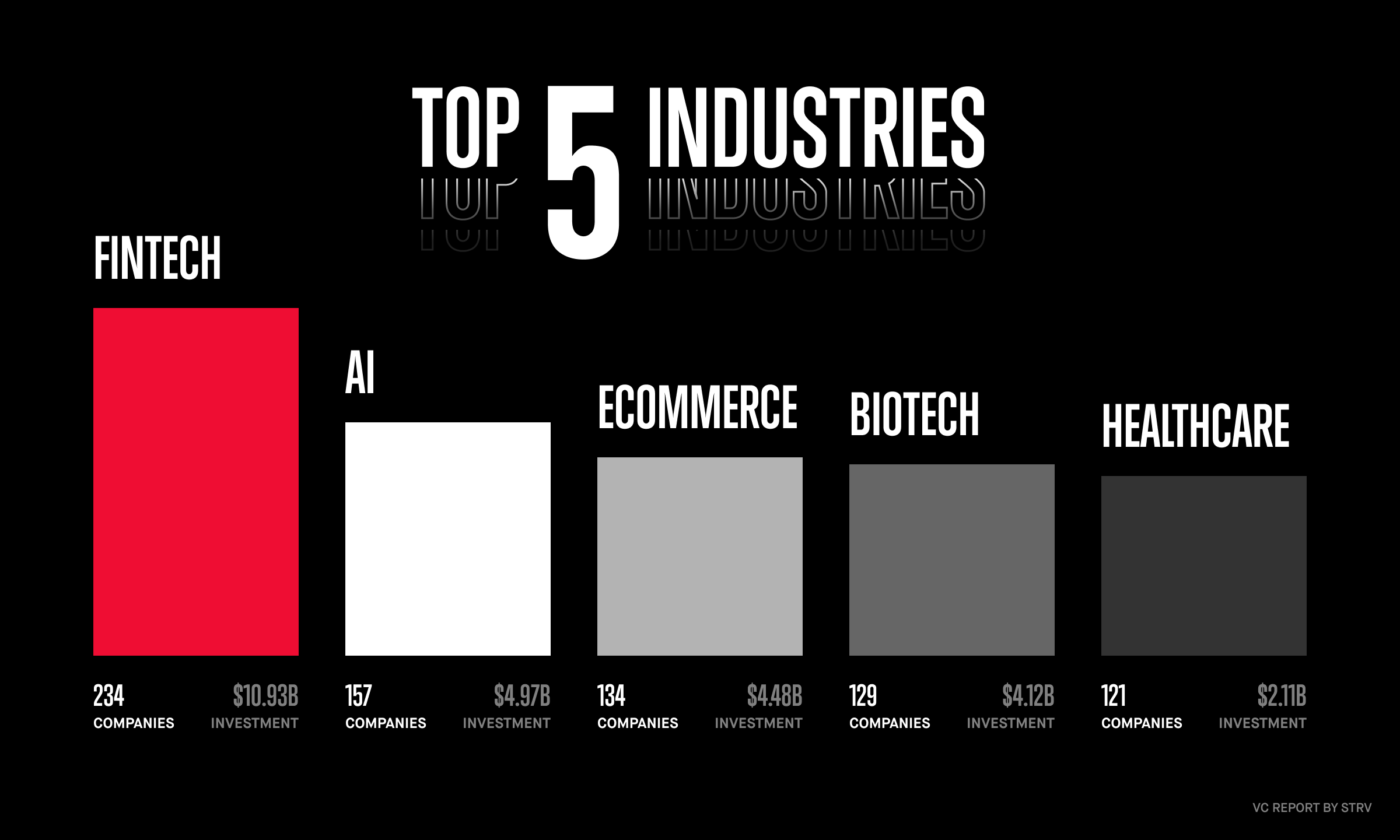 234 companies accumulated $10.93B in cumulative investment and saw a 195% year-on-year growth.

PitchBook dropped a report this month looking at the market trends that helped drive the 2021 VC boom. The report hints that there is a slowdown afoot in total VC activity; in the US, it’s been decelerating every month since its late-2021 highs. We very well might be seeing the early stages of “it was fun while it lasted.”

PitchBook reports around $235 billion in total volume in its records for Q4 2021 and $161 billion in Q1 2022. Compared with the same period last year ($170B in Q1 2021), the difference isn’t that drastic. Presumably, a lot of early-2022 deals are in reality late-2021 deals, meaning that this year's Q1 data is slightly skewed. The second quarter may prove more illustrative of where the market truly is.

What About Toronto, eh?

The tech industry has been on the lookout for the next Silicon Valley, with Miami and Austin being the most prominent candidates for the role. However, as per The NY Times, Toronto is growing faster than both of those cities, and now hosts the third-largest tech hub in North America, behind New York and Silicon Valley.

Apart from Drake and The Weeknd, Toronto also boasts top talent in research and engineering from the University of Toronto and the University of Waterloo. The city is the tech hub for big tech players — including Canada’s own Shopify, Google, Apple and Stripe — and its immigration policy has made it a true melting pot, with ~50% of its residents born outside the country. This combination of academia, Big Tech and a diverse population has fostered novel collaborations, like Uber’s self-driving car lab and Google’s “neural networks” lab.

But hold your moose. Toronto still has a long way to go. Between 2021 and 2022, Toronto startups garnered $5.4 billion in investments compared to $132 billion for startups based in Silicon Valley. Sorry.

The food-delivery sector is another case of a pandemic success story grounded in a mismatch between valuations and the value of niche startups. But, as always, the market is a just ruler, and leading companies in the industry are facing their comeuppance.

The food-delivery battle is now a “winner takes all” war. All this anticipation making anyone else hungry?

Another One Bites the Dust

At the beginning of March, OpenSea’s trading volume was down 30%. The decline has only accelerated since Russia invaded Ukraine. With Mark Zuckerberg confirming that NFTs are coming to Instagram soon, we may see the blockchain tokens go mainstream. It’ll be interesting to see how the situation evolves throughout 2022 and we will surely keep you posted. For now, all our Cool Cats and Doodles and Thingamajigs are safe.

In other NFT news, Yuga Labs — the parent company behind Bored Ape Yacht Club — acquired the rights to CryptoPunks and Meebits, both owned by Larva Labs. Across the three widely-popular collections, Yuga owns the rights to ~$5.5 billion in NFTs, which is ~22% of the current total NFT market cap. So don't be surprised when you start seeing headlines about Yuga Labs’ inevitable anti-monopoly lawsuit.

($55M in funding) The so-called “rowing equivalent of Peloton,” Hydrow develops a connected indoor rowing machine designed for full-body workouts. It offers a connected rowing machine and around 4,000 exercise classes, with virtually all of them taking place on the water rather than in a gym or classroom. This allows you to row in sync with the instructor taking the class.

($10M in funding) Space Runners is the first Metaverse fashion brand focused on cross-chain fashion items that can be plugged into any metaverses and games. In its first collection with former NBA Champions Kyle Kuzma and Nick Young, it launched the NBA Champions Sneaker Collection in December — which sold 10,000 NFTs in nine minutes. Space Runners now has over 500,000 members across Discord, Instagram and Twitter.

($6.5M in funding) Pianity is a music NFT platform where musicians and their communities gather to create, share, trade and collect limited-edition tracks. With Pianity, fans and collectors can “give back” to artists by purchasing these tracks, which are indefinitely stored on the blockchain. The platform redistributes 50% of its earnings in tokens to all active users each week.

($9M in funding) Immerse is a virtual reality language teaching and learning platform in the Metaverse. It is used in partnership with the world’s top language schools to deliver VR English language learning experiences to students in the Asian, European and Latin American markets.

($22.1M in funding) Dance is an e-bike subscription service where users pay a monthly fee that covers their bikes and provides an all-inclusive support package. The subscription includes a bike concierge, maintenance and theft replacement insurance — all via the company’s own hardware and software which allows for fast repairs through its warehouse and logistics setup.

STRV partner Dealroom.co is wrapping up its fifth annual Global Venture Capital Investor Prominence ranking and we’re able to share a sneak peek at the preliminary results (we will share the final list next month). Its methodology uses attributes like the number of unicorns and future unicorns backed by investors, how early investment into a unicorn was made and the number of investment rounds in the last 12 months.

A record-smashing 2021 has meant a lot of movement among the players, with some funds riding the wave. Here’s how the top of the global combined ranking is shaping up, with ranking shifts compared to the previous year: