The Venture Capital (VC) funding market is continuing its downward spiral after peaking in March, with the total capital raised down by 44% since April. Companies’ reactions include layoffs, suspended hiring and strained optimism.

The past month featured the same leading industries we’ve gotten used to — only this time, a year-on-year decrease is more common than growth. In other news, the blockchain market is keeping everyone on their toes and we may soon be going password-less.

Below are our observations for May 2022, including year-on-year and month-to-month comparisons as well as leading industries and companies most deserving of attention. 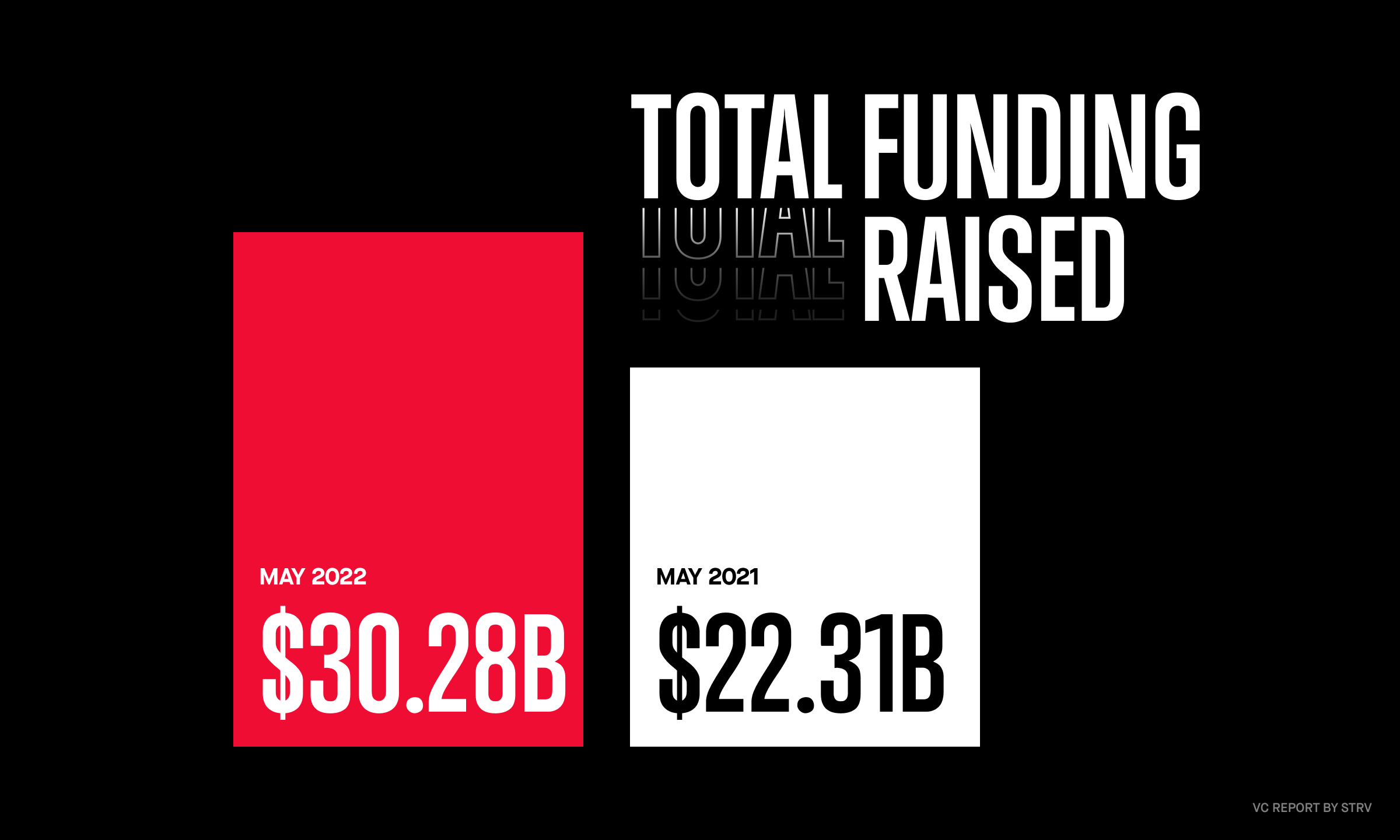 The same goes for the slowing average growth rate of the total monthly funding amount for 2022 vs. 2021, which was 105% for the previous four months year-on-year, meaning this month is down by 69% vs. the benchmark. While the overall ‘21 trend was a constant increase, ‘22 has the opposite trajectory. We’ll see which month the curves meet and the reverse trend officially begins. 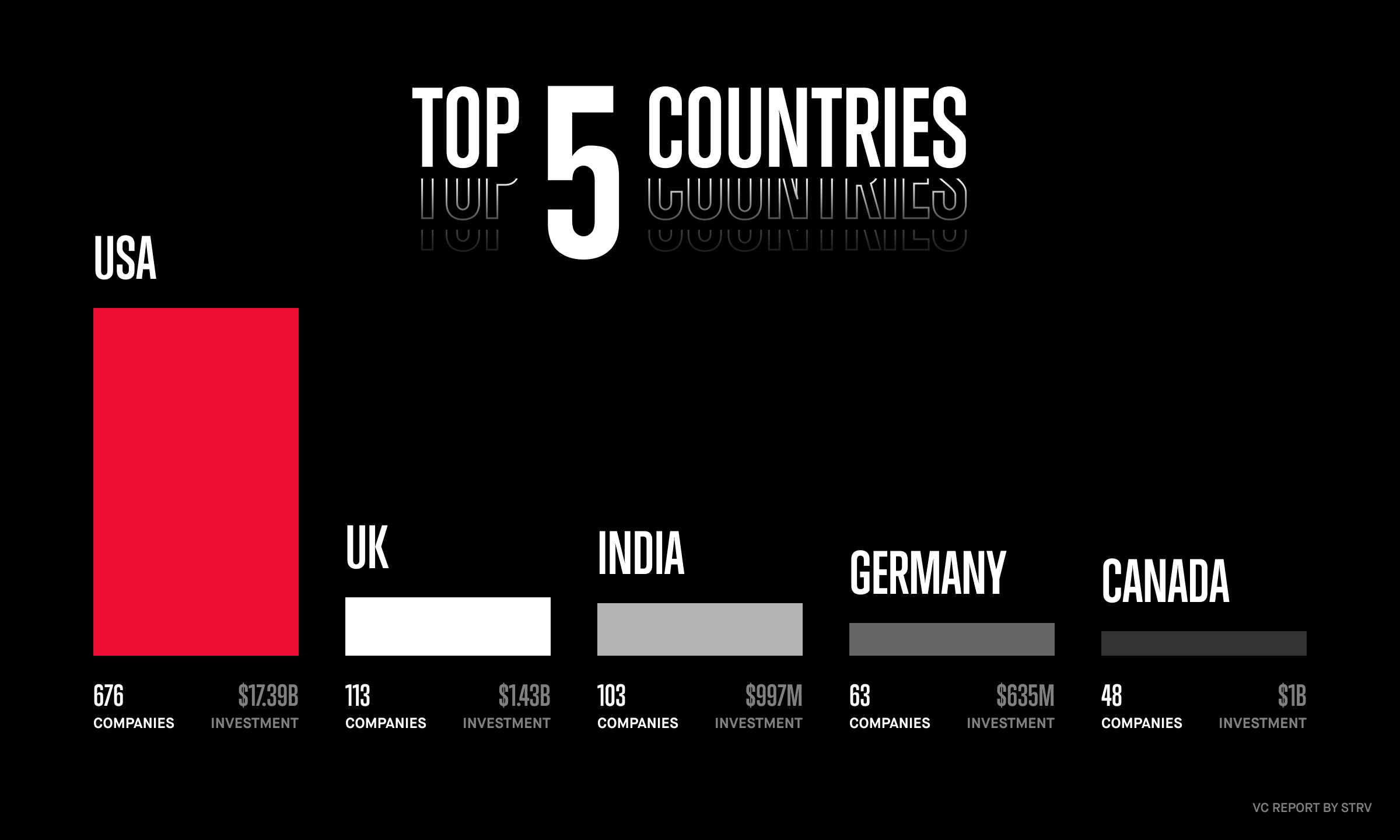 Conclusion: Remaining the tech industry’s biggest player, the US market has downsized by almost a half (44%) compared to last month, which says a lot about the current global state. This trend is present in other markets as well, on an even bigger scale: India’s startup capital is 20% of what it was last month, Germany’s is at 33% and UK’s at 50%. 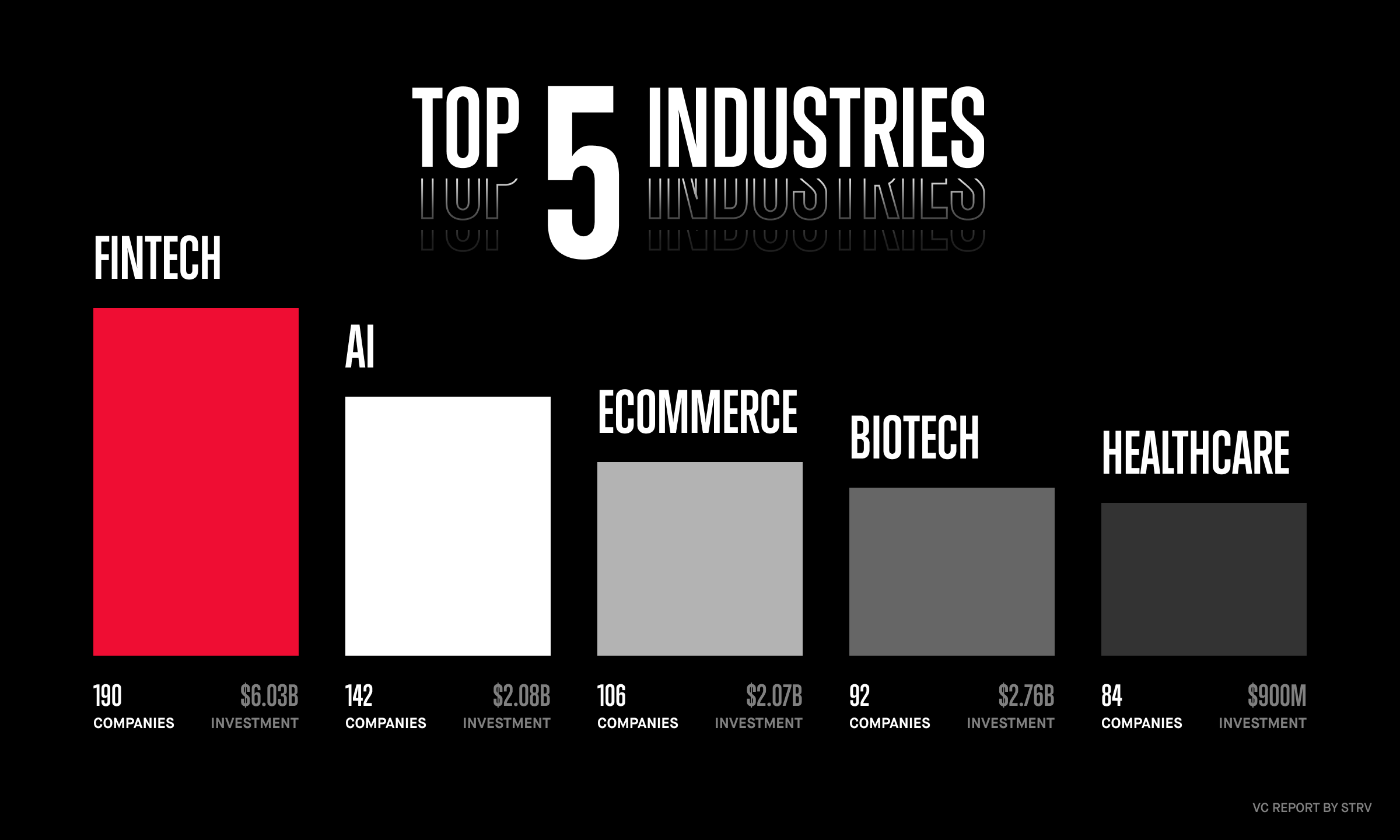 92 companies accumulated $2.76B in investment, a 2% year-on-year increase.

Conclusion: The fintech space continues to stay strong and grow in terms of raised capital compared to last year's performance, while the rest of the industries start to slowly fade.

And Away (Down) We Go

The situation in the world of tech keeps getting worse. Worldwide inflation is hitting consumer pockets, the war in Ukraine has accelerated Europe’s energy crisis, supply chain challenges persist… and it all impacts the tech industry.

In a memo to employees, Snap CEO Evan Spiegel warned that due to macroeconomic challenges, the company likely won’t hit its revenue and earnings growth estimates in Q2, which made Snap's stock dip by 43%. Shares of Pinterest dropped by 23%, Google by 5%, and Twitter and Meta by 5.5% and 7.6%, respectively.

As the leading startup sector, fintech isn’t doing so hot, either. Investors are affected by the impending recession, and companies are cutting expenses and suspending IPO plans. Klarna is reportedly looking to raise funds at a 30% discount to its $46 billion valuation, while rival group Affirm has lost roughly two-thirds of its stock market value since the start of 2022. And Stripe’s feeling unsure if it can still justify its $95 billion valuation given the current economic climate.

Outside of tech, Target and Walmart stocks have also performed poorly mostly due to shifts in US consumer spending patterns (more spending on necessities vs. discretionary merchandise) as inflation hits food and fuel, Verdence Capital Advisors reports. It’s clear that consumers are turning to credit and savings in order to maintain their average level of living.

Fasten your seatbelts, ladies and gentlemen. It’s gonna be a bumpy ride.

Startup employees are getting laid off like nobody’s business, based on data from Layoffs.FYI.

Subscription-based businesses appear to be getting the worst of it. Many of them came out of the pandemic swinging but now that the market’s done a 180, they’re scrambling to adjust.

Blockchain: Who Even Knows Anymore

The first quarter of 2022 was great for crypto-oriented startups, breaking the record in raised venture capital. It’s unclear how much of that was driven by spry investors blinded by the hype, but it's fair to assume more than a few.

In its Q4 2021 Shareholder Letter, Coinbase was already pointing out warning signs, like the crypto market cap being down by 20% and crypto asset volatility down by 10%. And wouldn’t you know it; in Q1 2022, Coinbase saw its share prices fall, with results showing that the number of monthly transacting users would continue to drop.

According to The Wall Street Journal, the NFT market is collapsing. A daily average of 19k NFTs were sold during the first week of May, a 92% drop from the 225k daily average in September. Also in May, one of the largest stablecoins, TerraUSD, and its sister currency Luna fell from their $1 value to 29 cents, a 70% drop leaving some investors broke and devastated.

Still, amidst all of that, Spotify announced the launch of Spotify Island in Roblox, Starbucks is entering the world of web3 with a collection of NFTs, Instagram is testing NFTs with some of its creators and Google’s cloud team formed a new web3 group offering services to developers building on the blockchain.

So, glass half full or half empty? At this point, it’s a coin toss.

Let’s talk something simpler: Passwords. Yuck. They cause 81% of data breaches, yet 65% of people still reuse the same passwords across all of their online profiles.

As for organizations, one survey found that while 85% of respondents stated they’d like to use fewer passwords, 72% of organizations think that end users would prefer to continue using passwords out of habit. But, would they really? Apple, Google and Microsoft seem to disagree and are prepping no-password sign-ins for 2023, letting users sign in with their phones.

Why the change? A password-less system will make it much more difficult for hackers to compromise login details remotely, since signing in requires access to a physical device. No more leaked celeb photos. Sorry, TMZ.

Disney+ surveyed its subscribers in Spain about password-sharing habits, a move that prompted analysts to assume it may start cracking down on the habit — especially following Netflix’s plans to put an end to password-sharing because it costs the company up to $6.25 billion in annual revenue. (Judging by the news, the initiative isn’t going too well.)

Will a passwordless login system convert into more cash for the streaming giants? We’ll see. If so, hey, at least we'll have two tech companies survive 2022.

Shady's Back, Tell a Friend

To slap a nice bow onto this chaotically packaged month, let’s end with a comeback story.

Adam "WeWork" Neumann is back with another venture called Flowcarbon that sells tokenized carbon credits on the blockchain. Because what better way to redeem yourself than with a new crypto startup, right? Apparently (and surprisingly?), it was the right move; the company has raised $70 million in funding led by Andreessen Horowitz’s crypto division, a16z crypto.

The obvious question here is: Do Andreessen and Horowitz have Apple TV? And, you know, the news? All PR is good PR, sure, but all those headlines plus “WeCrashed”...

($62.5M in funding) Mashgin is an AI-based self-checkout system that can be deployed in a matter of minutes and at the fraction of the cost of Amazon Go. The system is already being used across hundreds of locations by tens of thousands of people every day.

($16.5M in funding) An emotional support platform, Circles enables people to be heard, understood and supported by others going through the same issues in their lives — such as the loss of a loved one, parenting issues or divorce. Groups meet live for 60-minute video meetings and can communicate via the online chat at any time. Circles users can also access personalized content, including self-help exercises, blogs and webinars, all at no extra cost.

($9.5M in funding) buywith is an online shopping marketplace for retailers and brands where influencers and experts can broadcast online shopping sessions and inspire followers to make purchases via a highly engaging experience. Thanks to the platform, brands can generate more revenue from their ecommerce activity and increase their ROI.

($5.3M in funding) A social wagering platform for NFTs that transforms sports betting into a more social activity, Stakes is a free-to-play platform based around “social wagering.” Users can make sports predictions that are publicly available for friends and other users to wager against.

($2M in funding) Kabata is a fitness platform intended to provide workout equipment, gamified progression and data-driven coaching. It provides a connected app which creates a six-week workout featuring self-guided and trainer sessions, enabling fitness enthusiasts to get workout results in less time, all in the comfort of their homes.