The worst of this “VC funding correction” may be behind us as the market catches a breath, with the total funding up 56% from the previous month. Some still warn of an inbound collapse, but data shows we should be okay.

Fintech and biotech are riding high, as is the UK and web3 — now with Y Combinator’s support. We’ve got 43% fewer new unicorns prancing around compared to 2021, social media apps are slapping fancy stickers on borrowed goods and Twitter peeps aren’t vibing with Elon.

Below are the month’s most notable news and numbers, including year-on-year (YoY) and month-to-month comparisons as well as leading industries and companies worthy of attention. 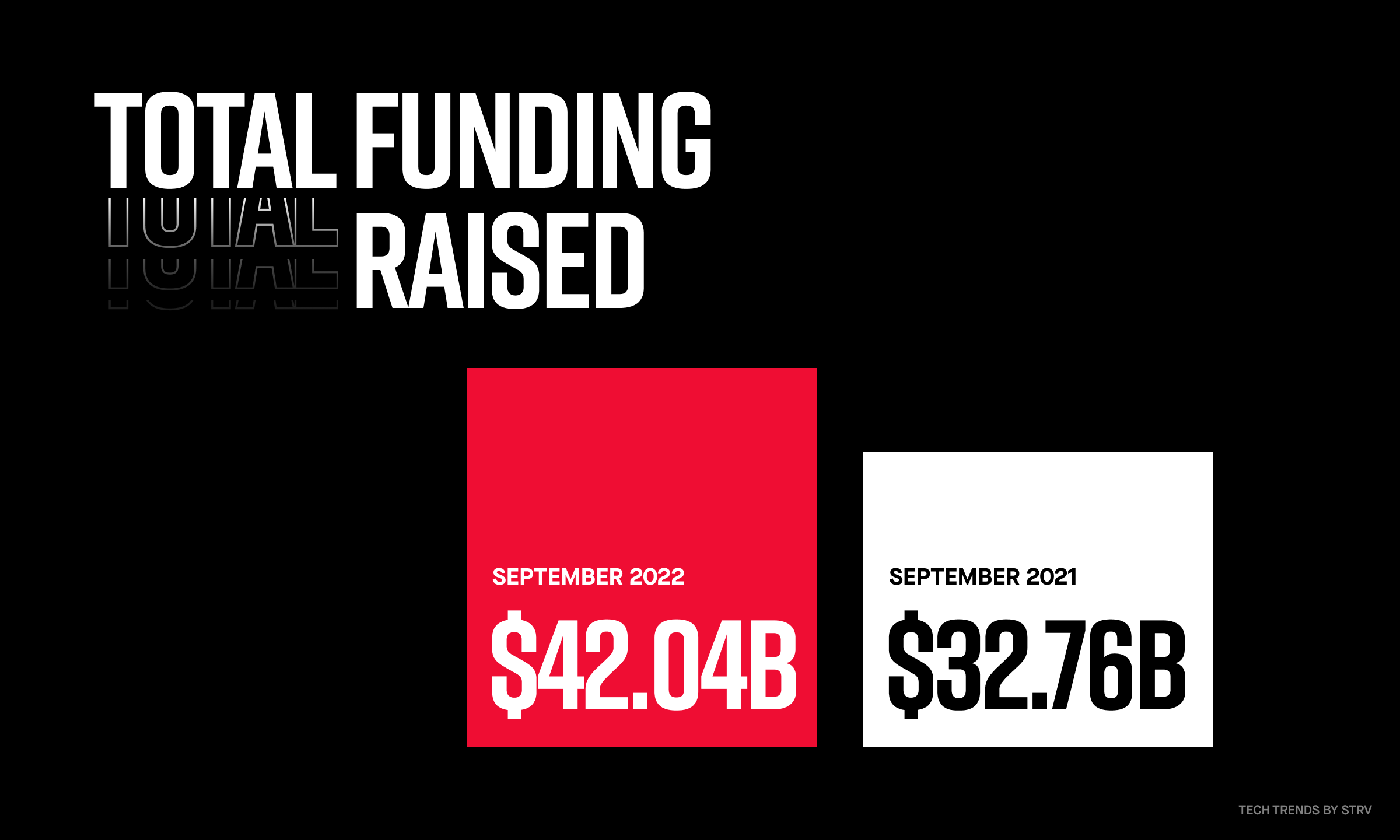 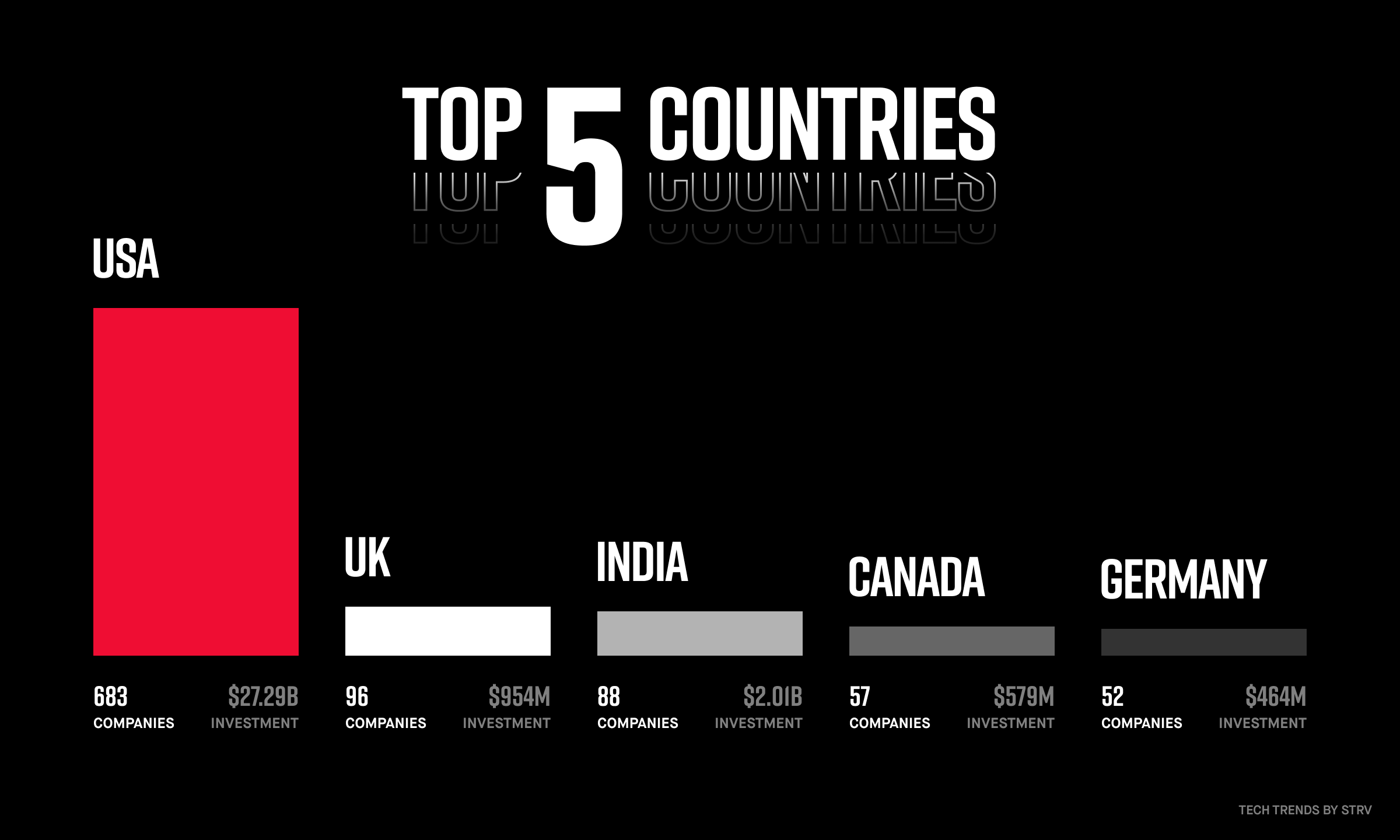 Conclusion: The market is slowly recovering from the macroeconomic shock that hit the world in the last six months, with the total funding beating last year’s numbers and being 56% higher than the previous month. Despite skepticism coming from the likes of Bloomberg, a look at the data suggests the tech world won’t collapse any time soon.

The top-performing countries are experiencing growth in the number of startups scoring investments. However, the majority of them have less money in the funding pipeline, meaning that the money is now scattered among smaller players across the globe. 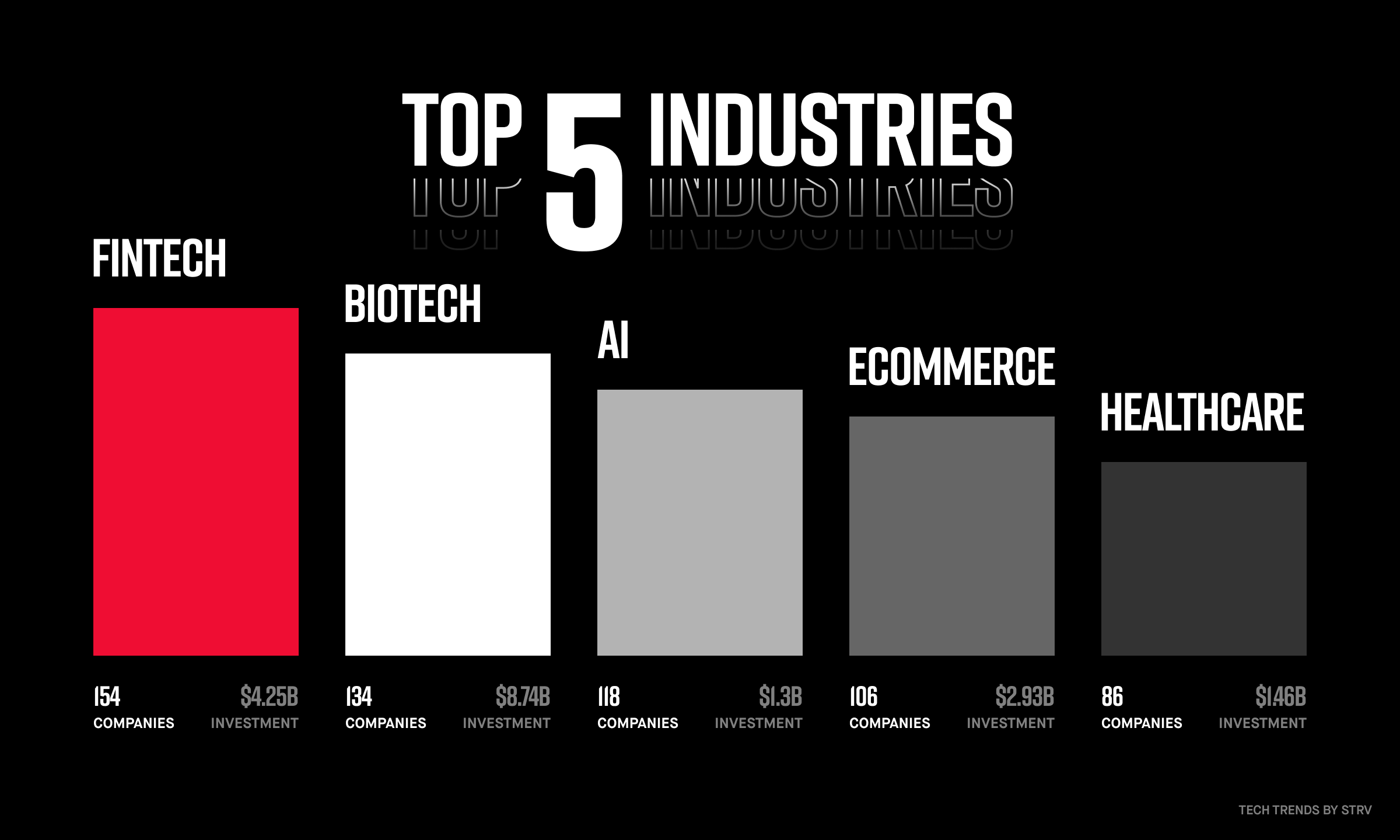 Conclusion: While fintech continues to be the hottest sector in the tech space with oversaturated startup competition in neobanks and crypto, biotech is also having a great year — with steady YoY growth as it looks over all the fancy DeFi startups’ shoulders.

99 Problems But Tech Ain’t One

Let’s talk Venture Capital. The tech market is a bit confusing at best, controversial at worst. For the cynics, not even all the money flowing in can offset a few less positive trends.

Compared to last year, 2022 has seen 43% fewer new unicorns worldwide and corporate VC funding is down 32%. Global IPO volumes dropped by 44% and the US market is heading towards its lowest proceeds since 2003 — mainly because around 87% of companies that IPO’d in 2021 are trading below their initial offering price.

On top of that, the stock market experienced its worst day of 2022 following an August inflation report that was even lousier than expected. It’s really no surprise that big players are still pursuing various ways of cost-cutting:

But not everyone is running for cover. ​​SoftBank’s Vision Fund 2 is now worth 19% less than the $49 billion they put into it, yet the investment group is considering a Vision Fund 3.

We’re clearly living through a VC funding correction. Some still say everything’s about to come crashing down, but that just might be a teeny bit exaggerated.

The world’s biggest tech clash is happening right on your home screen, in the social and visual media space. We’re talking Instagram, TikTok, BeReal (currently no. 1 free iPhone app in the US App Store), Twitter and YouTube. And they’re all shamelessly adding each other’s unique features to their own products to nab the competition’s users.

Instagram is perhaps the most aggressive, with many new features, tests and pivots in its product strategy. Current actions being taken:

The streaming competition among big players like Netflix, Amazon and Disney+ is heating up as well. Together, the companies have spent up to $50 billion to enrich their content libraries. Every three hours, YouTube adds as much content as Netflix and Amazon’s catalogs combined.

And fun fact: The estimated number of minutes watched on TikTok in 2021 is 22.6 trillion, compared to Netflix’s 9.6 trillion. The biggest difference? TikTok spent virtually $0 on its content.

With all that happening, who are you betting on in this social media Squid Game?

One area of the tech world that’s especially resistant to problems is web3, a.k.a blockchain, a.k.a. crypto, a.k.a. sheesh, my wallet got hacked again. Indicators of its relentless popularity are Y Combinator’s (YC) new “batch” and web3 innovations of the world’s biggest brands.

Security is a big focus point for YC’s web3-oriented startups due to the rise in crypto hacks and phishing attacks. It’s also all about making crypto more user-friendly, building consumer-facing products (wallets, community/group-based investing) and entering the DeFi and NFT space.

But the YC hopefuls better check the competition; Robinhood released a beta version of its web3 wallet (to 10k users) that will allow trading 20+ cryptocurrencies without fees.

On the individual companies level:

The More You Know

To keep you entirely caught up, a few highlights worthy of attention:

($58M in latest funding) Podimo is an open podcast platform that offers a subscription service for creators. The company intends to use the funds for market expansion, content and enhanced investments in tech and product.

($7.9M in latest funding) Niftify is a platform where users create, sell, buy and swap NFTs. It has released a no-code NFT store and NFT marketplace platform builder, allowing anyone to create and operate custom NFT stores and marketplaces, and letting creators mint and launch NFT collection on their websites and under their domain names. The company intends to use the funding to transform into a tech platform providing tools for NFT stores.

($2M in latest funding) Sintra is a social-powered NFT investment app that will leverage its new funding to accelerate product testing and development of new in-app features, and to drive comprehensive recruitment and marketing efforts — tied to Sintra's rich pipeline of activity.

($1.5M in latest funding) ZERO10 is a fashion-tech company building AR platforms for fashion brands, ecommerce and physical retailers. Essentially, it is a digital clothing “try-on” solution. Its plans with the recent funding remain unknown.

($100k in latest funding) Curastory is a video content creator tool that helps student-athletes by connecting them with brands in need of video content. The $100k comes from Google and consists of non-dilutive funding, hands-on support and enhanced Google visibility — allowing Curastory to accelerate its growth and help thousands of creators worldwide.